The Mount Kenya trek is a challenging and enjoyable journey to Mount Kenya's highest trekking peak (Point Lenana) at 4985 metres.  From the summit there is a beautiful view of the dramatic volcanic massif and the two main peaks of Batian and Nelion, as well as long views over the central plains of Kenya. It has long been a popular and very attractive hike through an ancient landscape dotted with glaciers, rock spires, high tarns and some beautiful unique flora and fauna like the giant groundsels and the odd looking rock hyrax which has evolved from the elephant.

There are two popular trekking routes on the western side of the mountain called Naro Moru and Sirimon. For both the starting point is the small town of Naro Moru which is about 4 hours drive from Nairobi. Our charity Moving Mountains has done a lot of work in this area and you can visit some of the schools we have built. In Naro Moru we recommend staying at a local hotel called the Blue Line which we have helped to develop over many years, or the more salubrious Naro Moru River Lodge.

We would recommend doing the trek by ascending and descending each of the routes to give some variety, and you can either camp or stay in huts along the way. Our guides are well trained with extensive experience on all routes, and they have international first aid certificates. We provide the equipment for camping and cooking, plus the porters who will carry a rucksack up to 15 kgs. We work on a minimum team number of two for our prices, so there would be a supplement for individuals.

The itinerary starts in Naro Moru but we can provide all the optional extras if needed, including private transport from Nairobi, accommodation in Nairobi, Naro Moru or Embu (for anyone using the Chogoria route for their ascent or descent), upgrades to hut accommodation on the mountain and safaris or visits to our Moving Mountains projects.

Testimonial: "Firstly I would like to say a huge thank you for helping to organise a fantastic trip to Mount Kenya! It really was an unforgettable trip and we all hugely enjoyed it!

The organisation of the whole trip was faultless and I was so impressed with everyone I have met here from AA. Cyrus was fantastic and we couldn't have asked for a better guide, along with the brilliant team of porters, not forgetting the fantastic cook. He fed us very very well! "

Video of summit from Mackinders Camp on the Naro Moru Route

Sirimon and Naro Moru routes begin on the western side of the mountain.

Is a climb on Mount Kenya similar to Kilimanjaro?

Mount Kenya is its own National Park with a stunning landscape of interesting endemic flora and flora as well as jagged summit peaks and glaciers. It differs from Kilimanjaro in that there is a great deal more wildlife to be spotted, as well as numerous high tarns and traditional higher peaks! For many it is a much more scenic and peaceful experience with much fewer numbers and smaller teams ascending the mountain, many have been up and down without meeting anyone other than the Kenya Wildlife Service staff at the Park Gates and the camps.

From a distance, the jagged volcanic peaks are the remains which emerge from the centre of an eroded volcanic dome cut by radial valleys and ridges, standing proudly over the plains and savannah below. Elephant, buffalo, Colobus monkey, bushbuck and giant forest hog can be seen in the foothills of the 228 sq. mile park. From the lower forests of bamboo, the landscape develops to unusual high-altitude equatorial vegetation on the shoulder of the mountain with giant heather, lobelia and groundsels. Read more about the type of terrain you'll encounter on a Mount Kenya trek and the level of fitness required under 'Mount Kenya advice. 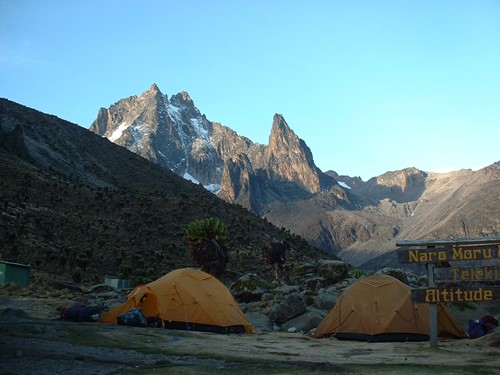 Mackinders Camp on the Naro Moru route with the dramatic peaks of Batian and Nelion being the highest, and Point John on the right. Point Lenana is to the right of Point John slightly set back.

When is the best time to climb Mount Kenya?

The best months to climb Mount Kenya are traditionally January to March and June to October but it can be climbed all year round. The rainy seasons tend to be in April, May and November but nowadays climate change has made it more difficult to predict.

What kit is needed on Mount Kenya?

To successfully summit Mount Kenya you'll need kit which keeps you warm, dry, protected from the sun/rain and comfortable in the various environments that you'll find yourself in on the way to the summit. There is a detailed list via the 'More Information' menu under 'Mount Kenya trek kit list'. A couple of basic maps which show the routes on Mount Kenya can be found in the Mount Kenya Maps and Books more information page.

Testimonial: "Just wanted to email to say thank you to AA for a fantastic trip up Mount Kenya. Rob and I felt very well taken care of by all the Kenya staff from the moment we arrived. The mountain was a real experience and Cyrus and our porters were simply marvellous. The summit was unbelievable, absolutely stunning views. A particular mention for Kamau who drove us everywhere: he was a great driver and such a lovely guy. We spent our last meal at carnivore which was an experience and asked Kelly and Kamau to join us and couldn't have ended our trip in a nicer way. Kelly's life story was simply an inspiration!

It is normally possible to add or amend dates if the advertised ones don't suit, just drop us an email or click on the 'Ask Us A Question...' box on the website and we'll do everything we can to help. The advertised price is based on a minimum group of 2 people, please contact us for the single person supplement cost or for extra nights, safari options, etc. Full details of the extras that we can provide can be found under 'Mount Kenya optional extra costs'. 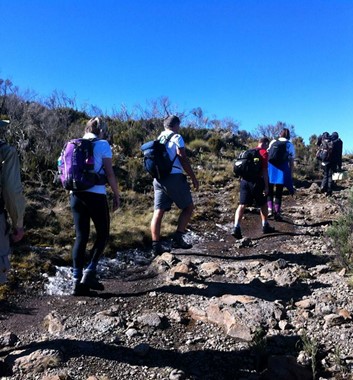 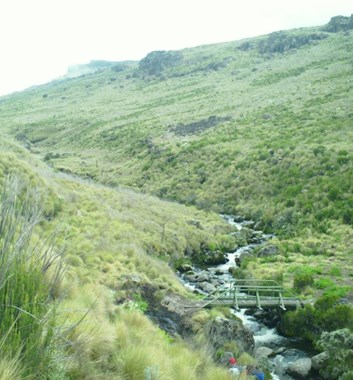 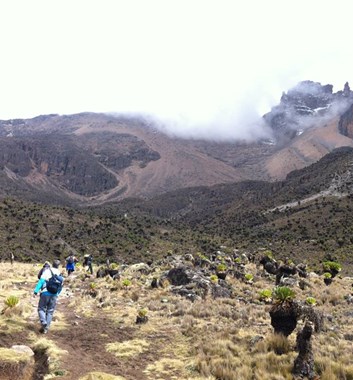 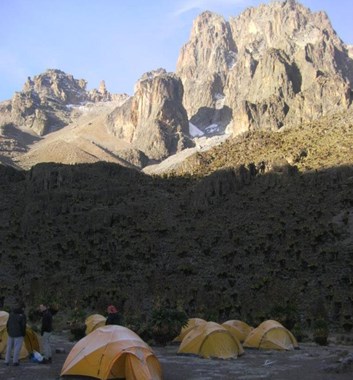 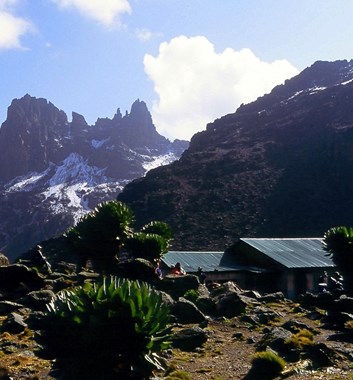 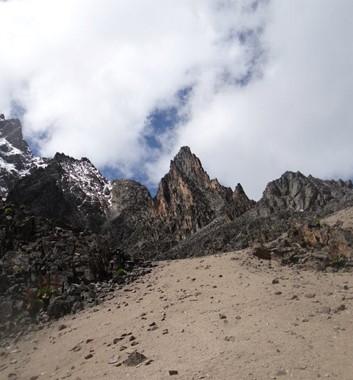 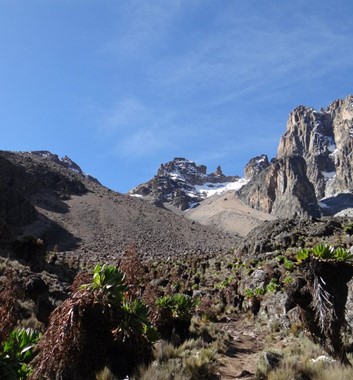 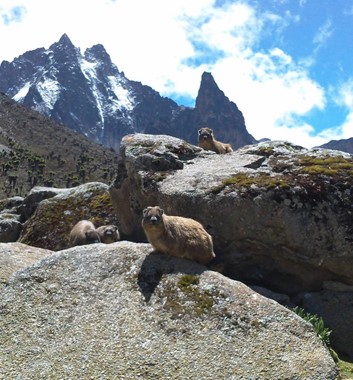 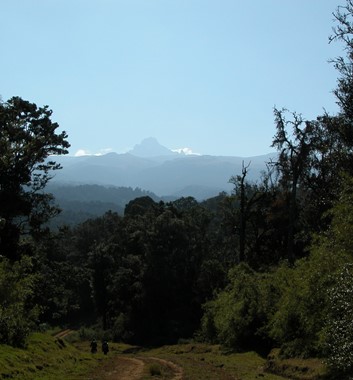 from £2.50 per person
Accommodation in Kenya

On the outskirts of Nairobi you can stay in a secluded safari style camp site with tented rooms. Various upgrades include family rooms, deluxe tents and ensuite. Price is per person based on twin share bed and breakfast.

....the slog up the vertical bog tested many people’s resolve. But again, we all got through. As I slogged up I often as…

We all had a fantastic time and everyone made it to the top thanks to Cyrus!! I think we were completely blessed with th…

A classic adventure on Mount Kenya which is not too long, although the summit day itself is challenging and at relatively high altitude. Expect quite a lot of wildlife and lots of secluded trails with bizarre flora and fauna (including the rock hyrax), and the classic snow covered technical peaks of Batian and Nelion as the perfect back drop. Point Lenana is a walk, no technical climbing on this route, but there are some ropes attached to the rocks to help you on the last few hundred metres.