The Northern Circuit Route is the longest route on Kilimanjaro, a nine day trip initially ascending Lemosho route on the western side of the mountain up onto the Shira Plateau before reaching the Lava Tower, then heading north and circumnavigating the main summit massif in a clockwise direction and joining up with the Rongai route. The summit is then climbed from the eastern side of the mountain and the descent is straight down via the southern Mweka route.

Understandably this is also known as the Grand Traverse or the 360 Route and offers the complete Kilimanjaro experience in terms of all the habitats and the views of the mountain from all sides. The longer journey has excellent acclimatisation and stunning scenery with views across the southern flanks, western forests, the northern plains to the Kenyan border and the arid eastern slopes. The paths are comparatively quiet and less used.

Also the altitude gain each day is less than on other routes, with a gentle gradient until reaching Kikelewa or Third Caves camp, therefore over nine days the likelihood of altitude sickness is significantly less. Yet the overall length of the route is 96 kilometres, not much more than the other routes. An alternate route which summits directly up the northern slopes from School Hut is about 79 kilometres.

Being more expensive, the Northern Circuit is the least visited but in many respects it's the best option for climbing Kilimanjaro without the crowds. 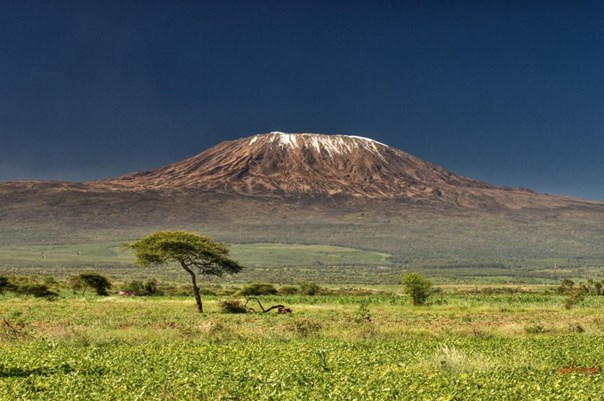 The route in the map above starts at Londorossi Gate and ascends the normal Lemosho Route for the first two days. It then goes round the north side of the mountain via Moir Hut and Buffalo Camp and then joins up with the Rongai Route at Kikilewa Caves to ascend the summit massif and descend down the Marangu route. 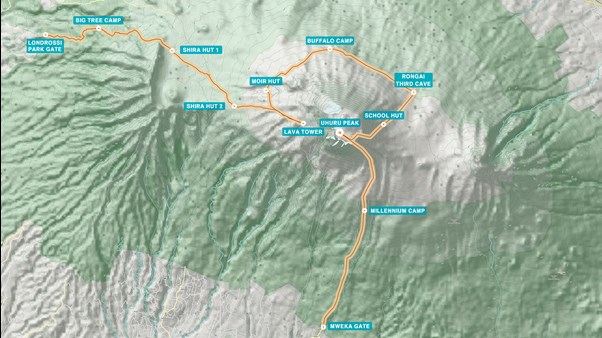 The map above shows a variation of the Northern Circuit route which ascends the summit directly from School Hut instead of joining the Rongai Route. This route involves ascending the northern icefields and is best done with an acclimatisation day. It's possible depending on good weather and ground conditions.

Camps and elevations on the Northern Circuit route of Kilimanjaro

How long is the Northern Circuit Route on Kilimanjaro?

It is a total of 96 kilometres over nine days, hiking from the western side of the mountain and around the northern slopes to the north eastern slopes and descending down the south east side.

Is the Northern Circuit route busy?

No, it's the least crowded of all the routes, mainly because it's a longer trip and therefore costs more. But as an experience of the mountain without any crowds, it's hard to beat.

What clothing do I need for climbing the Northern Circuit route?

Being a nine day trip you will need to bring more base layers and underwear than we mention on our Kilimanjaro packing list. Otherwise, the conditions will be very similar, so make sure you can deal with heat and cold, rain and sun. Being an equatorial high altitude mountain means that you will likely experience a wide range of weather conditions.

Notes on the pricing of this trip

You can read more on these links about our company values and attitudes towards sustainable tourism, and read about our Kilimanjaro staff who have been working for Adventure Alternative for many years now. Gavin Bate has been guiding and running trips to the mountain since 1991 and is one of the most established companies based in Moshi now. Our destination management company Adventure Alternative Tanzania has been run by Castro Kapela for nearly twenty years now.

Day 4: Mti Mkubwa (2780m) to Shira 1 Camp (3500m)
Trek: 8 km, 5-6 hours
We make our way further through the forest then out on to open heathland which is a savannah of tall grasses, heather and volcanic rock. The land in undulates gently and after crossing several streams, we reach the Shira Ridge and descend gently to Shira 1 Camp at 3500m.

Day 5: Shira 1 Camp (3500m) to Shira 2 Camp (3840m)
Trek: 7 km, 3-4 hours
This is a relatively short day from Shira 1 to Shira 2 but an important day in terms of rest and acclimatisation. We’ll explore the vast Shira Plateau as we enjoy the gentle walk across the heathland meadows of wildflowers and Senecio trees whilst looking up at the mass of Kibo seemingly only a stone’s throw away and the clouds which will be below u

Day 6: Shira 2 Camp (3840m) to Lava Tower (4600m) to Moir Hut (4200m)
Trek: 14 km, 6 - 7 hrs
This is an important day in terms of acclimatisation as we continue across the Shira plateau to the Lava Tower, which is a 100m volcanic rock skyscraper of a formation and our high point at 4600m not just for the day but also up until our summit attempt. We then divert from the main trail and drop in altitude to Moir Hut at 4200 which is a seldom used camp at the base of the Lent Hills.

Day 7: Moir Hut (4200m) to Buffalo Camp (4000m)
Trek: 12 km, 5-6 hou
We trek out of camp and the Moir Valley starting with a bit of a steep climb and then we have a detour option to the summit of Little Lent Hill at 4700m, which is great for acclimatisation before returning to the main circuit trail. The path crosses a rock field and undulates up and down before reaching Buffalo Camp at 4000m. The views this day are simply stunning across the plains to the north of Kilimanjaro to the border and Kenya’s famous Amboseli national park.

Day 8: Buffalo Camp (4000m) to Rongai Third Cave (3800m)
Trek: 8 km, 6-7 hours
We leave camp and head up the Buffalo Ridge in the morning and usually have some lunch at Porfu Camp before we start our trek around the northern slopes heading towards the eastern side of the mountain. The terrain becomes increasingly sparse and dry with little shrubs. This route is rarely travelled and feels remote, wild and free as we then reach our camp at what’s known as Rongai’s Third Cave at 3800m.

Day 9: Third Cave (3800m) to School Hut (4800m)
Trek: 6 km, 4-5 hours
We climb steadily up and over the Saddle, which sits between Kilimanjaro’s two peaks of Kibo and Mawenzi through an environment akin to the moon or a high-altitude desert. We then continue to our high camp at School Hut. We then have plenty of time to rest in the afternoon and to prepare for early start and summit day.

Day 10: School Hut (4800m) to Uhuru Peak (5895m) to Millennium Camp (3850m)
Trek up: 6 km, 6-8 hours
Trek down: 10 km, 4-6 hours
Around midnight, we begin our push to the summit. This is a night-time ascent on rock, scree and occasionally snow to the crater rim and beyond to the summit. We wake about 11.30pm and have tea, biscuits and some snacks before starting our trek up to the summit. It’s not a steep climb from beginning to end but undulates and changes throughout. We stop for rests along the way and the pace is slow. The final slope to the crater rim is steep and has loose scree and you can expect cold temperatures and wind chill throughout, however as you approach the crater rim you will start to see the sun rising over the African plains thousands of feet below. The rising sun brings warmth and delivers scenery that will remain with you forever more. The heat and light also brings motivation and encourages you to make the final 45-minute climb up from the crater rim to the summit of Kilimanjaro.

After some time on the summit we then descend to Barafu for a rest and early lunch and then walk down along a gentle path to Millennium Camp, dropping out of altitude, normally arriving mid-afternoon.

Day 11: Millenium Camp (3850m) to Mweka Gate (1640m) to Moshi Hotel (900m)
Trek: 10 km, 4 hours
Descending through the lush forest to Mweka Gate where we sign out of the national park and pick up our summit certificate. This is a walk surrounded by monkeys, lush ancient forests and can be slippy underfoot especially with tired legs! After a rest at the gate we’ll say thank you and farewell to our team of porters before transport back to the Moshi hotel, arriving back mid-afternoon for a hot shower, cold drink and an overnight in the hotel.

Day 12: Today you can either fly home / onward travel, or we can organise for you to experience the wild side of East Africa on a four day, three-night safari to Tarangire, Ngorongoro Crater and Lake Manyara. 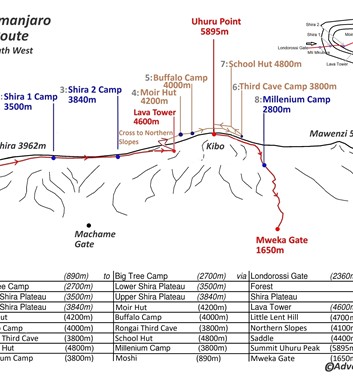 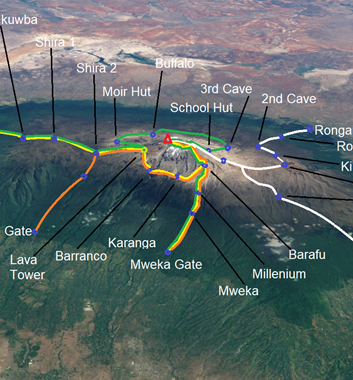 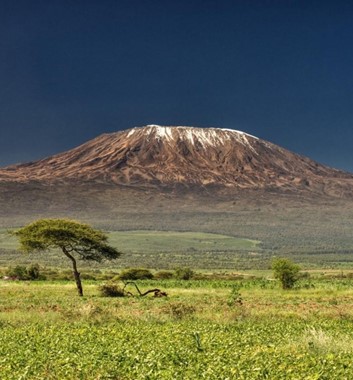 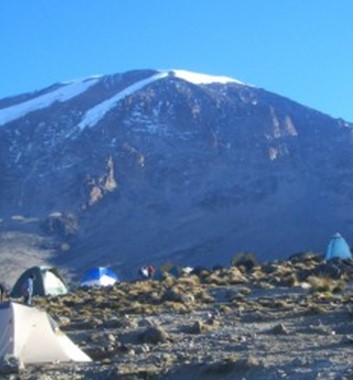 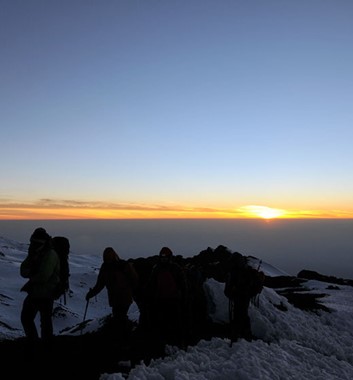 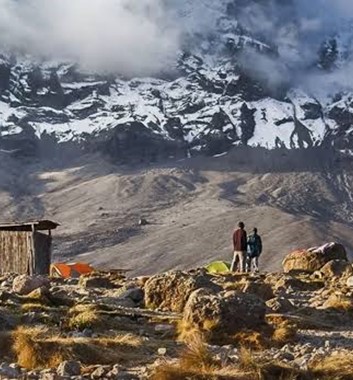 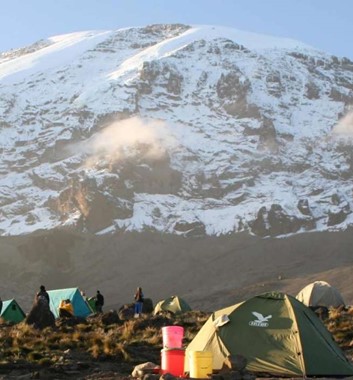 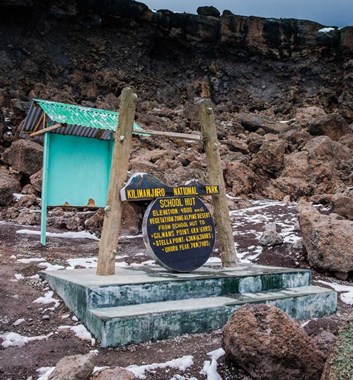 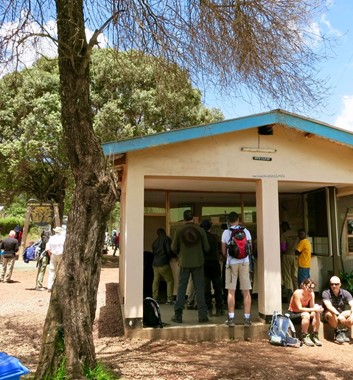 Hooded poncho covers you and your day pack, useful for rain showers.