The region is also known as the ‘Last Forbidden Kingdom’ (organised treks only started visiting the region in 1992, and numbers are restricted with an average of less than 1,000 visiting each year) and it is steeped in undisturbed Tibetan Buddhist culture with ancient monasteries, traditional villages and cave dwellings high up on the cliffs, as well as the stunning architecture on view at the walled city of Lo Manthang (capital of Mustang region).

The Upper Mustang trek in to the remote Trans-Himalayan Region of this semi-independent Tibetan Kingdom offers an adventurous 14 day itinerary with spectacular trekking through striking semi-arid desert with colourful rock formations, deep ravines and snow-capped peaks surrounding you. The history, culture, myth and legend blends perfectly with the stunning scenery.

In common usage, the name Mustang refers to the arid Tibet-like region at the northern end of the Kali Gandaki (known to its inhabitants as Lo). Mustang has a long, rich and complex history that makes it one of the most interesting places in Nepal. The early history of Lo is shrouded in legend, myth and mystery, but there are records of events in Lo as early as the 8th century. It is quite likely that the Tibetan poet Milarepa, who lived from 1040 to 1123, visited Lo. In Lo itself the countryside is similar to the Tibetan plateau with its endless expanses of yellow and grey rolling hills eroded by wind. There is more rain in the lower part of upper Mustang and the hills tend to be great red fluted cliffs of tiny round stones cemented together by mud. Villages are several hours apart and appear in the distance almost as mirages; during the summer season, after the crops are planted, they are green oasis in the desert-like landscape.

Below is a short clip from independent traveller and film maker Yannick Calonge which perfectly captures the essence and beauty of the people and region.

The Hidden Kingdom : MUSTANG (Nepal). from Yannick Calonge on Vimeo.

Days 1 & 2: Arrival into Kathmandu, trek preparation, rest day and sightseeing
Day 3: Fly to Pokhara and spend the afternoon exploring the vibrant town
Day 4: Fly to Jomsom and start trek ascending to Kagbeni
Days 5 to 11: Enter the Upper Mustang region and trek up to Lo Manthang and Namgyal, returning along the trail to Jomson
Day 12 & 13: Fly to Jomson and on day 14 onward to Pokhara, overnight in hotels.
Day 14: Flight back to KathmanduDay 15: Onward travel or start new adventure 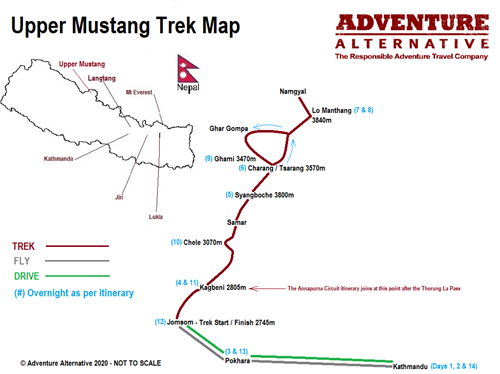 The main itinerary above is approximately 100 kilometres but as mentioned this can also be adapted if you prefer. Each day the trek starts after breakfast at about 8.30am and there are many opportunities to stop, absorb the views, take photos or have a cup of tea along the trail. The pace is slow and the itinerary allows for excellent acclimatisation though the beauty of this trek is that we don't go to any particular height. Most days trekking are for 6 or 7 hours and generally finished by mid afternoon.

The terrain is along well trodden and defined paths which can be sandy and desert like in places and at other times rocky. There is no need for crampons or any technical equipment or skills, it is purely a trek. The Mustang is un-spoilt with a rich Tibetan culture due to it having been closed to the rest of Nepal and elsewhere until the early 1990's, however you will find a warm and friendly welcome. The valley is essentially a large dried up ravine which is also in the Himalayan monsoon shadow, so it is possible to visit for most of the year, however we would suggest you avoid mid winter and consider any time from March through to late November.

People who enjoy hill-walking, trekking, stunning scenery, fascinating cultures and who are moderately fit will love this adventure. 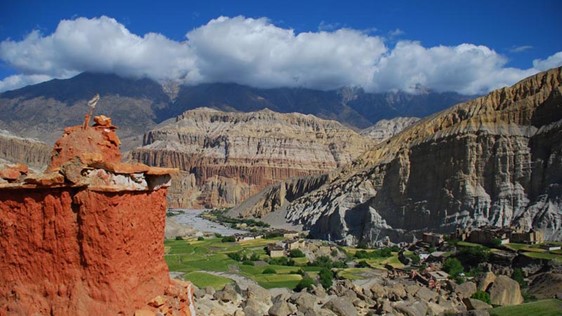 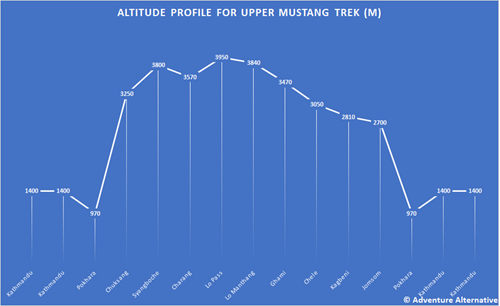 ACCOMMODATION ON THE UPPER MUSTANG TREK

Accommodation throughout our trek is in basic but comfortable lodges which are run by local Mustang families. Each lodge has a central communal area with a large stove that provides heat and a cosy atmosphere. The bedrooms are unheated and generally have two beds with mattresses, pillows and a blanket. You will need to bring a sleeping bag (3 season is fine) and we'd recommend a pillow case.

The lodges generally have showers which are powered by gas and they mostly use sit down flush toilets (some lodges do also have squat toilets). Food on the Upper Mustang trek is very good quality and a mixture of local Nepali / Tibetan and western food. A common, tasty and fulfilling local meal is dal bhat with rice. Along the trail it is at times also possible to source other items and here you'll find a Nepal price guide.

We don't provide hotels in Kathmandu as there is such a huge range available but of course happy to recommend or book hotels if required. We do provide accommodation in Pokhara and Jomsom on a twin room basis.

Check out our gear recommendations and also our Nepal Trekking Kit List page for information about what gear and clothing we recommend.

The basic idea of the clothing you will take is to keep you warm, dry, protected from the sun, able to move comfortably in the mountains and able to be comfortable in the evenings and night. The main points to cover are as follows:-

The Upper Mustang does get cold at night, but not as cold as other regions and by that time you'll be in your lodge. Overnight temperatures outside of winter in Lo Manthang can drop to -8C and day time can reach 25 - 30C, so you need a range of clothing. Late in the afternoon it can be windy and with the desert environment - dusty, so a buff is glasses are a good idea.

Kathmandu has an area called Thamel which is full of hundreds of equipment shops, each one an emporium of new, used, quality and fake equipment all very reasonably priced for rental and buying. You can buy almost anything needed for any trek. The same can be said in Pokhara where any kit or western treats are in abundance.

FREQUENTLY ASKED QUESTIONS (FAQS) FOR TREKKING TO EVEREST BASE CAMP

WHY WAS THE UPPER MUSTANG REGION RESTRICTED?

Upper Mustang was a restricted demilitarised region until 1992, which makes it one of the most preserved areas in the world due to its relative isolation from the outside world. The valley runs south to north from the top of the Annapurna Circuit and reaches to the border with Tibet, hence the majority of the population still speak traditional Tibetan languages.

WHY IS THE UPPER MUSTANG TREK MORE EXPENSIVE THAT OTHER TREKS OF THE SAME LENGTH?

Our price is based in using 4 internal flights, however it is possible to travel by road, which will drop the price, however the main reason the trek is more expensive, than say a 14 day trek to Everest, is due to the permit which is currently $500 per person.

IS A PRIVATE TREK OF THE UPPER MUSTANG POSSIBLE?

Yes! Our team are in Nepal all year round and we run many private or bespoke treks and climbs all over Nepal. The only restriction in place for a private trek of the Upper Mustang is that we must have a minimum of two people.
Read more

Please note that many companies do not include meals on trek nor the internal flights, which makes a large difference to the price.

A deposit of £100 is required to secure your place and we ask that the remaining balance (trip price minus the deposit) is paid in full 6 weeks prior to your departure. When you book with us you're given your own secure online account which you can access 24/7. Through this account you can edit your booking, add flight, health, insurance and dietary details and also make interim payments. We make payments as flexible as possible and you can choose, if you wish, to pay a bit off your trip fee whenever it suits you.

Adventure Alternative Nepal is the local provider for this trip and we can vouch for proper staff salaries, insurances, training and equipment. Our company invests heavily in our local companies and you will have full access to the staff handling your trip by email, phone or skype if you wish.

*These flights ‘fly by sight’ so if there is cloud cover or bad weather there can be delays. If necessary we can be flexible and adapt the itinerary to catch up on lost days, but if the planes can’t fly then there is little that we can do except wait. Occasionally the planes can’t fly but helicopters can, if you prefer this option we can organise it but there would be a supplemental charge. This doesn’t happen very often but you should consider possible impacts on your international flights. The good thing about the Upper Mustang trek is that flights are rarely cancelled and if they are, it's possible to travel by road in the same number of days. 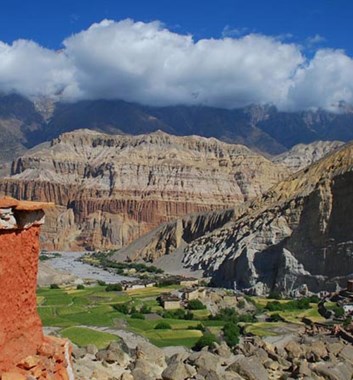 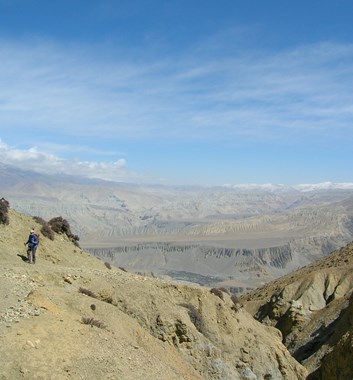 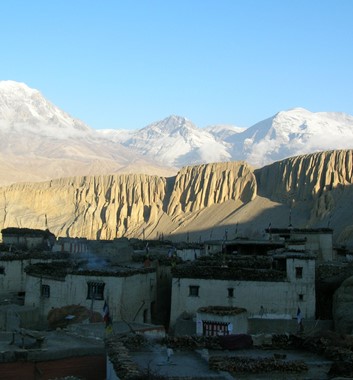 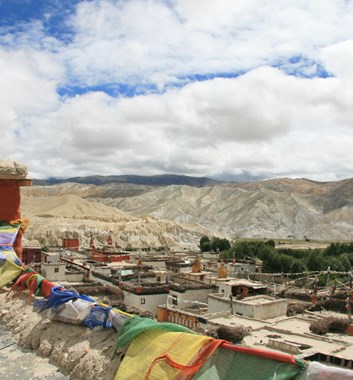 £10.00 per person
Accommodation in Kathmandu

Bed and breakfast in the 3 star Hotel Manang in the heart of Thamel in Kathmandu. Base pice is per person for three nights in a twin or double room.

This luxury hotel in central Kathmandu is a blend of modern day sophistication and cultural heritage with its 100-year-old palace and the newly designed structure of the hotel.

Bed and breakfast in the famous Kathmandu Guest House in Thamel, central Kathmandu. Base pice based on three nights sharing a twin or double.

We are just back from an amazing trip to Upper Mustang .This is our third trek with Adventure Alternative and it didn’t …

The Mustang trek in the remote Himalayan region of this semi-independent Tibetan Kingdom offers an adventurous two week itinerary with spectacular scenery through striking semi-arid desert with colourful rock formations, deep ravines and snow-capped peaks. Still an unusual place to go, even for Nepal enthusiasts, so expect more basic facilities but more than made up for the location and culture.