Mount Elbrus is generally accepted to be the highest mountain in Europe.

Its summit is 18,510 feet (5,642 meters) above sea level and it is located in Russia. This makes it one of the Seven Summits, the highest peak on each of the seven continents. The mountain is covered with snow year-round and normally takes about a week to climb, which is short compared to the other Seven Summits.

However the definition of the seven summits depends on the definition of a continent and where it’s borders lie. For the mountaineering challenge to climb the Seven Summits there are two areas of dispute! One is whether the highest in Europe is Mount Elbrus or Mont Blanc according to the European continental plate; the second is whether Australia counts as a continent or whether all of  Oceania should be used, in which case Puncak Jaya (Carstenz Pyramid) beats Mount Kosciusko.

The argument over Elbrus is a geological one because the boundary between Asia and Europe could either be defined by the Kuma-Manych Depression or by the Greater Caucasus watershed. If it is the former then Elbrus and the whole Caucausus range lie inside Asia. However the latter is generally agreed to be correct and therefore Mount Elbrus is the highest on the European continent.

Actually Elbrus isn’t technically a mountain, it’s an inactive volcano which is a just a few kilometres separate to the main Caucasus range.

It’s prominence – which is the elevation between the peak and the lowest contour that completely encircles – is interesting too. Prominence is a measure of how distinct a mountain is from nearby peaks, so a peak with a high prominence tend to be the highest points around and they generally have amazing views. Mount Elbrus’ prominence is 15,554 feet (4741 metres) so it really stands out and it’s true, the views from the top are amazing! It’s actually the 10th most prominent mountain in the world.

Who lives near Mount Elbrus?

It’s position is right on the border with Georgia and in a small republic called Kabardino- Balkaria. The Kabardanians live in the lowlands and are generally Christian, the Balkarians live in the mountains and are generally Muslim. They live peacefully and the few small villages which are at the base of the mountain on the south side – Terskol, Cheget and Azau – become thriving ski resorts in the winter. Some of the best heli-skiing in the world can be found in this area!

The local people are quite traditional and conservative in nature, they make a living from the mountain and they enjoy food and wine and dancing. The local gastronomic is lamb shashlyk, which are large skewers of lamb cooked over an apple wood fire.

The name and the mythology of the highest mountain in Europe

Originally the Turkic people known as the Balkars who lived in the Caucasus called Mount Elbrus ‘Mingi Tau’ which means ‘resembling a thousand mountains’. It’s certainly a large mountain with over fifty glaciers extending from its two summits.

In ancient mythology the mountain plays a significant and painful role for Prometheus who was chained to it by Zeus as a punishment for stealing fire from the gods and giving it to mankind. Every day the eagles would peck out his heart but in the morning he would be restored, only to suffer the same again.

The Climate on Elbrus

The weather is most stable during July and August but you can climb from early June to early September if you have the right equipment. Cold and wind are continual problems on Mount Elbrus, even in the height of the summer. Above the snow line temperatures can be minus 30 C and the wind can be very strong. A lot of problems are caused by storms rising during the day and groups caught out in bad visibility.

Because the mountain is situated between the Black Sea and the Caspian Sea, the effect of these two large bodies of water has a significant impact on weather, as does a particularly cold notherly which blows down from Siberia. 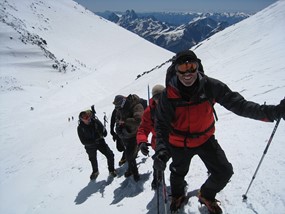 On the south side of the mountain there is a cable car system which was built from 1959 to 9176 and which reaches 12,500 feet (3658 metres). You can walk if you want to but the cable car takes you to the snowline in summer above which there are many huts for sleeping. The two most famous are the Barrels Huts at 3962 metres which are made from converted oil tankers and the Priut-11 hut at 4160 metres which was burnt down in a fire in 1998. In 2010 a rescue hut was built at 5500 metres in the col between the two summits.

A snow machine or ‘ratrack’ can carry climbers further up the mountain to about 4600 metres thereby reducing summit day considerably. The Normal Route on Mount Elbrus is quite challenging due to a combination of snow and ice, high winds and low visibility and of course the high altitude.