There are two main routes to climb Mount Elbrus, on the north side or the south side. It is possible to climb the mountain from the east, but access makes this a harder and longer proposition. While the mountain is broadly speaking a symmetrical volcano with much the same gradient and objective dangers on each side, there are some significant differences between the two.

The North route is a different type of expedition to the South route and should only be considered by those who have tested their abilities at altitude and in cold climates. It is important to be realistic about your fitness and experience as a decision made from the comfort of your home could be questioned in a whiteout at 5000m:

A typical low visibility situation on Elbrus which on the north side is more committing because there are none of the facilities that exist on the south side.

Support:  The South route is well supported with cable cars which take your kit up for you, and snow machines which speed your ascent on summit morning.This benefit is clearly the over-riding advantage of climbing the south route. Mountain rescue teams work on the south side too, and guides have access to snow mobiles and ratracks in case of emergencies. On the north side all climbing teams are virtually self-reliant and would have to manage any situation themselves.

The North route doesn’t have any cable cars or any of the infrastructure found on the south side. All kit must be carried up to the high hut and camp, however we there are porters to hire.

Terrain and route: Elbrus is more or less a symmetrical volcano with rounded summits and generally easy angled slopes, and both routes are on permanent snow and often ice. Most of both routes are straight forward but there are some small crevasses and occasional areas of exposed icy ground.

The big difference on the north route is that climbers must enter the saddle between the two peaks and travel through a snow choked passage to join the south route and ascend to the summit plateau. Breaking trail through soft snow at high altitude is hard work. The other option is to make a direct route from the saddle to the plateau which would require moving on a man rope safely on steeper mixed ground.

Temperature: Ambient air temperatures are fairly similar on both routes but the north side can be colder and more exposed in a northerly wind when the windchill can easily drop to minus 20C. The lack of facilities on the north side mean that climbers must walk all the way up and down - a total elevation of over 1000m in 12 hours or so - which means being strong enough to maintain body heat the whole way.

The south side is easier because most people opt to take a snow machine up to 5000m (Pastukhov Rocks) at the start, and have the option of getting motorised assistance on the descent, which is useful if people are close to exhaustion or hypothermic.

Accommodation: On the south side accommodation is in huts on the mountain; although they vary in standard, they are solid shelters to cook, eat and sleep in. The first part of the trip in the valley is in a hotel which allows you to acclimatise and eat and sleep in comfort.

On the north side, base camp is a campsite and climbers stay in tents with a communal tent for dining. The high hut is on the moraine at about 3800m and is quite basic but at least the climber is still under shelter. Above the hut climbers must camp at Lenz Rocks - at around 4600m - which is obviously windy and requires everyone to cook for themselves and sleep comfortably the night before a big summit day.

Therefore, having that experience of camping at high altitude is important, as is the ability to assist the guides with putting up tents and doing carries. Climbers must also work self-sufficiently inside the tent making dinner, boiling up water and preparing drinks and snacks for summit day.

Elevation profile: The altitude profiles for each route are below and as you can see they are quite similar and gradual in terms of acclimatisation. 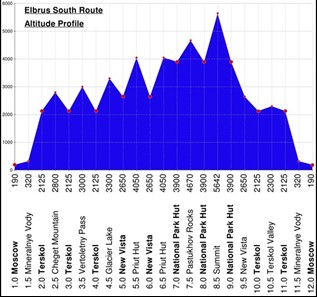 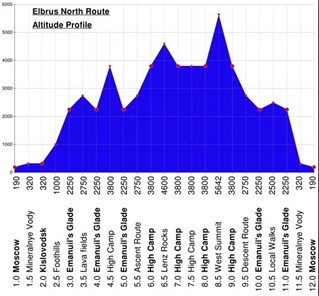 In summary the North route on Elbrus is tougher than the South route but both are very rewarding and challenging climbs but people who are considering the North route must be confident with their fitness, experience and abilities. You should also be prepared to be more self-sufficient and self-reliant. Read more about Elbrus safety here.

If you have climbed Kilimanjaro then the south side is a good challenge and progression. If you have Scottish Winter or alpine experience,  with some expeditions at altitude on your CV, and if your ambitions further down the line are for higher mountains like Aconcagua for example then the Northside is an option.

The other option is the Mt Elbrus Traverse. Climb up the North Route to the summit and descend by the South Route, which is actually an easier option from a climbing point of view but requires additional logistics in moving equipment off the mountain and from the base camp to the airport. 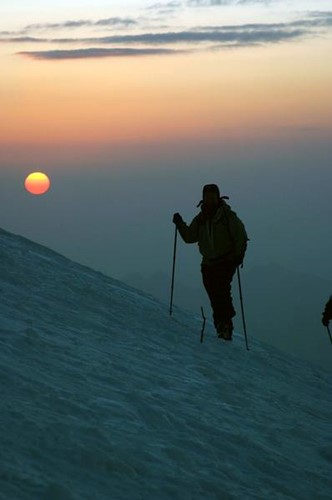 Early morning on Elbrus, a wonderful experience on an iconic mountain. This picture could be either the north or south side quite easily, they're very similar in terms of terrain and acclimatization profile. The big difference is that if this was on the south side you would have the knowledge of support, but if this was the north side then the team would be entirely on their own.