Years ago when I was guiding clients with my Russian friend Sasha Lebedev to climb Mount Elbrus during the ‘perestroika’ period after the breakdown of the Soviet Union the journey to the highest peak in Europe was quite an adventure.

Even the drive to the Baksan Valley in a Russian jalopy fuelled by LPG that was stored in a tank on the back seat was a leap of faith as we emerged from the old rattling Aeroflot aeroplane (smoking and pets allowed) at Mineralnye Vody airport near the Caucasus Mountains.

From the village in the valley with its massive grim Soviet hotels and breakfast ‘buffet’ of grechka (boiled buckwheat groats with salt), we first had to brave a cable car system built in the 1960s and supported on huge crumbling concrete pillars.

The first stop was called ‘Mir’ after the illustrious Russian space programme, but there was nothing salubrious about the accommodation. We slept on the concrete floor in the windowless ‘station’ listening to the wind howling through the rusting metal cables. Later on a hut called ‘Old Vista’ was built here but this has now closed due to ‘ownership issues’. 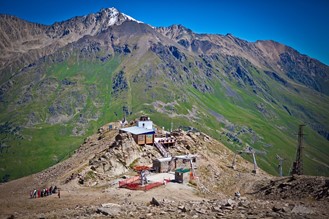 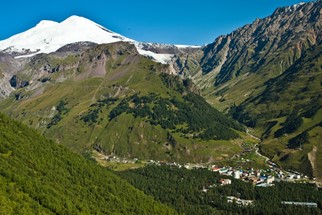 Then you had the choice of taking a chair lift to 3750 metres that often stopped for disconcertingly long periods of time, leaving you dangling in the cold gazing out at the Caucasus Mountains. The seats were plastic chairs screwed to a metal bar so you were completely alone, although you could shout across to the person behind or ahead to pass messages. It was vital to take your down jacket on this chair lift journey or better still, walk.

Mount Elbrus gradually opened up to foreign climbers after perestroika and because of its popularity as one of the Seven Summits, the number of facilities slowly increased. My company has been guiding teams to the mountain every year since 2000 and we have seen an enormous change compared to those gritty early days.

A second cable car facility has been built parallel to the old one, although the chair lifts still remain (and still stop without warning). There is a new comfortable hut and restaurant at the Mir Station, which is now called New Vista. However this is currently closed, still due to ‘ownership issues’.

The infamous Barrels huts are still there but they would still struggle to pass a health and safety examination. The old electric fire has been replaced, but the mice are a permanent feature. 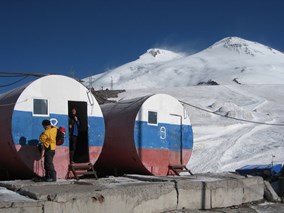 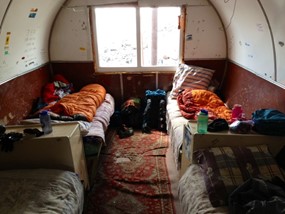 The Barrels were a famous feature of Mount Elbrus, and staying there was always an experience. Climbers from all over the world shared the cramped interior, the atmosphere was always convivial but the electrics was always a big concern!

Nowadays Adventure Alternative use the new National Park huts for its main high camp on the south side of the mountain and makes several forays up higher on the mountain to as far as Pastukhov Rocks at 4650 metres for acclimatisation. These rocks are named after the famous Russian army cartographer who tried many times in the 19th century to summit the mountain without any success. He was forced to camp at these rocks during one of those attempts.

We still use the cable cars and snow cats for taking luggage all the way to the huts, while team members are welcome to walk or take the cable car as well.

Down in the valley we use the Nakra Hotel (below left) in the village of Cheget (below right) for our base. The owner is a local Balkarian and ex-Soviet ski champion. Like most of the locals, he has made a living from the mountain, but he has to work within a local business environment that has constant competition from financial speculators from Moscow. 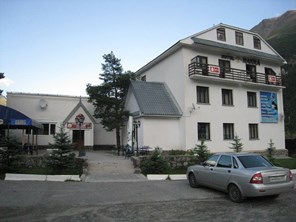 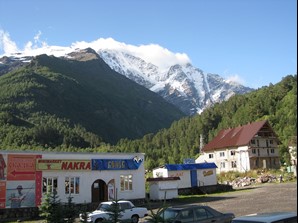 Huts on the South route of Elbrus 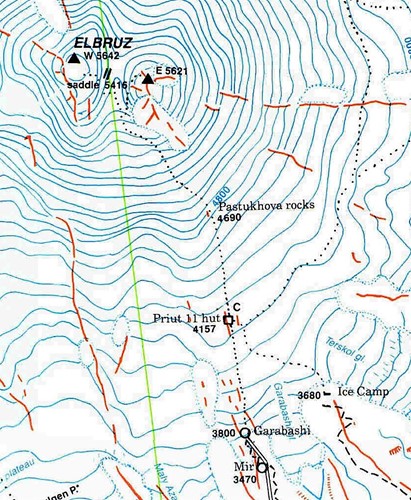 Old map showing the position of the Mir Station (top of the cable car) and the Garabashi barrels at 3800m and the Priut-11 Hut at 4157m. The new National  Park huts are just above the Barrels.

The chair lift finished at 3750 metres at a place called Garabashi where the notorious ‘Barrels’ were situated. These converted oil tankers had been insulated and lined with plywood and fitted with iron bedsteads from the local mental asylum which had been situated high up in the valleys to keep the inmates at a distance. An ancient electric fire was a constant fire hazard, mice ran freely on the floor, and sometimes there would be twenty people crammed inside, all smoking. There were no washing facilities, but a brisk ‘snow bath’ was favoured by Russians which involved standing outside in your underpants and rubbing yourself all over with handfuls of ice. Dinner was dried fish, black bread and local vodka. 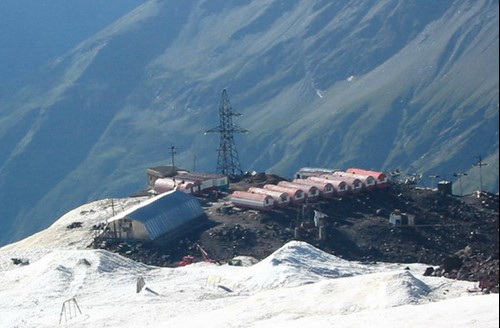 Garabashi Huts on Elbrus made of converted oil tankers were also known as the Barrels.

Just above the Barrels at 3900 metres are the new ‘National Park’ huts, a collection of seven buildings which are clean and professionally run. They have become the default accommodation for groups climbing the mountain now but they have nothing to do with the National Park, which doesn’t officially exist anyway. They are just called that because the man who started it used to work for the ‘National Park’ collecting fees from visitors. Beds are on two floors and there are 3 kitchens and eating areas. Usually electricity is turned off for 2 hours in the evening. From 2017 they even have wi-fi. 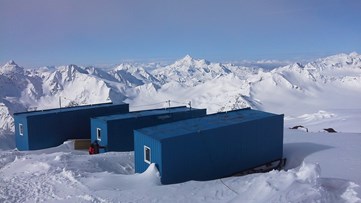 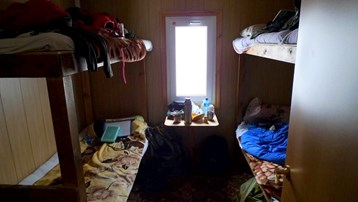 At 4100 metres there was the famous Priut-11 hut completed in 1939 which had a remarkable history during the golden era of Soviet mountaineering. Named after a group of 11 scientists who had used the site as their base in the 1920s, it was built as a futuristic hotel that gleamed with a metal clad exterior and was three stories high. It could accommodate 120 people, was entirely weatherproof and even had electricity. In those days hundreds of soldiers would be marched to the summit in honour of Mother Russia and as part of physical training.

It eventually suffered a catastrophic fire in 1998 caused by a cooking stove that got out of hand; the cladding was weatherproof but not fireproof and there were stories of people leaping from the building onto the freezing ice below. 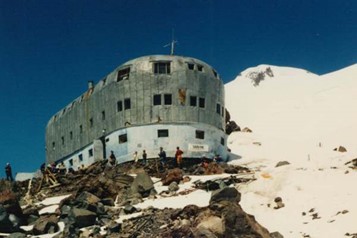 Diesel Hut on Elbrus at 4100 metres

A new smaller hut called the Diesel Hut was built nearby in 2002, named for the fact that it had a diesel generator, and it became the default ‘high camp’ for climbers. Built of stone with an aluminium roof it was absolutely freezing downstairs, but if the sun was out the communal upstairs sleeping area was like a sauna and we regularly played cards there in our pants. 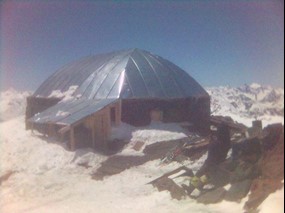 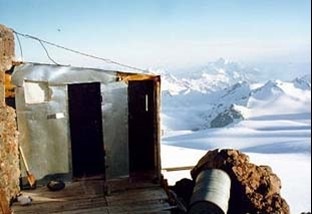 This mountain hut had the dubious honour of hosting the world’s worst toilet (above right). An exterior plank of wood with a hole in it overlooked a giant 40 foot stalagmite of accumulated frozen human faeces. It was important to check wind velocity when visiting, as whatever you put down the hole would often be blown back up at twice the speed.

On the other side of the large snow slope where the Diesel Hut was situated, another set of four huts called Muzafar Huts were built,  named after the old man Muzafar who runs them. These are quite old and not in great shape now, cold and draughty with no central eating area. 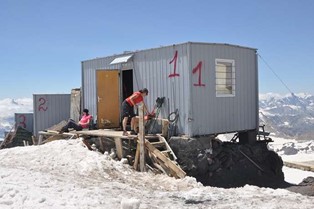 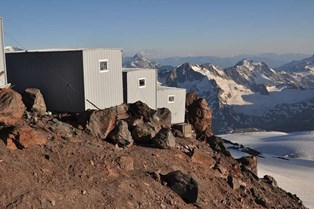 A further small hut was built in 1930 at 5350m metres between the two summits at what is known as ‘The Saddle’. A tragic event occurred in 1936 when a large group of climbers attempted to climb Elbrus in the winter; one person slipped on the hard exposed ice and knocked the other climbers off like skittles as he careered down the slope. Many people died on the ensuing fall five hundred metres down to Pastukhov Rocks. This hut doesn't exist any more, except for some bits of broken wood.

More recently an emergency shelter was built in the Saddle to help climbers who became stranded or lost. The hut can accommodate about six people standing and has two bunks, but there is nothing inside. 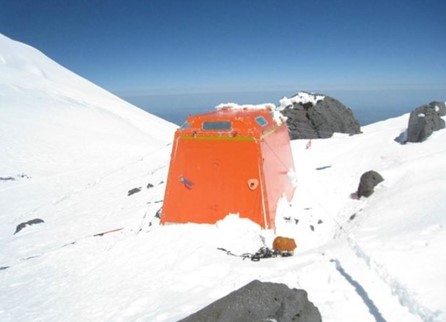 Huts on the North side of Elbrus

There is only one hut on the north side of the mountain, at the edge of the moraine and permanent snowline at 3800 metres. Climbers must carry their own equipment from the campsite at the base up to the hut and then normally up to the high camp at Lenz Rocks before summitting.

The base camp is just a collection of tents in a field by the stream and it is reached by using a Russian minibus which takes about four hours, two of which are off-road and the last part requires the driver to cross a small river. 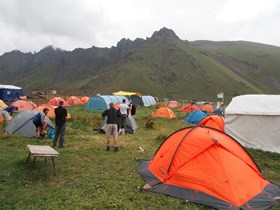 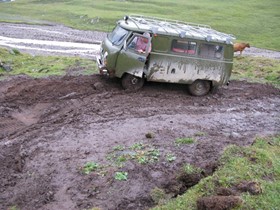 A small collection of metal huts make up the site, comprising a cooking and eating shed, and several circular metal huts with nothing inside which are used for sleeping. 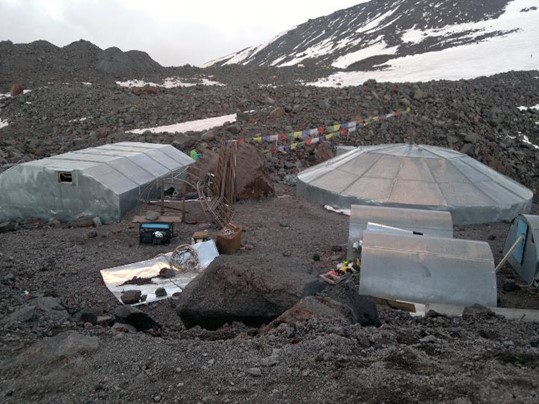 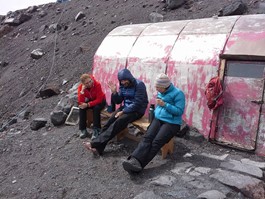 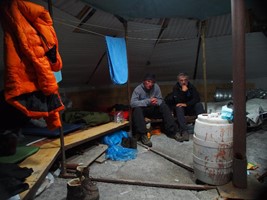 The metal huts for accommodation are very basic inside, there is room to hang some gear and sleep on the floor but you will need sleeping mats. There are no facilities but there's an outside toilet.

Above the top hut is one final camp - for optional use depending on weather - which is a campsite on the ice next to some rocks called Lenz Rocks. The altitude is 4600m and it does reduce the summit day time by about four hours in total, but the downside is carrying the gear to this altitude, putting up the tents and trying to get a good nights sleep before a big summit day. 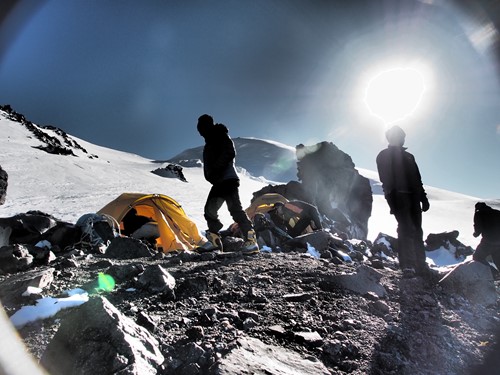 Read more about Preparing for Elbrus, and Safety on Elbrus if you are planning to climb the mountain with us, and don't forget to call for any advice.