Morocco has a history as an independent nation state stretching back to the 9th century, interrupted only by the brief interlude of the Protectorate (1912-1956) when the country was divided into French and Spanish zones. Morocco, unlike her North African neighbours, was never part of the Turkish Empire.

To the south, Morocco claims and has occupied the territory of the Western (formally Spanish) Sahara. This claim forms a major rallying point in domestic politics. Morocco's political system is evolving from a strongly centralised monarchy to a parliamentary system. The King retains much of the executive power, but the Parliament and most of the government are democratically elected. 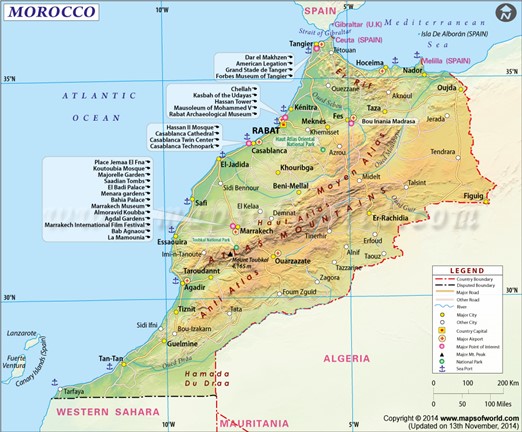 Morocco has a coast on the Atlantic Ocean that reaches past the Strait of Gibraltar into the Mediterranean Sea. It is bordered by Spanish territory to the north, Algeria to the east, and Western Sahara to the south. Since Morocco controls most of Western Sahara, its de facto southern boundary is with Mauritania. Morocco's capital city is Rabat; its largest city is its main port, Casablanca. Other cities include Agadir, Essaouira, Fes, Marrakech, Meknes, Mohammadia, Oujda, Ouarzazat, Safi, Salé, Tangier and Tétouan. The geography of Morocco spans from the Atlantic Ocean, to mountainous areas, to the Sahara Desert.

A large part of Morocco is mountainous, the Atlas Mountains are located mainly in the central and southern regions of the country. The mountain areas are mainly inhabited by the Berber people and you'll have the pleasure of getting to know them on our Mount Toubkal climbs and Moroccan treks. The Berber people have their own language although the official language of Morocco is Arabic but due to historical influences French and Spanish are also widely spoken.

The climate in Morocco is such that it does not exclude travel at any time of the year, although some will find the mid-summer temperatures uncomfortable for trekking. Daytime temperatures in Marrakech vary from around 18degC in December-January to 36degC in July. In the Atlas, the temperatures will generally be a few degrees cooler though it may feel even colder with the effects of wind-chill. On a cold day in the winter high in the Atlas the temperature is well below freezing with abundant snow cover.

Along the coast, the weather takes on a more Mediterranean feel, dry and mild. However, if you head south the climate exudes a desert atmosphere with vast temperature swings from day to night. Daytime is very hot and dry, while the temperatures can be below freezing at night.

As with travel to all locations in the world it is important to respect the social and cultural norms of Morocco. This will ensure that you are welcomed and get the best possible reaction from our hosts. However, you do not need to worry about causing offence by failing to observe subtle details of Moroccan culture. The main thing is that you behave respectfully and in a friendly way. If at any point you are unsure of what might be expected of you, just look around at what others are doing or simply ask.

Morocco is mainly Muslim in its religious observation and as such many of its customs stem from Islamic beliefs. You will certainly notice the 'call to prayer' in Marrakech and up in the mountains at Imlil. The Moroccan staff will also disappear at various points during the day to pray.

Try to conduct yourself in a calm and reasonably quiet manner, observe the local Moroccans around you and try not to be significantly louder or more boisterous than them. Public displays of affection between a male and a female, such as kissing, is not considered appropriate and should be avoided. You may notice Moroccan men walking or standing holding hands, this is normal between good friends and does not indicate anything beyond platonic friendship.

Some Muslims may consider the left hand to be unclean. You should always therefore shake hands, eat or offer and receive with the right hand. Feet and shoes are often considered ritually unclean, avoid sitting with them up in the air or stepping over someone sitting on the ground. Also, ensure that where you sit does not force others to step over you. When entering a home or guest house always assume that you should remove your shoes. In some cases the host may say that you don't need to but it would still be appropriate to do so.

One thing that sometimes takes a bit of getting used to is the local Moroccan interpretation of time. In common with many places in Africa, it is not considered unusual for things to run on a fairly relaxed schedule. For example, it is not unusual for a breakfast set for 8am to arrive at 8:30am or even later. In the UK and a lot of other western countries it is considered rude or unprofessional to be anything more than a few minutes late, lateness does not imply this connotation in Morocco. Therefore, it is necessary to be patient and try not to be offended if timings start to slip a bit.

How to Greet People in Morocco

The usual verbal greeting would be "Salam oo-alley koom" or just "Salam" and in most cases a handshake. The normal reply would be "Oo-alley koom salam". Sometimes people will touch their ear or kiss their hand directly after shaking your hand, as a mark of particular respect or affection. A lot of Moroccans, especially those who regularly deal with tourists will simple say "hello", "bonjour" etc based on their assessment of where they think you are from! When meeting a female Moroccan they may offer their hand for you to shake, if not then a slow bowing of the head will be appropriate. Moroccans who are good friends are likely to kiss each cheek and may have a more lingering handshake, they may also stand with a hand on each others shoulder or hold hands.

Dress 'modestly', this is especially true of female visitors. For general guidance you should keep your upper arms to the elbow and upper legs to the knee covered. In addition, tops should not finish above the waistline of your trousers and expose your mid-riff and your neckline should not extend down more than a few inches. In some situations it will be appropriate for women to cover their head and hair with a scarf. You should look around to see if others are doing so or ask one of the Moroccan's accompanying you.

The interaction with Moroccan women can vary greatly. In Marrakech you may see young Moroccan women in very western outfits with uncovered hair and riding mopeds. You may also visit businesses such as a riad where a woman may be the main manager and interact freely with you. However, in general you will probably observe that many women dress and behave very conservatively and reserved and may just be 'hovering in the background'. In this case, it is appropriate to acknowledge them but they may become uncomfortable if you attempt to engage them in too direct or open a manner.

Food and Drink of Morocco

It is common for food to be eaten with your hand from a communal tagine or dish. You may therefore be offered a bowl to wash your hands in before eating. In this situation you just hold your hands over the bowl and the host will pour water over them to allow you to wash. There is a technique to mashing and scooping up the food with a small piece of bread, just copy the locals or ask them to teach you, it can be good fun.

Tipping in Morocco is expected in hotels. 10-20 Dirhams should suffice for bags and cleaning services. At restaurants tip 5-10% of the bill if a surcharge has not already been added. For taxis, round up your fare. Tipping guides and porters is not mandatory, but it certainly is appreciated. For more information on tipping refer to our tipping guide.

At Adventure Alternative we promote sustainable tourism. This means that we advise against using disposable plastic water bottles. Treat water with a bag filter, iodine, or a SteriPen instead. Also, avoid using plastic bags by bringing your own cloth bag for shopping. Limit the use of toilet paper by using a Shewee or a pee rag for number 1 bathroom trips in rural areas. Don’t litter, and always dispose of your waste in proper containers.

Morocco is a predominantly Muslim nation. So all Muslim holidays are observed. However, do take note that the Islamic calendar is different than the western calendar. For up to date information, research when Islamic holidays fall on the calendar year you are traveling.

Other notable holidays and festivals include:

Marathon des Sables: Every year in April competitors from around the world partake in a 6-day race through the Moroccan Desert.

The Rose Festival: In May they celebrate the rose harvest in Kalaat M'Gouna.

The Fes Festival of World Sacred Music: Held in June, this festival celebrates spiritual dances and songs. With whirling dervishes, chanters, and mystics this festival provides a unique look into the culture and customs of Morocco.

Essauira Gnawa and World Music Festival: This festival is held in Essaouira during the month of June and celebrates the music and acrobatics of the Gnawa.

Imichil Marriage Festival: This is a Berber marriage festival in August where up to 40 couples get married in the High Atlas Mountains.

The following advice is intended to provide a brief outline of any laws in the destination country that are directly applicable to travelling there. This is not intended to be exhaustive or complete and laws do change from time to time so we strongly advise visiting the UK Foreign Office website and checking for their current advice.

In general the laws of any country will be based on the same values as at home but significant differences can be present subject to the prevailing cultural, religious and political environment in the country. These four basic factors can be your main guide to how to act in unfamiliar situations. If you are any doubt as to what to do in a given situation it is usually possible to identify the "safest" fall back option and go with it. For example, not buying something, not taking a photo of a government building etc.

This information should also be read in conjunction with our relevant page on Practical Information for Morocco.

Local laws reflect the fact that Morocco is an Islamic country. You should respect local traditions, customs, laws and religions at all times and be aware of your actions to ensure that they do not offend other cultures or religious beliefs, especially during the holy month of Ramadan or if you intend to visit religious areas. Women, especially when travelling alone, will attract attention. To minimise hassle, you should dress inconspicuously and avoid wearing clothes that could be regarded as provocative (e.g. short skirts and low-necked strappy tops), except on the beach. It is against the law to carry bibles in Arabic, to attempt to distribute any non-Muslim / evangelical literature or be involved in any such activity is illegal.

Homosexuality is a criminal offence in Morocco. Sexual relations outside marriage are also punishable by law. British nationals travelling to Morocco with a view to marrying a Moroccan should, before they travel, check what documentation they will need to provide. Advice can be found on the British Embassy’s website.

The penalties for possession of even small amounts of drugs are severe; up to 10 years’ imprisonment, with no remission for good behaviour, heavy fines and confiscation of your vehicle. If you travel through the Rif Mountains, a major cannabis growing area, you may be harassed by drug dealers.

You should bring sufficient funds for the visit in cash or credit cards. There is no limit on the amount you can import.

Here are some handy resources for your trip to Morocco.