Embarking on a guided climb in the Himalaya mountains provides opportunities for all abilities, from the seasoned trekker to the extreme mountaineer. Have a look at our range of Himalayan peaks to climb and enjoy, which are all professionally guided and organised. With such a varied feast of Himalayan mountains to climb, we have chosen a few of the favourites as guided trips which will enable you to experience the joy of climbing in this part of the world.

Mount Everest is in the high Khumbu right on the border with Tibet and we offer expeditions for small groups of experienced climbers to ascend the South East ridge. We also can provide logistics for private expeditions. Climbing the Himalayas with a climbing expedition is the challenge of a lifetime.

In the 6000m range of so-called 'trekking peaks' (this is an administrative allocation based on royalty fees, and has no association with the technicality of the climb) we offer such iconic mountains as Island Peak (also known as Imja Tse), which was a training peak used by Hillary and Tenzing in 1953, Mera Peak in the Barun Conservation area, Yala Peak at the top end of the Langtang Valley, and Parcharmo Peak in the Rolwaling district. Some expeditions cover multiple peaks and passes that include more technical crossings over the Amphu Lapcha Pass and the easier Kongma La.

This 6189m classic peak with an airy summit ridge and great mixed climbing is a big mountaineering challenge but does have fixed line assistance.

Mera is the highest of the 'trekking peaks' in Nepal, a challenging but not very technical ascent over 21 days.

Two week trek through Langtang valley with an ascent of the spectacular but non-technical Yala Peak.

Guided expedition to climb Pokalde, Chukkung Ri and Island Peak in the Khumbu region of Nepal.

Climbing and Mountaineering Expeditions in Nepal

The most popular region to climb peaks is in the Khumbu Region. This area includes the famous Sagarmatha National Park. Here you will find Island Peak, Pokalde, Kongma Tse, and Everest herself. This region is home to four 8,000m peaks. From here you reach Cho Oyu, Makalu, Lhotse, as well as Everest. One of the most iconic mountains in the region is Ama Dablam. At 6,812m high it certainly makes a mark on the skyline. It’s unique knobby summit makes it easy to spot while trekking or climbing.

Many people train for several years to tackle the tallest mountain in the world. By the end of the 2017 season 4,469 different people have summited Mt Everest, the appeal of standing on the highest point on earth is a life-long accomplishment for many mountaineers. However, it is the opposite of a walk in the park. In order to climb this mountain, you need plenty of experience under your belt. 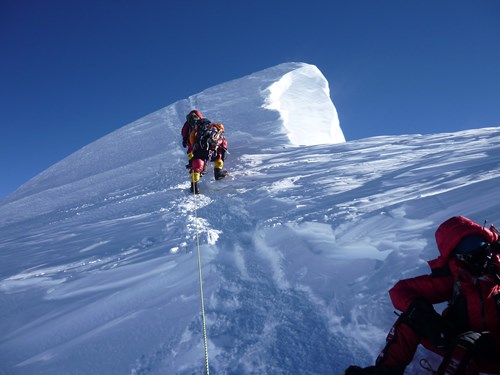 Roping up for the final ascent up the summit ridge cornice on Mount Everest.

Guided Beginner Peaks in the Himalayas

However, if an 8,000m peak is a bit much for you, this region is a playground for those looking to get their feet wet with high-altitude mountaineering. Island Peak is a classic peak for those looking to summit a Himalayan beauty. Climb along a knife edge ridge line while taking in all of the gravity-defying peaks around you. Island Peak has the added benefit of following the Everest Base Camp Trail for the approach. This route seems like a walking highway compared to many of the trekking and climbing routes in the region. Yet, at the same time there is something magical about walking in the footsteps of famous mountaineers and Sherpas.

Another great option for beginners is to climb Mera Peak. Although not located in the Khumbu Region, it is just to the east in Makalu Barun National Park and offers many stunning views of the great Himalayan mountains. Furthermore, Mera Peak is the highest of Nepal’s “trekking peaks.” Climbing Mera Peak also means that you will be in a more remote area than Island Peak. The hustle and bustle of the Everest Base Camp route quickly fades away as soon as you leave Lukla. 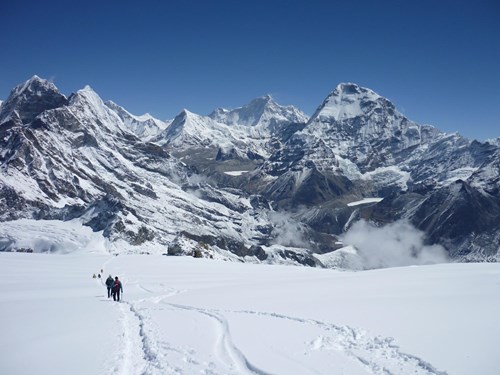 A splendid day on the descent of Mera Peak with a fantastically clear view of the surrounding mountains.

There are several other areas prime for mountain climbing aside from the Khumbu. One area is the famous Langtang region. Lying just north of Kathmandu, the peaks in this region are bit more accessible than those in the Khumbu. Don’t be fooled by its proximity to the country’s capital. This region is well-known for its fantastic wildlife. Home to the Himalayan black bear, Tahr, monkeys and the rare red panda. There have even been reports of Yeti sightings.

Langtang is home to Yala Peak, an easier trekking peak in the Himalaya. Yala Peak boasts fantastic views of Shishapangma, Dorje Lakpa, Ganchenpo, and many more. It can be climbed in two days, albeit is still a strenuous climb. However, it’s a great way to stand on the top of a Himalayan mountain while being a non-technical peak.

Guided Treks to the Annapurna Region

The Annapurna sub-range, or Annapurna region as it’s known by travelers, also offers excellent mountain climbing. Annapurna is the 10th highest mountain in the world. At 8,091m it just barely climbs into the death zone. But don’t be fooled, out of all of the 8,000m peaks, Annapurna battles it out as being one of the toughest climbs in the world.

Manaslu hangs out about 40 miles from Annapurna. This beauty is another 8,000m peak and the 8th tallest mountain in the world. Meaning “mountain of the spirit” this mighty giant has a striking massif with seemingly two peaks if viewed from the right angle. In 1974 the first female team to summit an 8,000m peak reached the top of Manaslu which marked an historic event for female mountaineers. Since the first person to summit the mountain was Japanese, there is a great pride between the Japanese people and Manaslu. 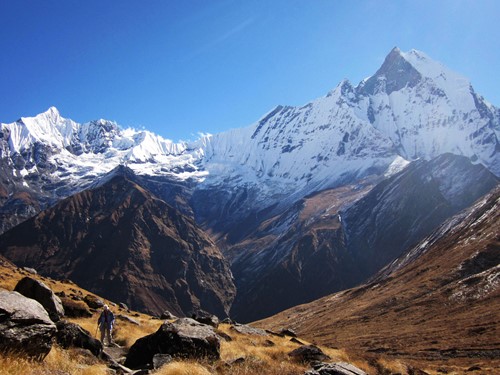 A lovely view from the approach to Annapurna.

Experience Required to Go on a Guided Climb in the Himalayas

Almost all of the peaks in Nepal require a basic understanding of snow travel. Familiarity with an ice axe and crampons are a must for most mountains. However, you can be trained with the gear while on the expedition for peaks such as Mera Peak or Island Peak. Understanding and familiarizing yourself with your gear, especially footwear, prior to a climb is paramount to your success.

Each climb has a list of gear required for your expedition. Understanding how to use this gear and field testing it prior to bringing it to the Himalaya is extremely important. You want to be as comfortable as possible during your trip, so knowing and understanding how to properly fit your pack, put on your crampons, select the proper sleeping bag or even use a water filter will help aid in the comfort of your journey. Try purchasing gear at shops that have a good return policy. Several gear shops will allow you to purchase gear and return it if it isn’t quite what you are looking for.

With the right gear and appropriate climb selected for your skill level, the next thing to concentrate on is physical fitness. Climbing a mountain is never easy. Add in the high altitude of the Himalayan peaks and even the “easier” climbs become quite tough. If it is at all possible, understand how your body behaves at altitude. Everyone is different. Knowing if you tend to have an upset stomach, headache, feel dizzy, or feel lethargic is helpful while you are climbing. That way, when you do begin to feel the effects of altitude you remain calm, stop, rest, and tell your guide what is up. 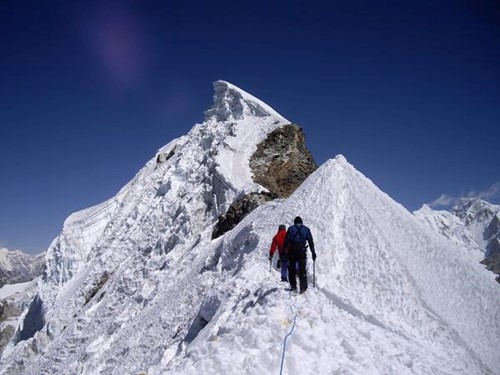 Approaching the summit of Yala Peak.

Preparation for a Himalayan Climbing Expedition

Here at Adventure Alternative we do everything in our power to properly acclimatize, however there are a few things you will need to do to take care of yourself while climbing. Always stay properly hydrated. Drink significantly more than you need. After you pass 3000m you will want to drink about double your normal water intake. Force yourself to eat at every meal, even if you don’t feel hungry. Altitude suppresses appetite, but you need fuel to climb. A handy trick is to bring your favorite treat from home (as long as it isn’t cow, cows are sacred in Nepal). It’s a great way to motivate yourself to eat, and also a neat way to share your home culture with others.

Lastly, prepare your mind for the task at hand. Climbing a mountain is just as much as a mental task as it is physical. Instead of focusing on the entirety of the climb, focus on one small segment. Whether that be what it is you need to accomplish that day, or even a point just 10m in front of you can really help. Understand your own limitations and remember everything you come up, you must also descend.

Another great trick is to sleep lower than the highest point you have walked to. Most villages in the Himalaya are built into a hillside, with a trail going to the top of the nearest hill. It’s always a good idea to rest after you have made it to your destination for the day, then venture out again and try to climb higher. Then return down low to sleep. When doing extreme high altitude, such as an Everest expedition, there will be plenty of opportunity to go on acclimatization hikes or sleep at a high camp and then return to a lower one the next day.

Experience the Culture of the Himalaya

One of the best parts about being in the Himalaya is enjoying the company of the Sherpa people. With their own language, culture, cuisine, and lifestyle, these hearty mountain folks are some of the most welcoming ethnic groups in the world. Mostly residing in Nepal and Bhutan, this ancient culture was once nomadic, traveling the Himalayan mountains between Nepal and Tibet. Today, most Sherpas have a home village, although it is not uncommon to see them live in the high alpine environment for the tourist and climbing season, then head to warmer temperatures in the lower mountains over winter.

The most famous Sherpa village is arguably its oldest, Tengboche in the Khumbu Region. The Sherpa people are primarily Buddhist and Tengboche is home to one of the world’s highest monasteries. Mostly known for their incredible mountaineering skills, Sherpa believe in community and a harmonious existence with the land. Furthermore, their architecture is quite stunning, especially when you realize that everything is brought in by beast of burden or on foot. Most buildings are made of stone and have ornately painted windows, with special attention to colorful details.

The valleys throughout the Nepalese Himalaya are well trodden and the approach routes to these peaks have many villages where you can enjoy local hospitality and buy stores. Nowadays mountain tourism has made its mark though, and it is important to tread lightly in these fragile environments. Waste management is a problem in the Himalayas, and it is up to the visitors to set a good example. Our trips support local initiatives like porters’ rest stations, plus we have helped to fund clinics and monasteries and schools in the solu Khumbu.

A visit to Nepal to climb the Himalayas is a rite of passage for any climber or even trekker, and our trips offer first class guiding and support with an emphasis on sustainable growth in the region.