Bali, the island of the Gods, is an Indonesian island known for its varied landscape of forested volcanic hills and mountains, iconic rice terraces, golden beaches and coral reefs and a deeply spiritual Hindu culture with colourful ceremonies and magnificent temples and historical attractions. It is just over 2  kilometres from the eastern tip of the island of Java and west of the island of Lombok.

There is a unique aura in Bali, something authentic that is difficult to describe but it has inspired trekkers, travellers, yoga enthusiasts and holiday makers from all over the world for decades. Its not just your average tropical paradise, it has something to do with the Balinese themselves and their warm, open and welcoming character, something which you have to experience to believe but it also has something to do with the respect and the freedom you can enjoy to be yourself, a feeling that is priceless in itself.

Adventure trekking holiday on the island of God's to explore the peaks, jungle, culture and historical architecture of Bali, a location of natural beauty.

Map of the island of Bali 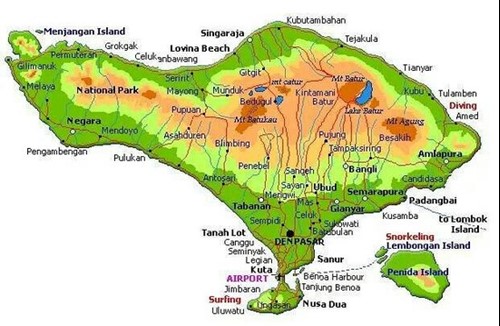 Bali was inhabited around 2000 BC by Austronesian people that had originally migrated from the island of Taiwan to Southeast Asia and Oceania through Maritime Southeast Asia. Culturally and linguistically, the Balinese are closely related to the people of the Indonesian archipelago, Malaysia, the Philippines and Oceania. It is currently one of the 27 provinces of the Republic of Indonesia and the island is divided into eight regencies, plus the municipality of Denpasar, which follow the boundaries of the last Balinese kingdoms prior to Indonesian independence in 1945, at the end of the second World War.

You can travel to Bali at any time of the year but you should be aware that there are two distinct seasons - the wet season generally falls between October and early April, and the dry season kicks in mid-April through to early October. With this in mind, the best time to visit Bali is generally during the summer months of June, July, and August when the weather is driest and the days are sunny with temperatures, ranging between 29-31°C, and only cooling slightly in the more central regions around Ubud and the mountains. To avoid the crowds during the European holiday months of July and August its better to consider travelling during the months of April, May, June and September when conditions remain warm and sunny.

Best time to trek in Bali

October is officially the start of the wet season, so brief bursts of rainfall should be expected this month but there will still be long spells of sunny days, however during the months of November, December, January and February rainfall is much heavier with longer shower bursts. January is typically Bali’s wettest month and although you can still expect hot sunny days with average temperatures of 26°C, these will be interrupted with tropical downpours. In the higher regions around Mount Batur, temperatures are cooler and can drop to 15°C at night but visibility can be poor throughout the wet season so if you can, plan trekking holidays from April through to October.

There is just the one airport on the island of Bali offering domestic and international flights, its called Ngurah Rai but is also known as Bali airport or Denpasar airport. – Flights from the UK to Bali take around 17-18 hours and usually have one change (mostly in the Middle East of South Asia) so you can easily get a flight from a number of the major cities across the UK, however Indonesia's national carrier (Garuda Indonesia) is planning to switch its existing London Heathrow to Jakarta service to run a direct one-way flight from London to Denpasar in Bali. Ngurah Rai International Airport is located in southern Bali, 13 km south of Denpasar.

In normal circumstances, if you're travelling on a British Citizen passport, you do not need a visa to enter any part of Indonesia (including Bali) for visits of up to 30 days. Other nationals should check with their nearest embassy. Passports should be valid for six months beyond the date of entry and have at least two blank visa pages.

Health requirements for travelling to Bali

Hepatitis A and Typhoid are recommended, Rabies, Hepatitis B, Cholera and Japanese Encephalitis may be recommended in some cases. You should also ensure you are up-to-date on routine vaccines (MMR, Diphtheria, Tetanus, Polio, Chickenpox and if required, your yearly flu shot). Travellers arriving from countries with a risk of Yellow Fever may need an International Certificate of Vaccination (ICVP). The general risk of malaria in Bali is very small, however if you plan to visit rural areas for a longer period, or do a lot of mountain trekking then you should consider malaria prophylaxis.

Bali has excellent hospitals and high-quality medical care available 24-hours a day. While the public system is more advanced in some areas, the level of care and quality of infrastructure is much higher in private hospitals on the island.

The tap water in Bali is of uncertain quality, water used for drinking and brushing teeth should be boiled, treated or bottled water. The ice in Bali is safe – the island's ice supply is quality-controlled by the local government.

The official currency for Bali and indeed the whole of Indonesia is the Indonesian Rupiah (IDR) which can also be shown as Rp. If you’re travelling with cash bring Sterling, Euros or US / Australian Dollars. US and Australian dollars are better regarded and generally secure the best rates but its not that big a difference where you need to change Euros or Sterling in to Dollars before travelling.

ATMs are easily found in Bali's most populated areas (though not always working and they tend to give out the cash before the card so many people walk away leaving their cards hanging out of the ATM!) and most accept ATM cards and credit cards for cash withdrawals. Debit cards are accepted by some ATMs on the Maestro and Cirrus networks. Outside large shops and tourist hotels you should expect to pay for purchases in local cash.

Dress as modestly as possible, especially when visiting temples and in rural areas. When paying a visit to a Balinese temple, both men and women are expected to wear shirts that cover shoulders and part of the upper arms and a kain, or sarong. Flip-flops are acceptable, as long as the overall look is modest. Bikini's and swimwear is fine for the tourist beaches and hotel swimming pools but away from here try to be conservative.