It used to be that the quickest way to get to Everest Base Camp was to fly into Lukla airport. Now all that is about to change with the building of a new road that is already more than halfway to the town of Lukla and which will open up the whole region to new tourism and commerce.

Lukla ‘Hillary Tenzing’ Airport was built in 1964 to bring supplies into the Khumbu originally, but in the 1980s it became the entry point for tourists trekking to the Khumbu region of Nepal wherein Mount Everest lies. Nowadays some 30,000 people a year fly into this infamous town with the sloped runway and its moniker as the most dangerous airport in the world. 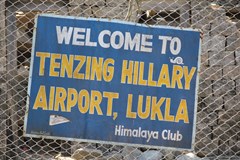 Jiri to Everest – the ‘Classic’ trail

There was always another way to reach Mount Everest though, but it involved a much longer walk from the nearest point on the road, a village called Jiri. This route took over three weeks and meandered through the beautiful solu Khumbu region where the Sherpas live and farm, but for many trekkers it took too long. The so-called Classic Everest Trek became less popular and the lodges on the trail below Lukla suffered. The two week in-and-out trek via Lukla became the default itinerary.

Now that is all about to change. The Government is building a road to Lukla and recently I walked along the section which runs from Taksindu to Paphlu. It is now possible to drive all the way to Taksindu from Kathmandu and it was very strange to have taxi drivers offering me a fare! The road is not properly flattened and surfaced all the way, but the speed of the engineering project is amazing.

Meanwhile Paphlu airport is completely renovated with a new longer runway; as it is lower than Lukla, it does not suffer the same issues of weather problems, plus it’s flat. The town is growing fast, there are probably ten or twelve new lodge hotels being built as I write.

The sense of expectation is palpable and in every lodge and cafe from Lukla all the talk is of The Road. It will affect everything and everyone, a massive enterprise that will change the entire economy of the region. Villagers in every town are wondering if the tourists will bypass them or stop overnight and this is the golden question. Villages that become stopping points for the expected visitors will clearly benefit, others will just become a passing view from a bus window.

The surveyor deciding these things is a man with a mission and he was in the village of Bupsa while I was there recently. He was being vocally lobbied by the Chairman of the Village Development Committee (VDC) which has traditionally been the liaison between Government and communities across the country. There is talk of Business Trading Points, Tourism Centres and even Coach Parks. Already the shops are full of new stock being brought in, ironically cheaper than you buy in Kathmandu. The trucks coming from India bypass the capital altogether and go straight to the Khumbu.

Will it change the normal itinerary for going to Everest?

So far the unsurfaced road is only three days away from Lukla by foot, and the huge bulldozers are edging their way steadily over passes and along mountainsides. The surveyor believed that by next year it will be completed.

The question is whether tourists will use this new road. Most treks to Everest Base Camp take two weeks which fits nicely into an annual holiday break for people in Europe. Taking the high road would make it closer to three weeks.

Meanwhile at Lukla airport the mayhem continues when bad weather causes delays for hundreds of trekkers who are desperate to get out. It doesn’t take long for the lodges to fill up with waiting passengers, but the airlines and air traffic control are tight on flight safety now. Recent crashes in the past number of years have made headlines around the world.

Interestingly, for all the concerns about airlines flying in and out of Lukla airport, most delayed trekkers on their way out couldn’t care less about safety, they just want to get on any flight. Frustration and impatience turns to anger and complaints with people crowding the tiny check in area trying to get onto the first aeroplane. Agents and fixers and passengers throng the waiting areas, but nobody knows any more than anyone else. It's just a matter of being patient.

Years ago when I first travelled here there was one flight every few days and everyone waited. I still have that mentality. If there’s bad weather I read, eat and sleep. There’s no point in trying to influence when you might be flying. But nowadays even a few hours delay can result in a ruckus. A few years ago the police were flown in from Kathmandu to deal with tourists fighting to board the planes. As one pilot said to me “Tourist become like animals”.

Future of tourism in the Khumbu

Who can guess at the future of tourism in this part of the world? Nepal needs the income badly and after the earthquake and then the economic blockade from India, it has suffered hugely. No wonder the villagers below Lukla are looking forward to The Road.

Meanwhile the rich Sherpas with big lodges on the trail now use helicopters instead of walking, they send their children to American colleges, own several houses and go on foreign holidays. Their entrepreneurial spirit and sheer hard work and courage means they have succeeded, and for them this road offers more potential and more opportunity.

They have retained their cultural pride and identity, and their ethnicity is famous worldwide. Mount Everest has put their homeland on the map and their bravery in the mountains has made them icons. I believe that the future of tourism in this area will not only be influenced by a road, but by their continued presence and personality. People come to see the mountains, but they leave with memories of the Sherpas.