We outlined some basic country information about Malaysian Borneo below. For more detailed information please check out our other pages on Borneo as well as the pages pertaining to your specific trip. If you can't find your answer here, do not hesitate to contact us with any questions you may have.

Borneo is the third largest island in the world after Greenland and New Guinea, and is divided among three separate countries: Indonesia, Malaysia and the Sultanate of Brunei. The Indonesian portion of Borneo is known as Kalimantan and the Malaysian part is divided into two states, Sabah and Sarawak. Our trips are based in Sabah and Sarawak, the two Malaysian states. 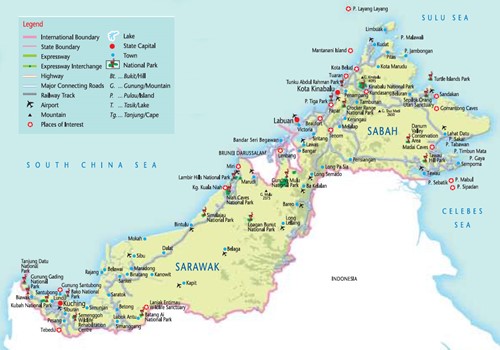 Straddling the equator, Borneo gets between 4000mm - 5000mm per annum of rainfall. This generally falls during the two monsoon seasons between November to August, although rarely affects travel and activities. This rainfall, combined with average temperature of 30-32°C and high humidity levels have created a treasure trove of natural wealth. With over 15,000 species of flora and fauna, Borneo is one of the most bio-diverse destinations on the planet.

The people of Malaysia Borneo are equally as diverse with nearly 200 local languages and dialects spoken from the coastal areas to the forested interiors. With only eighteen million inhabitants, the population density is low with many people still living in rural kampongs (villages). Once infamous for their headhunting tribes, the people of Borneo now live peacefully as a nation of mixed ethnic groups and religions. While predominately Muslim, Sabah has a large Christian population and Sarawak is majority Christian, both with small minorities of Buddhist and Hindu communities. A British colony for over a century, Malaysian Borneo has been a democratic constitutional monarchy since gaining independence in 1963.

The state capitals, Kuching in Sarawak and Kota Kinabalu in Sabah, are the largest urban centres with international airports and the widest range of hotel and restaurants. Street crime and begging is rare, but like anywhere, normal levels of caution should be exercised in cities. Most of our Sabah trips start or finish in Kota Kinabalu; a small sea-front city, KK as it locally known, has fantastic sunsets over the South China Sea and an array of activities from island hopping and diving in the nearby marine park, to white water rafting. The Sarawak capital, Kuching, is the start city for our Sarawak trips; spared from the World War Two bombing that other Borneo cities suffered, Kuching has some wonderful architecture, museums and shopping opportunities with the best handicraft selection in Borneo.

Since our tours all take place on the Malaysian part of Borneo, the only currency you will need is the Malaysian Ringgit. You can see current exchange rates here. Typically, no other form of currency is accepted. Also, for more information regarding ATMs and credit cards please see our Practicalities Section.

Borneo time is GMT/UTC plus 8 hours. Check out the local time in Borneo here. The country code for Malaysian Borneo is +60. For information regarding internet connectivity and cellular service please see our Practicalities Section.

How Do I Charge My Electronics While in Borneo?

Borneo uses British BS-1363 socket type. The voltage is 220-240. Electricity is widely available throughout the majority of Borneo. Sabah and Sarawak are modern cities with modern amenities. In more rural areas, a reliable source of power may be harder to come by. Some villages are powered by generators or solar power for a few hours each day. It is recommended that you ensure your electronics are charged prior to traveling to rural areas. If you are concerned, back a battery pack with you.

What Language is Spoken in Borneo?

There are over 200 different tribal languages spoken on the island of Borneo. However, Malay is the official language of both Sabah and Sarawak. Malay is widely spoken throughout Borneo. English is also common, although not spoken by everyone, most people do understand some English, especially in areas frequented by travellers.

It is always a good idea to learn a few words of the local language before you arrive at your destination. Even if you can only say hello, it goes a long way in the minds of the local people. Check out this list of helpful Malay phrases.

What is the weather in Borneo?

Borneo has an equatorial climate. It is generally very warm and humid as you would expect from a jungle ecosystem. Temperatures rarely rise about 32 Celsius and rarely drop below 20 Celsius at night. At higher altitudes in the interior of the island temperatures can be a bit cooler, so please be prepared when travelling to those areas. The humidity usually rests between 70%-85%.

Rainfall is common throughout the year, usually happening in large bursts. Borneo gets between 60 to 180 inches of rainfall a year. The wettest months occur during the monsoon season from October through February. March until September is considered the dry season. However, this is a jungle habitat, so expect rain throughout the year. Even during the monsoon, you can have sunny days, but when it rains, it rains quite intensely. Be sure to have rain gear with you during your travels to Borneo. Mount Kinabalu has its own weather patterns.

For more information on preparing for your jungle safari read our Borneo Jungle Tips.

For more information about travel in Borneo, you can check out these additional resources.