We are specialists of the Seven Summits and offer guided climbs to five of them. The two we do not offer are Denali because the National Park only offers concessions to the American operators, and Vinson which is monopolised by Antarctic Logistics Expeditions. We offer Carstenz Pyramid and Everest more or less as private expeditions, but all the others are annual scheduled trips.

For information about each of the Seven Summits, see below our offered trips.

Seven day camping trek over 38 miles and a total ascent of 4157 metres, and a dramatic diverse change in habitats.

A classic ascent of Europe's highest peak and one of the seven summits in the Caucasus mountains of Russia.

A guided expedition to the summit of the highest peak in South America at 6962 metres. A challenging but not very technical expedition.

A remote expedition in West Papua to climb one of the Seven Summits.

Mt Everest: The Top of the World

Mt Everest sits at the top of the world at 8,848m high. It is one of 14 peaks that are over 8,000m. Straddling the border between Nepal and Tibet, Everest is an iconic peak nestled deep in the stunning Himalayan Mountain Range.

Mount Everest has over 18 named routes, with a few that are still unclimbed. The standard route is up the Nepal side along the South Col. This is the original route up Everest taken by Sir Edmond Hillary and Sherpa Tenzing Norgay. The route crosses the treacherous Khumbu Icefall. 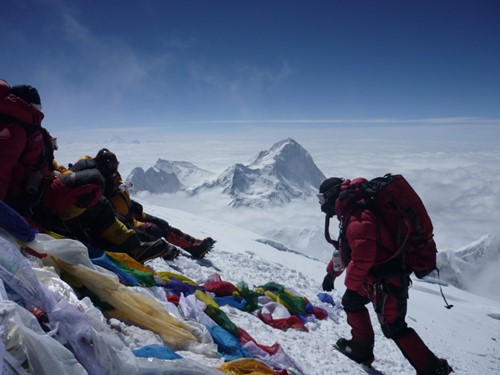 Arriving at the summit of Mount Everest, the world's tallest peak.

Years of preparation, training, and experience are required to climb this mighty mountain. Expedition skills are expected and many prior technical climbs are required to attempt the summit of Everest. Most climbers opt to use oxygen above 7,000m as oxygen levels are greatly reduced. Your body starts to shut down at 8,000m or in the Death Zone. Proper training and acclimatization are essential for a successful Everest Summit and even then, results are not guaranteed.

Mt Aconcagua contains several glaciers including the 10km long Ventisquero Horcones Inferior. The standard route up Mt Aconcongua is a non-techical walk up from the Northwest Ridge or the Horcones route. Although routes do not require technical climbing skills, they do require knowledge about travel with ice ax and crampons as well as previous expedition skills. Most people have climbed mountains such as Kilimanjaro or Elbrus before attempting Aconcagua. 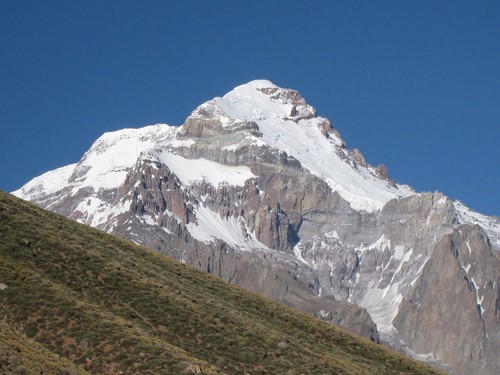 The view of Aconcagua from the Vascas Valley.

Even though most routes up this peak do not require technical skill, climbing to 9,961m is no easy feat. Proper acclimatization, experience camping and traveling in cold weather, and endurance are required to make this mighty climb.

We offer two different routes up Aconcongua, the Horcones route and the Vacas Valley route. Each year we have one trip up one of these routes.

The Horcones Valley route heads up a lot of scree and rock. Some years there is snow, which is a blessing, as travel is much easier with crampons and an axe than it is over rock and scree. Weather can be extreme and it’s important to be prepared for wind, snow, hail and storms. There are fantastic vistas of surrounding rocky peaks and stout cliffs.

The Vacas Valley route, also known as the Polish Glacier Traverse skirts around the Polish Glacier. This is a quieter climb, with only 35% of climbers choosing this route. Many say that the views are better from this side. The downside to this route is that summit attempts must be made from a lower elevation at around 5,600m instead of 5,940m to Berlin Camp on the Horcones Valley side.

Mt Kilimanjaro the Roof of Africa

For those looking to gain mountain experience and feel as if they are on top of the world, head to the Roof of Africa atop Mt Kilimanjaro. Kilimanjaro sits at a staggering 5,895m above sea level. With no large mountain ranges surrounding this giant volcano Kilimanjaro is the highest free-standing mountain in the world. It is easy to see where this mighty peak gets its nickname.

There are several routes up Kilimanjaro and we offer three distinct routes as well as the newer Northern Circuit. None of these routes require previous high-altitude expedition experience, technical climbing or expedition skills. Kilimanjaro is the perfect mountain for those looking to get their feet wet with big peaks, or seasoned mountaineering vets who are looking for a gentler climb in the heart of Africa. 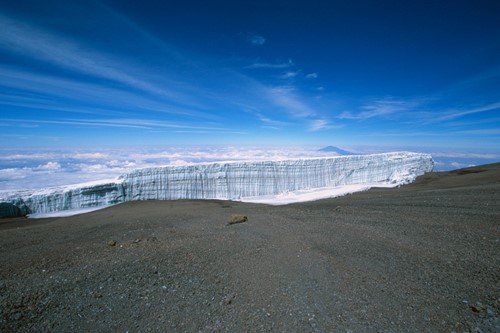 Kilimanjaro has two glaciers the Rebmann Glacier and the Furtwangler Glacier.

The Machame route is the standard and most popular route up Kilimanjaro. Seen more as a wilderness route, this trail allows for excellent acclimatization and fantastic scenery. You ascend through the Machame forest up to the top of the of this usually snow-covered peak. There are five distinct habitats to discover, making it a journey through the natural world.

Adventure Alternative also offers climbs up the Lemosho Route and Rongai Route. Lemosho takes an extra day to accomplish. The approach differs slightly from the Machame route, but the paths converge in the forest. The benefit is an extra day of acclimatization. The Rongai Route sees lower traffic and is easier compared to the Machame and Lemosho routes. With a gradual ascent and a few extra days for acclimatization, this route offers a more leisurely approach to the mountain.

The Northern Circuit Route up Kilimanjaro is a new and exciting way to really immerse yourself in the climb. Taking 12 days, with nine days on the mountain this route starts out up the Lemosho route and then heads north to circumnavigate the main summit massif. You then pass the Rongai route and approach the summit from the eastern side before descending back down via the Mweka route. This circuit gives you the best of Kilimanjaro from all angles.

Mt Elbrus in Russia the Highest Point in Europe

When most people think of the tallest mountains in Europe, they are likely to turn to the likes of Mont Blanc and the Alps. However, Mt Elbrus wins the prize for the tallest standing 5,642m tall with two distinct summits. Reaching the summit of this mountain is no easy task, however, it is one of the less technical climbs of all the Seven Summits. Despite being known for being an “easier” mountain in the Seven Summits, Elbrus can certainly still be quite deadly. Many people underestimate this mountain. Weather can be violent and unpredictable on Elbrus, making it particularly challenging. Since the mountain does not require prior technical climbing experience, Elbrus provides a great introduction for those looking to gain some high-altitude mountain experience. 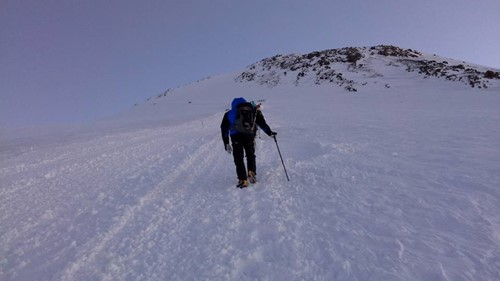 Mount Elbrus is located in the Caucasus Mountains, known by many to be one of the most rugged mountain ranges in the world. The mountain itself is an extinct volcano. There are two main routes up Elbrus, the North and the South Route. Both routes required the use of an ice axe, crampons, and teamed roped travel.

The South Route up Mount Elbrus is considered the standard, more common route. This route is highly developed compared to most of the Seven Summits, with chairlift systems that carry equipment and hut accommodations. The North Route is less trafficked and more committing than the south. There is a distinct lack of infrastructure when compared to the South, making it feel more like a true mountain experience. Lodging is predominantly camping and teams must support themselves. There is a third option to traverse across to both summits of Elbrus, providing the opportunity to summit both the North and South summits of Elbrus.

Carstenz Pyramid is the highest peak in Oceania standing 4,848m tall. It is the lowest of the Seven Summits. What it lacks in altitude, it makes up for in difficulty and remoteness. Many have skipped this climb over the years, due to a history of political instability and remote location. Carstensz Pyramid embodies remoteness, tucked away deep in the rainforest on the Indonesian side of Papua. 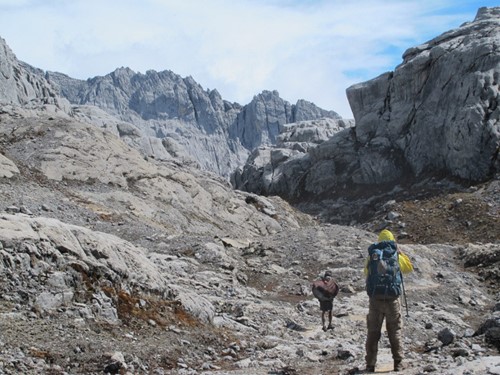 Conditions on this mountain may be the most diverse among the Seven Summits. The approach requires difficult travel over dense jungle terrain and the climb culminates on a snowy, rock ridden peak. As the only summit requiring technical rock knowledge, team members are expected to have plenty of technical climbing experience over rock and highly tuned expedition skills.

Vinson Massif takes the cake for the most remote peak of the Seven Summits. Located near the west coast of Antarctica this massif is approximately 21km long, 13km wide and stands 4,892m tall. In the summer, this mountain sees 24 hours of daylight. Weather in the area is predominantly stable with the exception of high winds, snow, and extreme cold. 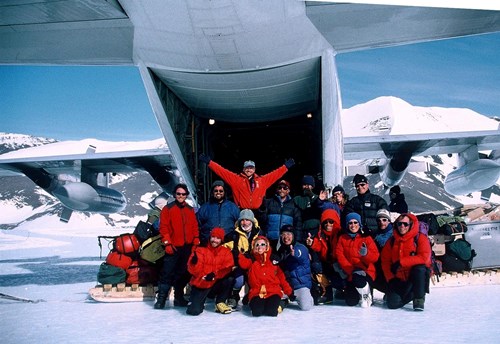 The Vinson Massif is so remote you need a cargo plane in order to access it.

Most climbers ascend via the west side, although in 2001 a team successfully completed a route up the east side. The terrain offers little knowledge of technical ability, however, extensive knowledge on how to survive in Antarctica and the extreme cold are certainly required.

Mt Denali, formerly named Mt McKinley, is the tallest mountain in North America. Located in the State of Alaska in the US, Denali is the third most prominent and isolated peak in the world. The mountain contains two distinct summits, north and south. The south summit is slightly higher at 6,140m.

Denali is one of the more technical of the Seven Summits. Along with Everest and Carstensz Pyramid, this mountain requires a depth of technical climbing skills on both rock and ice, mountain experience, and prior expedition experience. Denali has significant exposure, plenty of glaciated terrain and high avalanche risks. 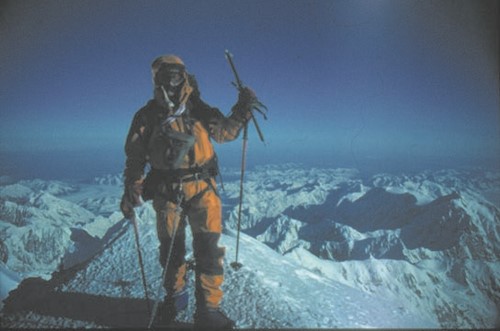 Multi-time Seven Summit Achiever and Adventure Alternative owner, Gavin Bate, on the top of Denali during a late winter ascent in 1997.

Similar to Everest, expeditions on Denali take more time than the average time on each of the Seven Summits. Although Everest may take several months, reaching the summit of Denali often takes up to a month.

Climbing the Seven Summits, either all or in part, offer an excellent challenge for both the seasoned and beginner mountaineer. With a peak for every ability over a variety of landscapes the opportunity to reach the summit of one of these magnificent peaks is a lifetime accomplishment.