Mount Kilimanjaro is Africa’s tallest peak, and is the highest freestanding mountain in the world. For serious adventurers, Kilimanjaro is often at the top of their bucket list. Completing the trek to reach the top at 5,895 metres is one of the biggest physical achievements you can make as a hiker or climber. But it’s not just your physical strength that you’ll put to the test when attempting Kilimanjaro. You’ll also need to have strong mental muscle and endurance.

As you can see from this map, there are four main routes that we can take you on. These routes have been selected for their incredible vistas, terrain, feasibility and safety. Each route offers something different in terms of camps, difficulty and length of time required to complete.

Overview of Trips with Adventure Alternative

We organise a number of trips for people who want to climb Kilimanjaro. Despite its huge size, it’s a feasible challenge that many people can do successfully with some basic training and lots of determination. Kilimanjaro is the highest walkable mountain in the world!

Here are the guided trips that we organise at Adventure Alternative:

This is a seven day camping trek, with five days ascending. The trip will take 10 days in total including your arrival in Moshi Town, a second day for briefing and sorting equipment, and a final night in the hotel to recover after you return from the mountain. You can depart on day 10, or you can extend your trip with a four day/three night safari.

This is an eight day climb, giving you more time to acclimatise. The trip is 11 days in total including arrival in Tanzania on the first day, a briefing day, and an overnight stay in the hotel after you’ve descended. You can depart on day 11, or you can continue with us for a four day/three night safari.

This is a seven day camping only trek to the summit, with five days ascending through the forest. In total the trip will take 10 days, giving you the first day for arrival and settling in Moshi Town, the second day for briefing and getting a good night’s rest, as well as a final overnight stay in the hotel on return. One day 10, you can either arrange travel back home or join us for a four day/three night safari adventure.

This is a nine day full mountain circumnavigation trip. It’s the longest route, allowing you to explore the mountain in detail. The trip will take 12 days in total, including an arrival day, a briefing and relaxation day, and an overnight stay in your hotel once you return from Kilimanjaro. Continuing with us for a four day/three night safari after your climb is also an option.

The Importance of Using Maps

Studying maps of Kilimanjaro is essential when planning your trip. There are seven routes in total and choosing the right way to go up will affect your success rate and also your overall experience of the climb. A very common mistake is assuming that paying money for a professional guide means a guarantee for reaching the summit. However, all routes have their own success rate and some are trickier than others. You also need to be fully prepared for every stage of the climb and the acclimatisation involved. This is why it’s important to study a map, plan your journey carefully, and navigate seamlessly once you’re out there.

Each route has its pros and cons, and will take a different approach stopping at different camps. Other things to bear in mind include the amount of time you have in Tanzania, your climbing experience and your experience with high altitudes, the time of year and weather conditions, as well as your own level of fitness. If you’re unsure about which route is right for you, get in touch with our team. We can help you choose the best trip and give you advice.

As well as studying a Kilimanjaro map before setting off, it’s also important to use a more detailed map to navigate with. Some excellent maps can be purchased at the Kilimanjaro National Park Gate. If you book your trip with us, we will give you a full briefing the day before and help you sort out all maps and equipment.

Our experienced mountain guides are also there to support you and make sure everyone stays on track. This means that you won’t have to worry about navigating on your own. Over the years, we have guided many groups from around the world, including walking clubs, schools, university clubs, and even record breakers. Our safe acclimatisation programme is what we pride ourselves on, and it has given us an average 95% success rate.

It is not possible to climb Kilimanjaro without a guide because the National Park does not allow it. A guide is essential in ensuring the health and safety of the group and keeping everyone to a suitable schedule for acclimatisation. Even though someone will help you navigate, bringing your own map is still an essential tool for any mountain climb.

Here are some of the maps you can buy to help you on your trek:

Using the Map to Choose the Right Route

While there are seven routes to choose from, we focus on four routes as some of the others are unsuitable or simply aren’t as beautiful when it comes to the views. All of our routes are selected for reasons such as the terrain, the amount of time allowed for acclimatisation, the scenery on the way up, and the ease and success rate of the climb. We take into account all of these factors to create trips that are unforgettable and targeted at success.

All of our routes are camping only. Hut accommodation is only available on the Marangu Route. However, we avoid this route as it’s the oldest and most well-known path that attracts bigger crowds in peak season. With the same pathway for ascent and descent, there can be a lot of problems with traffic.

Other routes we avoid are the Shira Route due to its higher starting point and issues with altitude sickness, and the Mweka and Umbwe routes as these are designated 'down' routes by the Park. They would be too difficult to ascend because of the steep altitude profile.

The routes we recommend are Machame, Lemosho, Rongai and the Northern Circuit. 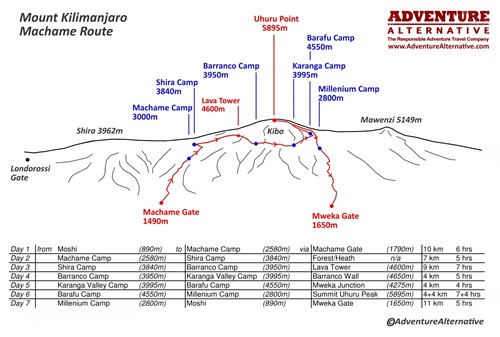 The Machame Route, also known as the “Whisky Route” is our recommended route to the top. It has a very high success rate and our guided trekking program offers excellent acclimatisation. Not only is Machame a great choice for those looking to succeed with their climb, but it also boasts some of the most amazing views on the mountain. There’s plenty of variety in the terrain and landscape, with sights that take in the Shira Plateau, the Lava Tower and the Barranco Wall.

Despite this route being physically demanding, it’s entirely possible for beginners to complete with the right training, prep and guidance. This makes Machame one of the most popular ways to the summit, and we recommend it for climbers at every level and ability. While its popularity means that there are sometimes crowds, the breath-taking panoramic views more than make up for that. 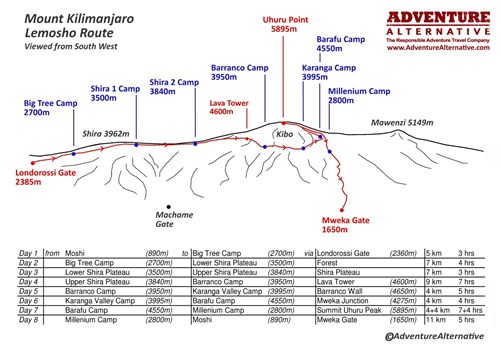 The Lemosho Route is another one that we recommend, and it gives trekkers an extra day on the mountain to acclimatise better. Lemosho takes you on one of the Kilimanjaro’s newer paths, approaching the mountain from the west before merging with the Machame Route after the second camp.

One of the best elements of this track is the remote rainforest at the start, before joining the Shira Plateau and then onto the Lava Tower. In terms of difficulty, it’s very similar to Machame, with steep climbs to take into account but entirely feasible even for new climbers.

This is the only route that starts from the north, giving you a completely different view. Not only that, but approaching from the north side also gives you a little more shelter than the other routes and there’s less precipitation this way. This makes Rongai the best option for rainy season. There are two rainy seasons to bear in mind; the first begins in mid-March and lasts through early June, while the second is from November to early December.

Rongai is also one of the easiest routes up to Kilimanjaro as it has a nice, gradual ascent. The scenery isn’t as beautiful or diverse as Machame and Lemosho, but Rongai certainly wins when it comes to remoteness. 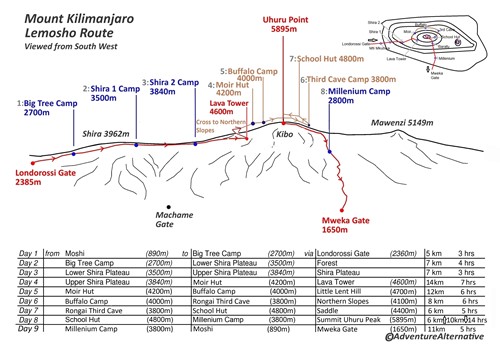 The Northern Circuit is ideal for climbers who have more time, or those without high altitude climbing experience and require more time for acclimatisation. As well as being one of the longest routes on Kilimanjaro, it’s also one of the newest. Success rates tend to be high due to climbers rarely ever experiencing altitude sickness.

This route has the same starting point as Lemosho but goes north instead before reaching Lava Tower, taking you across some of the less-travelled pathways in the northern section of the mountain. It will then take you via Gilman’s Point to get to Uhuru Peak.

In terms of difficulty, the Northern Circuit is similar to the Machame or Lemosho routes.

Mount Kilimanjaro is located 205 miles from the equator, in the country of Tanzania. It is a dormant volcano with three volcanic cones as its peaks; Kibo, Mawenzi, and Shira. Kibo is the tallest of the cones, and this is where the summit lies. While Mawenzi and Shira are extinct, Kibo is dormant. This means that the Kibo cone can erupt again. However, the last eruption was 360,000 years ago and the most recent activity was 200,000 years ago.

The National Park itself is close to the Kenya border, making travel convenient from Nairobi or Mombasa. Kilimanjaro International Airport is less than two hours from Short flights are also possible from Kampala in Uganda and Kigali in Rwanda.

While climbing Kilimanjaro, trekkers will experience five ecological zones as they ascend. The zones get colder and drier as elevation increases, and this means that wildlife will disappear as you near the top. Once you’re close to the summit, you will enter into the arctic zone where there will be mostly ice and rock. At this extreme altitude, your body will be in a state of deterioration. Short exposure to this altitude is fine for the human body, but long stays are not possible.

Although getting to the summit is very feasible and over 30,000 people attempt to climb Kilimanjaro each year, about 50% will fail. The failure is almost always down to problems with altitude sickness. This is why we put so much emphasis on acclimatisation. Our programs allow climbers enough time to adjust, and that’s why we have such an impressive average success rate of 95%.

Find out more about climbing Kilimanjaro with the experienced guides at Adventure Alternative and get in touch with our team today. Call 028 7083 1258 or use our online contact form and someone will get back to you as soon as possible.