Much of the hiking is on scree and rock. Although there are no permanent snowfields, crampons and ice axe are still required for the higher sections. Sometimes the final few hundred metres is covered with ice and snow which is much easier to crampon up, than having to walk up on loose scree after a dry winter.

The route for the Horcones Valley on Aconcagua starts from the road at Puente Del Inca with a two day walk up the Horcones Valley (stopping at Confluencia along the way to acclimatise), a long and dry valley all the way to Plaza del Mulas. The weather can be very extreme, either very hot and dusty or with the potential for snow, wind, hail and storms. The route has stunning views of surrounding peaks and cliffs. 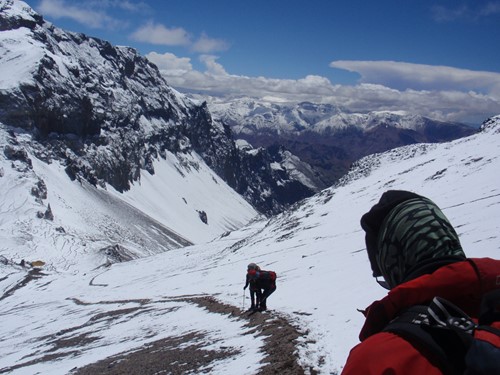 From dusty, rocky terrain to long paths laden with snow, there are a lot of extremes on Aconcagua.

We use mules to take all the gear to this point and stay overnight at Confluencia Camp for two nights. The third day’s walk to base camp takes a whole day and it is tough. It is not uncommon to feel dehydrated, tired and slightly altitude sick on reaching Plaza del Mulas (4200m).

At base camp, there is little or no vegetation, and it is dry and cold with temperatures ranging from -15 to +15 degrees Centigrade. Here we put up our tents and use local base camp services for meals, toilets and showers. There are charging facilities and a free medical service. Base Camp to Camp Canada is about four hours to 5000 metres on a long easy scree slope with a zigzag path. We have to manage some carries of food, gas and equipment.

Camp Canada to Nido de Condores is about four hours to 5400 metres on scree and snow with a path. We will have to stock this camp with food, gas and tents. Nido can be very windy with deep snow. Decisions on summiting are made here since above this camp our supplies will be limited.

Nido de Condores to Berlin Camp is about four-hour hike to 5940 metres, on rock and snow. Everything required for summit day will be carried up in one load normally, so heavy rucksacks are normal. Another option is to hike a little further to Camp Colera (5980m) which is a little more exposed but has more space.  This is a dramatic place to camp with exceptional views over the Andes. We try hard to get some rest, liquids and food into us before attempting to reach the summit.

Normally summit morning begins at about 3 am. Berlin Camp or Camp Colera to the summit is about 8 - 10 hours to 6962 metres on rock, snow and ice, and then about 3 - 4 hours descent back to camp. Summit day is long and hard, very taxing on energy and a considerable achievement. It is always cold and windy and great effort must be put into looking after yourself. This is not a place for cheap equipment. 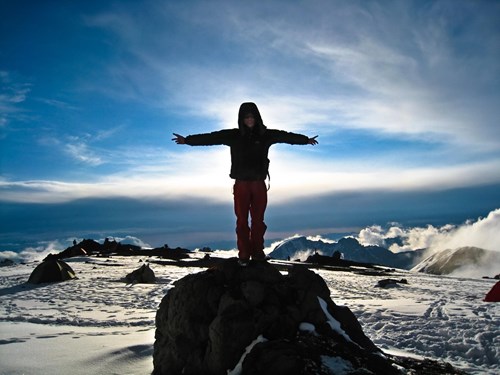 Aconcagua demands respect, determination and discipline. But there is plenty of opportunity for fun.

There are several sections to the summit route, starting with an initial ascent on the mixed ground up to White Rocks at 6100 metres. From here there are fine views over the Polish Glacier and a long set of zigzags on the exposed ground leading up to the Independencia Hut. By now the sun will be up, and the wind and cold can be savage.

There is then a long, low rising traverse to the base of the Canaleta, a 400m steep ascent on a mixture of scree and snow, and then a traverse to the Cresta del Guanaco just below the summit. From here it is another 30 minutes to the summit itself which is quite large; normally spend about 20 minutes on the top taking photos.

The descent back to base camp at Plaza del Mulas is over two days. Either sleep again at the top camp after the summit attempt and the next morning return to Nido de Condores to pick up the remaining gear and brave a very heavy rucksack back down to base camp. Or pack up the tent and get down to Nido straight away, and descend to base the next morning.

GPS Co-ordinates
The 1:40,000 map ‘Cerro Aconcagua’ (ISBN 978-3-9523294-0-5) is compatible with GPS and uses the WGS84 co-ordinating system. You can buy it online from Climbing Map for about €17.50. Below are the GPS coordinates for the main places visited on the Horcones Route and summit day.

This route ascends the mountain by the second most popular way, called the Vacas Valley Route (also called the Polish Glacier Route, although it does not go on the glacier but skirts around the base of it). This route is quieter. Only 35% of all climbers on the mountain take this route, and it has superior countryside, vistas, greenery, flora and fauna. It also has a longer walk-in which is good for acclimatisation, although the base camp is the same altitude as Plaza del Mulas on the other side.

The downside of this side is that the summit day can begin from Camp 2, which is at 5600 metres, slightly lower than the Berlin Hut on the other side, which means a longer round trip to the trip (around 12 hours is normal). It's possible to put in a further camp at Colera which is 6000 metres but this is a significantly difficult day to get the gear this high from Camp 2. Some people do a traverse -  carry gear all the way to Camp Colera at 5980m for the final push to the top, and then descend all the way to Plaza del Mulas. This is a great journey but physically demanding. We generally go up and down the same way, unless there is a specific desire in the team to do the traverse. 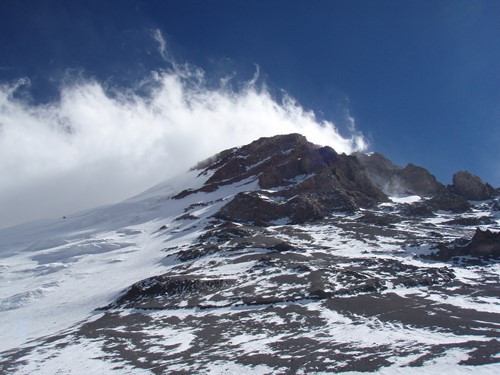 The windblown summit of Aconcagua.

The route is camping all the way and gear is carried on mules for the walk in, which accompany you on the approach to the base camp of Plaza Argentina from the main road at Punta de Vacas (2600m). Note that this walk in requires crossing several rivers and therefore appropriate shoes are required for this (sandals or old trainers). The walk-in is 60 kilometres and 2190 metres of ascent to the Plaza Argentina at 4100m.

From Plaza Argentina, the route follows quite a rocky path to Camp 1 which is at 4650m and a huge area spread over much of the hillside. There are many rock platforms to choose from for your tent. We will make several forays to this point, depositing gear and acclimatising by climbing high and sleeping low.

Camp 1 to Camp 2 at 5600m is a straight walk uphill carrying the gear again and making camp right below the famous Polish Glacier. It can get very windy and cold here with potentially lots of snow drifting around the tents. The route is easy to follow but at this altitude, it is definitely more than just a hike, especially with full packs. 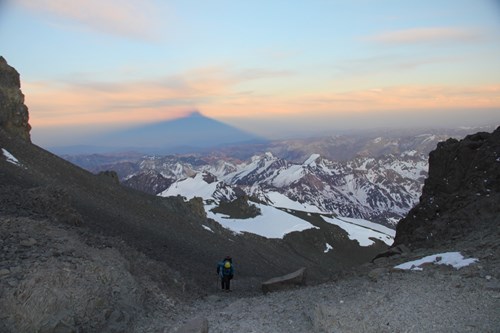 The summit shadow of the tallest mountain in the Americas, Aconcagua.

The summit route from this point crosses beneath the huge Polish Glacier and joins the normal route which is used by climbers coming from the other side near to White Rocks and then continues to the summit via the Independencia Hut and the Canaleta. The descent back to Camp 2 is the same way and generally, people spend one night before going all the way back down to base camp in one day.