This page describes the dangers of Mount Elbrus, rescue procedures and also some thoughts on managing summit day scenarios.

The Dangers on Mount Elbrus

There are no major crevasses or objective dangers on the main route, but the weather is very temperamental and visibility can drop rapidly. Sudden storms and extremely cold weather are common. It is easy to become disorientated and wander off route, and there are many stories of frostbite and cold weather injuries on the mountain every year. A GPS is a useful piece of kit to take if you are experienced in its use.

Altitude is high enough to need good acclimatisation and an increased liquid intake during the climbing period. Summit day is a long day on the hill so it is vital to take plenty of liquid and lots of snacks and energy gels. Even on a day of fine weather, the ascent is exhausting and very challenging. Success will depend a lot on cumulative hydration, plenty of good food and rest, and a lot of willpower. 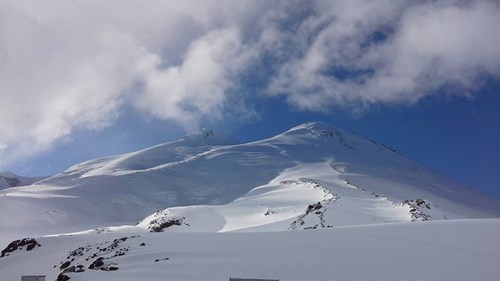 Mount Elbrus on the south side.

Crampons are needed to go to the summit unless the snow is very soft, and walking poles with snow baskets are a necessity. In the early part of the season especially when the ice is harder and there are patches of exposed slope, it is necessary to carry a walking axe and be proficient in its use. We will provide this training during the trip. We recommend a walking axe for all trips even though you may not use it. A climbing helmet is not mandatory on this trip since there is no danger of falling rock, however a head injury can occur during a slip or fall so you may wish to bring one with you.

The decision of whether to use a man rope is one that the guides will make depending on conditions and the ability of the group. The guides will always carry an emergency short rope and slings to help people down if necessary.

The north route pictured below sometimes includes camping at Lenz Rocks at high altitude (4650 metres) in which case you will need to have good camping skills. If the wind is more than 30mph the guide will not make a camp at Lenz Rocks, instead start the summit day from the top hut or high camp at 3800 metres. This makes for a very long summit day and a 1900m gain in elevation. This makes for a very long and tough summit day; the route is not greatly more demanding than the south side, but the distance through the Saddle is a long longer and often that section is full with deep snow which can be doubly exhausting.

The picture below is ascending the south side, you can see the gradient is never very steep but this is an open slope with occasional ice patches and exposed to the elements. Good clothing is essential, including full length down jackets, crampons and good boots to prevent an emergency on summit day. 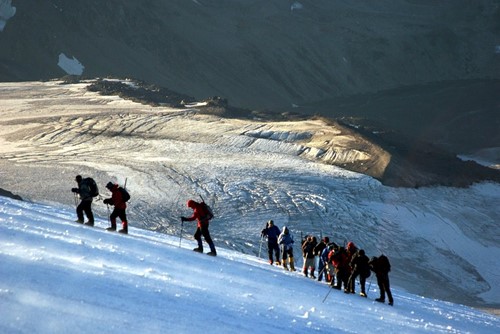 It is possible sometimes that Sasha the guide can manage for some people to come down with one of the guides if they are tired or unable to continue. If there is an accident or someone becomes incapacitated then he will require that everyone in the team assists with the descent, and he will likely call a snow machine to come up as far as possible to help evacuate the casualty.
The ideal aim is to keep everyone together. Sasha will make his decisions based on safety, and he cannot allow 'fast' and 'slow' teams just for the sake of it. Neither will he succumb to any calls for the group splitting, however close to the summit, if he deems that it will affect the safety of any individual in the team.
If some people want to go down because they are too tired or exhausted and it is possible to split the team safely, then one guide will descend with those people and the rest can continue to the summit with the other guides. Sasha will not want to end up with too few guides on the summit ascent, so the number of times that sub-groups can descend is limited. If it reaches a point that the ratios become unworkable and safety is threatened then everybody will have to descend.
Some people try and organise sub-groups prior to the summit day, perhaps to organise a fast group. However Sasha will attempt to prevent this from happening because on summit day there is no telling what will happen. People who assume they are stronger or faster or fitter can suddenly be affected by altitude or any number of factors.

The Use of Fixed Lines on Elbrus

The west summit route to the plateau now has a fixed line in place for added safety. This means that you can clip in very easily, and be held in the event of a slip on that section which is the steepest on the mountain. It's also potentially icy. To clip in you will need your harness and a sling and two screw gate karabiners. Use one karabiner to attach the sling to your harness, and use the other karabiner to attach the sling to the fixed line. When you come to an anchor point on the fixed line make sure you are safe and stable, and then move the karabiner across the anchor and screw it shut again. It’s a simple safety system but you will also need your walking axe and pole for support. If the ground is icy then use your crampons, if it is soft snow then do not wear crampons because they will fill with snow and become mini skis. Be careful because halfway up the route the ground changes and just below the lip to the summit plateau you will find the ground harder, with ice on rock. Make sure your crampons are handy just in case. 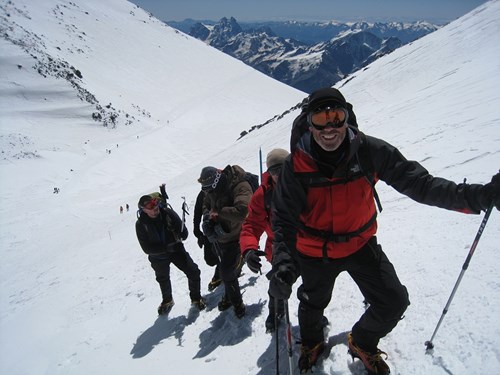 A team heads up a steeper section of snow on the South Route of Elbrus. 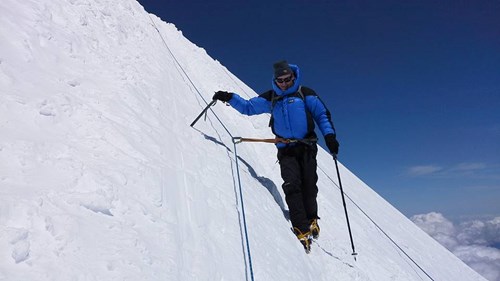 A climber attached to a fixed line on Mount Elbrus

In the event of a rescue or an emergency, the guides and Sasha will manage the situation on the ground along with the mountain rescue team using mobile phones, as there is signal on the mountain. All parties will then co-ordinate a rescue involving an assisted descent down the mountain using primarily the tracked vehicles and manpower on the south side, and only manpower on the north side. Serious accidents may involve the use of a stretcher, and there are several stretchers in the huts on both sides.

If an accident occurs on the summit or in the saddle between the two peaks then there is an emergency shelter in the middle with room for two or three people to sleep if necessary and a group to rest if the weather is bad. This hut is painted a bright orange. There are no supplies inside but it offers shelter and is a useful place to gather resources before descending.

If a group is coming up the north side and runs into problems in the Saddle then it is safer to use the emergency hut and descend the south side where a ratrack can be called and an injured person can be taken to a hut more quickly. On the north side, an injured person would need to be bodily carried all the way to the snowline at the top hut.

Injured people will be taken to the nearest hut and kept warm and safe until a decision is made to move further down the mountain. On the south side, this can again be done with the ratrack vehicles and then transferred to the cable cars to get to the village in less than an hour. On the north side, an injured person would need carried or assisted with manpower to the base camp and then taken by car to the nearest town and hospital.

For all of these evacuation scenarios there is no external assistance, and a helicopter is not a possibility because of the difficulty of landing on the mountain at high altitude. Every rescue becomes a group responsibility and other mountain guides will help. On Elbrus the mountain rescue team is made up from all the local mountain guides and during the season there will always be other people to help and rely on. Inevitably the snow cats play a big part in rescues.

Common reasons for rescue are exposure due to the cold, exhaustion and collapse due to a combination of the cold, tiredness and altitude.

On the south side, the nearest hospital is in Nalchik, about an hour and a half by car from Terskol. On the north side, the nearest hospital is in Pyatigorsk which is close to Mineralnye Vody. There is some mobile signal on the north side from the top hut but none at all at base camp and in all situations, any payments for use of the snow machines would need to be made in cash and recovered later from insurance. The insurance company can help with the repatriation of somebody from the airport to get home but they would be unlikely to make direct payments to a Russian hospital, so therefore you should expect to pay with cash or perhaps a credit card.

Sasha will make his decisions discussing with the other Russian guides and taking into account all the factors. Be patient with the language barrier even though Sasha does speak good English. On summit day there might not be that much chat, and Russian guides are not known for their loquaciousness! There is a complete film of the north side trip on our website plus lots of information pages which will help prepare you for this challenging trip.
One of the negative comments we get from this trip is the language problem between group members and some of the guides who do not speak much English, and also the cultural gap that arises when the Russian guides are not very communicative about what is happening. Sasha Lebedev speaks good English and is communicative but we would advise you to ask questions rather than wait to be told.
The other Russian guides will be very good at their job and at knowing the mountain, but their natural reticence means that some people get frustrated, especially when the weather gets bad and decisions have to be made. The Russians have done this many times before and are well versed in how to manage such scenarios but there is no doubt that people who are used to collaborative, communicative feedback do feel frustrated. Always ask Sasha to explain what is happening and ask him to tell the other Russian guides to do the same as best as they can. 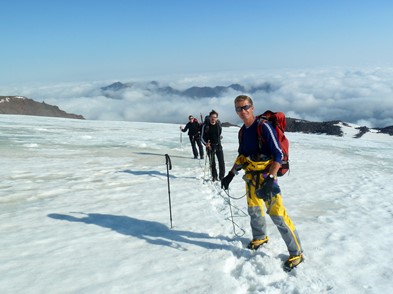 A group travels on a roped team along the North Route of Elbrus.