Weather and Seasons on Kilimanjaro

There is a magic about standing on the Roof of Africa. Mount Kilimanjaro, Africa's tallest mountain, stands 5895m above sea level. The climb offers a view across the African plains from the highest point on the continent. However, being on the equator with two rainy seasons, the best time of year to climb Kilimanjaro is clearly during the drier months. Let's take a look at the best time to climb this mighty mountain.

Since Mount Kilimanjaro is located near the Equator, it experiences a wet and dry season instead of summer and winter. Since wet means rain and cloud at lower levels and snow and ice higher on the mountain, it's best to climb Mount Kilimanjaro during the driest months. The dry season in Tanzania runs primarily from July through October. Also, there's a shorter dry season from January to February, but it's much less predictable than the longer season.

The early rainy season can begin in March and extend through April and into May. The later rainy season extends through October, sometimes beginning in September. Climate change has changed the predictability of these rainy periods though and arguably has meant stronger conditions.

Kilimanjaro now experiences heavy snowfall with ice and very cold conditions on the summit for short periods. It's important to bring appropriate clothing and spikes to put on boots because some of the summit routes are on rock which can be extremely slippery.

Local weather conditions above the last camps at around 4500 metres are considered winter equivalents at high altitude. A combination of extreme cold, high elevation, tricky ground conditions, and low visibility can easily lend itself to a very challenging experience, not least because summit day begins at midnight. 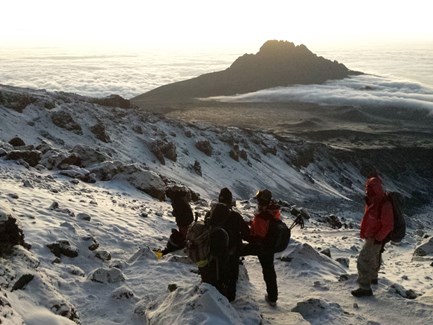 Take note that the best time of year to climb Mount Kilimanjaro is also the most crowded. If you're looking for solitude on the mountain, then choose a quieter route like the Rongai which is generally an eight-day trip. Marangu and Machame routes currently receive the most visitors and the campsites can be quite busy, although there is always plenty of space to put up tents. The campsites all have concrete toilet blocks and a ranger station too, where you are required to register every day.

Clouds and Visibility on Mount Kilimanjaro

Every day on Kilimanjaro the cloud rises up the mountain until it forms almost a complete sea surrounding the summit massif. This is one of the great views from the camps above the forest. At sunset, the sea of clouds is often coloured pink and red, and Kibo (a volcanic point) is dramatically lit up by the last light of the day.

The moon is often very bright in the sky, and being on the equator you can see constellations from the north and south sides of the Earth. These factors make a Kili climb quite spectacular.

Winds and Weather on Mount Kilimanjaro

Kilimanjaro is home to a wind phenomenon called Katabatic winds. This is when the wind rushes downwards, sometimes as fast as hurricane winds. The wind acts as a drainage, carrying the high-density air down a slope with the aid of gravity.

The air cools on the top of a plateau (such as Kilimajaro's summit) and the density increases, causes the air to flow downward. Originating on the glacier, these winds force cold air down the mountain. The unique nature of this wind, and it's moisture-laden contents, means that it is often cold and can cut to the bone.

How to Prepare for Bad Weather on Kilimanjaro

However, in bad weather, the cloud surrounds the summit massif and it can be windy and cold and wet all the way up to the summit. It's advisable to take a pragmatic and somewhat fatalistic view about the weather on Kilimanjaro and accept that at least one day on the trip will be a bad one, and hopefully, the summit day will be clear and windless.

For bad weather, it's important to be prepared. Always carry a windproof and waterproof layer, both a jacket and pants. Insulate yourself against the cold with a puffy layer for extra cold temperatures and around camp. A fleece layer is also handy since when you're walking your body will generate its own heat to keep you warm. This light layer helps protect against cutting cold winds but also allows your body to breathe so your sweat doesn't build up, making you feel colder. 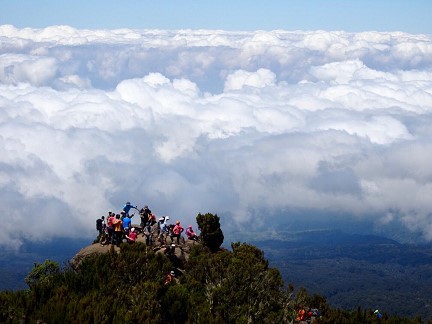 Check out our guide here on what you should wear on your Mount Kilimanjaro climb.

The weather is heavily influenced by trade winds that come from the Indian Ocean. These winds blow moisture-heavy air from the ocean to the land from March until May, making this time the wettest season on the mountain.

Wet and damp will obviously define the experience on the mountain, but it also means the views from the top could be socked in with clouds and moisture. It will be important to have excellent gear for rain protection. GoreTex is your best bet, opt for a breathable rain layer for both pants and jacket. You'll want vents to let your body air out as you climb.

The photo below was taken mid-October showing cloud building around the base and also over the summit itself. These clouds are typical for the rainy season and can often block views to the valley below. However, it is a surreal feeling hiking among the clouds. 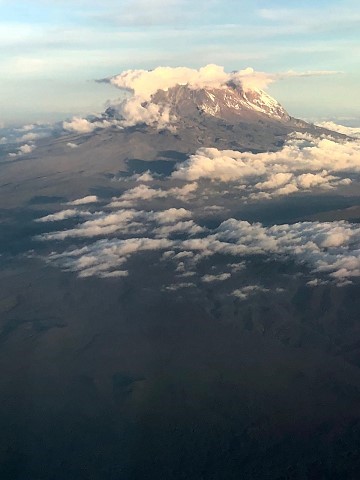 If you can only climb during the wet season, then consider climbing the Rongai Route which starts on the northern end of the mountain and typically receives less moisture.

We offer climbs of Mount Kilimanjaro year-round because the demand is there. We tend to climb the classic Machame Route because it offers the best experience of the separate ecosystems that you pass through.

The Machame Route also has a good acclimatisation programme since the sleeping altitude for nights 2, 3 and 4 are almost the same. This really does allow for the body to get used to the effects of altitude. The Lemosho route actually joins the Machame route on day 3 anyway, but it allows a slightly longer approach through the lower levels of forest which would add to acclimatisation.

Finally, the Rongai route is the quietest but it also requires the longest drive to the gate at the start.

You can really climb Mount Kilimanjaro any month of the year. However, climbing during the wet season is a vastly different experience than climbing during the dry season. Either way, you'll want to be prepared for varying conditions, sudden changes in weather, and cold temperatures on the mountain.