Kilimanjaro is the icon of Africa and rightly so as it’s instantly recognisable snow-covered peak towers thousands of feet above the warm, vibrant, wild plains of East Africa. That image adorns many books, magazines, websites, and brochures, but to see it in reverse, from the summit looking down upon the plains, is even more worthy! It’s not one easily seen, not without some effort, but it is one that will be burnt into your memory for your lifetime!

Many people wonder – could I? Should I? How? Well, as a start to your research, here’s some facts about climbing Kilimanjaro!

Kilimanjaro is located in Tanzania, East Africa and is close to the border with Kenya.

Kilimanjaro is the highest freestanding mountain in the World – meaning it’s not in a mountain range. It’s also the highest volcano in the world and originally had three peaks (Shira, Mawenzi and Kibo) which were formed millions of years ago due to volcanic activity. Shira eroded giving us today the Shira Plateau (also the highest plateau on earth) and today Kibo is the highest point of the mountain and also on the continent of Africa, making Kilimanjaro one of the 7 Summits – the highest peak on each continent.

When was Kilimanjaro first climbed?

A German geologist called Hans Meyer along with Kinyala Lauwo, a local man and guide – now known as ‘The Old Man of Kilimanjaro’, who was aged 18 at the time and donned in a blanket, were the first to climb Kilimanjaro on the 6th October 1889. 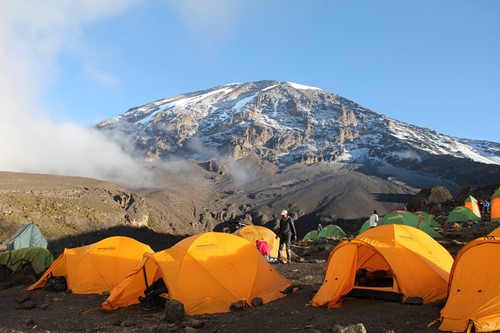 Where did the name Kilimanjaro come from?

There is some debate as many tribes live on and near the mountain and all have different languages and names however the most accepted is that the name is a mixture of both Swahili with ‘Kilima’ meaning mountain and  from the Chagga tribe who to this day reside upon her lower slopes the word Njaro, meaning whiteness.

How hard is it to climb Kilimanjaro?

To climb Mount Kilimanjaro is a challenge mainly due to altitude and fitness. Most hill walkers and trekkers are fit enough to climb it, but it must be approached in the correct manner, with a good guide and support team to ensure you reach the high camp, from where you’ll launch your summit bid, in good health and well acclimatised to the lower levels of oxygen in the air. In general, if you can easily walk 6 hours a day over undulating ground for several days in a row at home, then you should be in good stead to tackle Kilimanjaro.

How cold is Kilimanjaro?

The mountain, especially the lower regions can be pleasantly warm, if not hot, but like all mountains there can be rain, hail, and snow higher up. A climber needs to ensure they have kit and equipment to keep them warm, sheltered and dry in all elements from sun / high UV to extreme cold exposure as in the higher realms you can experience blizzard conditions and temperatures of -25C. 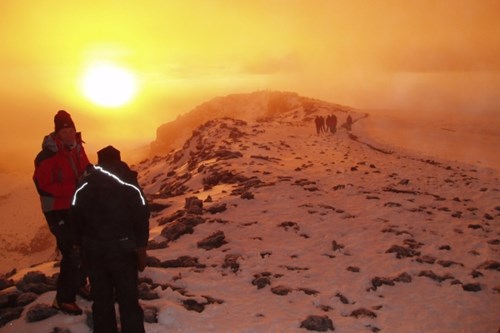 When is the best time to climb Kilimanjaro?

Kilimanjaro can be climbed all year round, however it is generally advisable to avoid November and April / May, which is the short and long rains, however – there is a caveat to that! The seasons are shifting and the timing of the rains less predictable, also the northern slopes are less travelled and less affected by the rains so if you’d like to go at a quieter time then November and April / May deliver less people and if you use the Rongai route, which starts on the northern slopes, it’ll be drier.

How many routes are there on Kilimanjaro?

There are eight routes on Kilimanjaro. Some are ascent only routes, others descent only. Nowadays the five most popular, and not in any particular order, are the 5 or 6 day Marangu route which uses huts, 6 or 7 day Machame route which is a tented route - as are the other remaining routes, the 7 or 8 day Lemosho route, the 7 day Rongai route or the connoisseurs route the 9 day, full circumnavigation of the mountain via the Northern Circuit.

What is the best route on Kilimanjaro?

As for which is best, then it depends on your available time, budget and experience. For sure at Adventure Alternative we never run climbs in less than 7 days as this allows for better acclimatisation. Some companies offer 5 or 6 days but the impact on summit success, by dropping days, is huge and of course the knock-on effects of feeling ill, due to having not acclimatised well isn’t pleasant and can be dangerous.

The Marangu route is quite plain and gradually ascends up and down, whereas the Machame and Lemosho are similar, in that they both join at the Shira Plateau and walk around the southern flanks of the main summit before ascending via Barafu camp to the top and descending via the Mweka route. The Machame route can be done in 6 days, but it’s very advisable to take a minimum of 7 days. Both Machame and Lemosho offer very good acclimatisation as the walk high and sleep low, meaning your body experiences and adapts to the high altitude and low oxygen levels, but you get to sleep lower than your daily high point thus allowing your body to gradually adapt. The Rongai route offers less walk high / sleep low but it does offer quieter trails and less chance of rain, especially if climbing during the wet seasons. Finally, the Northern Circuit route gives you plenty of tine to acclimatise and if you have the time and budget and fantastic 9 day mountain experience as you initially ascend via the Lemosho route on the west of the mountain before circumnavigating the entire summit massif via the northern side before ascending to the summit from the eastern side and then dropping down the south eastern Marangu route. 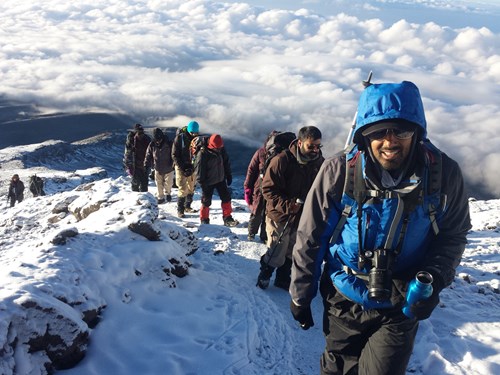 How many days should I take to climb Kilimanjaro?

The speed ascent of Kilimanjaro can be measured in hours, but this is undertaken by professional athletes who are completely acclimatised, incredibly fit and a bit mad! For the rest of us mere mortals then we’ll take the assumption that you’ll arrive into Tanzania and not be acclimatised to nearly 6000m. This means that you must take your ascent slowly and for most this is good news!

We always take a minimum of 7 days to climb, that is ascend, summit and descend. If you have the time and budget for more days, then great. A climb or trek to altitude should never be rushed. It should always have a slow pace, set by a good guide that knows what she or he is doing, and you should have a support team to encourage and assist you by providing good tents, great food and plenty of watchful eyes to ensure you’re doing as much as possible to look after yourself. Many people will drop a day or two and try to climb in 5 or 6 days and the reason is cost. Kilimanjaro is an expensive peak to climb. The permits for a seven day / six-night climb, which includes National Park fees, camping fees and a rescue fee come to just shy of $1000 (correct as of 2020) for a non-resident. As you can see when you add on good food, guides, porters, cooks, assistant cooks and all their costs, transport, hotels etc. it is an expensive peak. By dropping a day or two it can drop the price significantly – however it can also drop your chances of summiting significantly, as you simply don’t have the time to acclimatise as well as you would on a 7 day itinerary, plus you’re covering the same ground in less time so you’re more tired.

After dreaming of climbing the peak, saving up, researching it, buying kit and flights and training, then it’s far better to go for a 7 day approach and reach the summit in great shape so that you can looking down on the sea of clouds and the plains far below and enjoy it! There is no point in failing to summit or reach it and feel terrible - looking only at your feet as you vomit with a massive throbbing headache – that’s pointless. Better to go there, take your time, and enjoy every single moment of every day!