Nepal, officially the Federal Democratic Republic of Nepal, is a landlocked country in South Asia and, as of 2010, the world's most recent nation to become a republic. It is bordered to the north by the People's Republic of China, and to the south, east, and west by the Republic of India. With an area of 147,181 square kilometres (56,827 sq mi) and a population of approximately 30 million, Nepal is the world's 93rd largest country by land mass and the 41st most populous country. Kathmandu is the nation's capital and the country's largest metropolitan city. 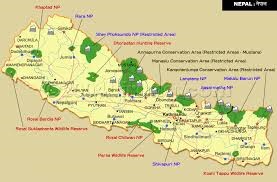 Nepal is a country of highly diverse and rich geography, culture, and religions. The mountainous north has eight of the world's ten highest mountains, including the highest, Sagarmatha, known in English as Mount Everest. The fertile and humid south is heavily urbanized. It contains over 240 peaks more than 20,000 ft (6,096 metres) above sea level.

By some measures, Hinduism is practised by a larger majority of people in Nepal than in any other nation. Buddhism, though a minority faith in the country, is linked historically with Nepal as the birthplace of Siddhartha Gautama, who as the Gautam Buddha gave birth to the Buddhist tradition. About half of the population live below the international poverty line of US$1.25 a day.

A monarchy throughout most of its history, Nepal was ruled by the Shah dynasty of kings from 1768, when Prithvi Narayan Shah unified its many small kingdoms. In 2006, however, decade-long People's Revolution by the Communist Party of Nepal (Maoist) along with several weeks of mass protests by all major political parties of Nepal culminated in a peace accord, and the ensuing elections for the constituent assembly voted overwhelmingly in favor of the abdication of the last Nepali monarch Gyanendra Shah and the establishment of a federal democratic republic in May 28, 2008. The first President of Nepal, Ram Baran Yadav, was sworn in on 23 July 2008.

What Currency is Used in Nepal?

The Nepalese Rupee is the official currency of Nepal. You can find the most up-to date exchange rate here. For information pertaining to ATMs, credit cards, and cash see the Practicalities Section.

What is the Time difference in Nepal?

Nepali time is GMT/UTC plus 5 hours 45 minutes. Check out the current time in Nepal here. The country code for Nepal is +977. For information regarding internet connectivity and cellular service please see our Practicalities Section.

How Do I Charge My Electronics While in Nepal?

Nepal uses a Type D Indian 5 amp BS-546 plug or the European CEE 7/16 Europlug. The voltage is 220-240. Electricity is widely available in larger cities such as Pokhara and Kathmandu. You can charge your electronics along trekking routes in Nepal for a small fee at the teahouses. Keep in mind that many of the more remote areas rely on solar power. If there is a significant snowfall, electricity might not be available. Furthermore, the more remote the area, the more expensive the charge. When sleeping in tents for peaks and climbs, there will not be an opportunity to charge your electronics unless you bring your own battery pack or solar charger.

Remember that batteries do not like the cold. When traveling in cold temperatures you should carry your phone or camera battery close to your body. At night, keep your batteries and electronics in your sleeping bag in order to keep the battery from draining. A portable battery pack or solar charger, although not necessary, is certainly a useful tool while trekking and climbing in Nepal.

What Language is Spoken in Nepal?

Nepali is the official language of Nepal. Nepali uses Sanskrit, a script-based character system. English is spoken on major trekking and tourist routes throughout Nepal. Signs are mainly written in Nepali, although occasionally signs are written in English, especially in areas that are frequented by trekkers, tourists, and climbers.

It is always a good idea to learn a few words of the local language before you arrive at your destination. Even if you can only say hello, it goes a long way in the minds of the local people. Check out Adventure Alternative's list of helpful Nepali words and phrases.

What is the Climate in Nepal?

The climate in Nepal varies by topography. The lowlands in the south are more humid and tropical than the high peaks of the Himalaya.

There are two major seasons for trekking in Nepal, the Trekking Season and the Climbing Season. Big peak climbing is usually done in the spring from March to May depending on what you plan to climb. This is also an excellent season for trekking. Temperatures are certainly cooler than during the trekking season, however skies are generally clear, allowing for excellent views and slightly less crowds.

The peak season for trekking and tourism in Nepal is in Autumn, from September to November. During this time, the temperatures are warmer and the monsoon rains have cleared the skies for the best views. However, Nepal experiences a high volume of visitors during this time, so if you are seeking a little solitude, it will be difficult to find.

It is possible to visit and trek through the lower-elevations of Nepal during the winter months from December to February. Most of the high-elevation treks are snowed in and temperatures are very cold. Many lodge owners shut down over the winter.

The only season when it is not advisable to trek in the mountains is during the monsoon season from June to August. During this time, heavy rains plague Nepal. Due to the steep nature of the Himalaya, trekking becomes quite dangerous, as areas are prone to landslides.

Below are some more resources about Nepal and high altitude.

Altitude and Its Effects