The Serengeti safari covers in ten days a selection of the best that Northern Tanzania has to offer for the wildlife enthusiast - Arusha National Park for a walking safari, Tarangire Park, Ngorongoro Crater and the Highlands, Lake Manyara and the Serengeti itself.

The Serengeti is one of the most famous parks in Africa, renowned for its endless plains, rich grazing grounds and a high concentration of predators, plus of course the Great Migration of over a million wildebeest through the Rift Valley

The Serengeti has a big reputation as a safari destination, and it never fails to surpass expectations. Days spent driving round its huge expanse is an experience in itself, but the wider area is also fascinating from a cultural perspective.

Where to stay in the Serengeti
The Serengeti is best suited to mobile camps, and we would use lightweight safari camps that stay in the campsites while the vehicles go out looking for wildlife. Another option is to use the Taj guesthouse which is not luxury but has ensuite bedrooms, a cooking area and is right in the middle of the park. Our staff would then provide the meals.

For the more expensive accommodation there are numerous tented camps and lodges in the park, such as Kubu Kubu Tented Camp which is very special.

Everything depends on budget and what type of experience you would want, we can advise on what are the best options. 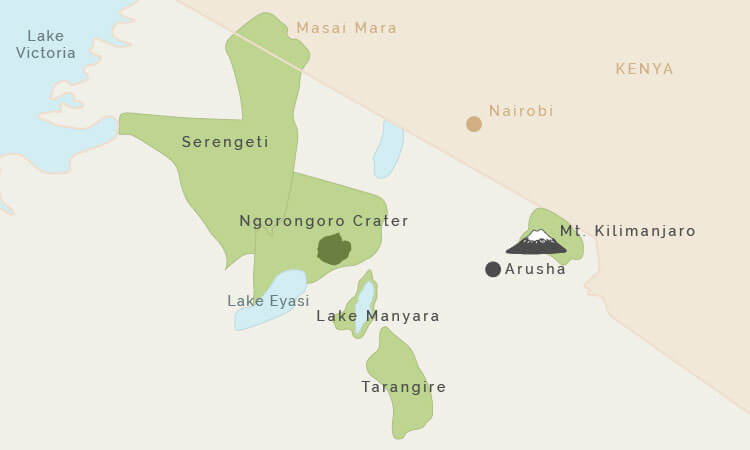 Best time to visit the Serengeti
Game viewing in the Serengeti is possible any time of the year, but April and May have the heaviest rains. At this time however the lodges offer very good value and the game is of course still there. January to March are excellent times, and July to November, when the herds are crossing the Mara river.

Serengeti safari game driving
The days are filled with game driving, best starting early at dawn when the animals are still hunting. There are no night safaris allowed in the park, but there are some private reserves where night drives and walking safaris are allowed.

What to wear on a Tanzanian safari

For your safari you need to consider the elements and ensure you have clothing which will suitably protect you from the sun (suncream, hat, sunglasses, long sleeves, loose fitting and a neutral colour), rain (light jacket) and dust (bandana or scarf). If you are visiting some of the local villages then ladies should ensure that shoulders are covered and shorts are not too short, perhaps bring a sarong. Ngorongoro Crater can be cooler than the surrounding areas so a jumper or fleece is needed, especially when you leave early in the morning. Good binoculars are very useful with your photographic equipment, and water bottles for the car. For the walking safari in Tarangire long trousers are best and a suitable pair of shoes, not sandals. In the evenings normal clothes but remember to cover up and dawn and dusk. Here's a sample packing list for your safari:

Adventure Alternative Tanzania is a fully registered and licensed tour company based in Moshi. Castro Kapela is our operations manager in Moshi and he organises all the staff, equipment, permits and hotel arrangements. You will have his telephone number, or the staff at the hotel desk can call him for you.

Our vehicles are 4x4 safari vehicles which take up to six people comfortably. Large windows and photo hatches in the roof maximize game viewing.

Arusha National Park
The entrance leads into shadowy montane forest inhabited by inquisitive blue monkeys and colourful turacos and trogons – the only place on the northern safari circuit where the acrobatic black-and-white colobus monkey are easily spotted. In the midst of the forest stands the spectacular Ngurdoto Crater, whose steep, rocky cliffs enclose a wide marshy floor dotted with herds of buffalo and warthog.

Further north, rolling grassy hills enclose the tranquil beauty of the Momela Lakes home to thousands of flamingos, the lakes support a rich selection of resident and migrant waterfowl, and shaggy waterbucks. Giraffes glide across the grassy hills, between grazing zebra herds, while pairs of wide-eyed dik-dik dart into scrubby bush like overgrown hares on spindly legs. Leopards and spotted hyenas may be seen in the early morning and late afternoon.

It is also at dusk and dawn that the veil of cloud on the eastern horizon is most likely to clear, revealing the majestic snow-capped peaks of Kilimanjaro, only 50km (30 miles) distant. But it is Kilimanjaro’s unassuming cousin, Mount Meru - the fifth highest in Africa at 4,566 metres (14,990 feet) – that dominates the park’s horizon. 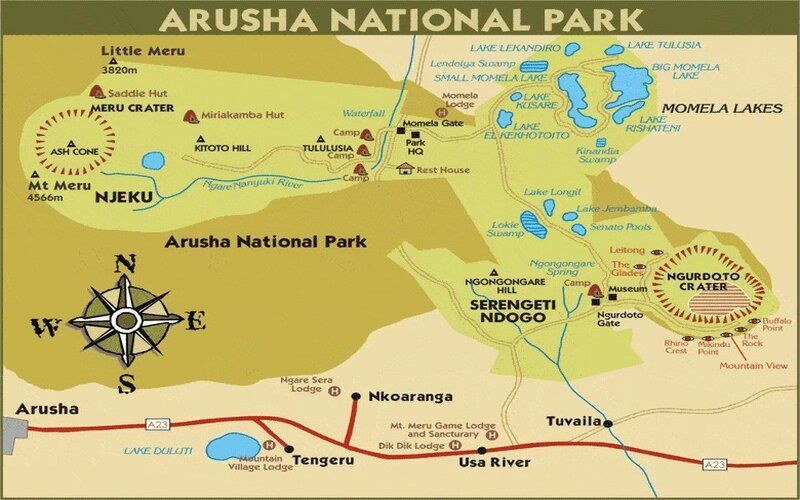 Ngorongoro Crater
World renowned as a place of absolute wonder, Ngorongoro Crater is a deep volcanic crater, dramatically beautiful and permanent home to nearly 25 000 animals with ideal game viewing opportunities all year round, Covering 300 square kilometres in the largest unflooded and unbroken caldera in the world, Ngorongoro supports a large resident population of wildlife including huge grazing herds of zebra, wildebeest, buffalo, eland and gazelle. Near the swamps and forest there are hippo, elephant, waterbuck, reedbuck, and bushbuck, baboons and vervet monkeys. Predatory animals include leopard, cheetah and large prides of lion. The rare black rhino can be seen, as can a wide range of birdlife.

Inside of the Ngorongoro Crater, you can explore the grassy crater floor, the forests, the lakes and the marshes. Lake Magadi is alakaline, caused by deposits of volcanic and are favourite hunting grounds for golden jackal, lion and hyena. Lerai Forest is named after the tall yellow barked acacia trees, where you will find many elephant, while the Gorigor Swamp is home to hippo and many water birds.  But it is on the grassland where the sheer proliferation of animals is overwhelming, a safari spectacle that is truly worthy of the description of the 8th wonder of the world. 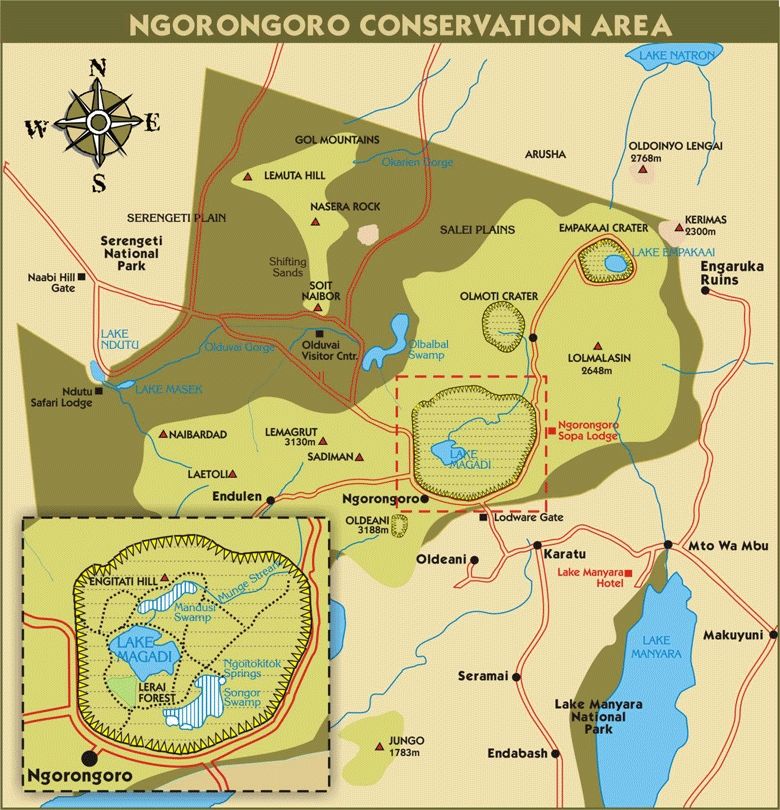 Tarangire National Park
Close to Mto wa Mbu and possessing a unique combination of landscape and vegetation, dominated by the large number of baobab trees and an almost unparalleled number of bird species, as well as a diverse number of wildlife including the highest number of elephant in all the parks of northern Tanzania. A photographers paradise, you can find all the major grazing animals such as kudu, giraffe, zebra, wildebeest, eland and impala. Leopard, lion and cheetah are therefore also not far away, and during the dry season Tarangire offers a superb game viewing experience against an azure blue sky and the backdrop of dun hills and green forest.

Serengeti National Park
The Serengeti is Tanzania's most famous National Park and goes all the way to the Kenyan border. The park is teeming with stunning wildlife. It is thought that over 3 million large mammals roam in the Serengeti in vast open plains punctuated by rocky outcrops. The extensive grasslands are interspersed with Kopjes - rocky outcrops like islands in the flat plain, each with their own Wildlife communities.

Each year around the same time the great wildebeest migration begins in the Ngorongoro area of the southern Serengeti of Tanzania. A natural phenomenon determined by the availability of grazing. February marks the start of this great migration, preceding the long rainy season when wildebeest spend their time grazing and giving birth to approximately 500,000 calves within a 2 to 3 week period. Around October, nearly two million herbivores travel from the northern hills toward the southern plains, crossing the Mara River, in pursuit of the rains. In April, they then return to the north through the west, once again crossing the Mara River.

Is the Serengeti safe to visit?
Yes it is safe to travel to and in the Serengeti, as long as you keep to the rules! Don't leave your vehicle, don't take a wander outside the lodge or camp perimeter and don't feed the animals. You will only meet other tourists and local staff, drivers and cooks and so on.

How do you get to the Serengeti?
Fly to Kilimanjaro international airport (KIA) in Tanzania which is about 50 kms from the town of Arusha. From there it's a 4 hour drive north to get to the park.

How many days do you need in Serengeti?
Serengeti is a huge national park so we would recommend minimum four days in order to properly explore it and find the wildlife. Being so large, you do need to spend time driving around looking for the Big Five, which takes time. Plus in four days you'll experience different weather and a variety of safari experiences.

What is the best time of year to visit Serengeti?
Wildlife viewing is possible throughout the year, the animals don't mind the rain, but for us tourists it's nice to go in the dry season from late June to October with the wildebeest migration in August an absolute highlight. Remember during the rainy season it might be cheaper in the lodges but the long grass makes it harder to spot animals.

How much does it cost to visit Serengeti?
National Parks in Tanzania are expensive to visit and Serengeti is the most expensive along with Ngorongoro Crater. This is because of additonal fees outside the park entry of USD$70.00 per day for adults ($24.00 for children under 13). There is also a special transit fee of $70.00 going in and out the park. Camping is around $30.00 per person per day and vehicle entry is $30 per day too. All the lodges and tented camps are costly, around USD$500.00 for double room or tent per night.

What animals will you see in the Serengeti?
This huge park supports a massive diversity of wildlife, from the Big Five (lion, leopard, elephant, buffalo and black rhino - to a a great range of plains animals such as giraffe, Grant's gazelle, impala, kongoni, topi and eland to name a few. The park is famous for its annual migration of over1.5 million white-bearded wildebeest and 250,00 zebra and also for its numerous Nile crocodile and honey badger.

Which is better Serengeti or Masai Mara?
The two parks are very different in size first of all. The Mara in Kenya is only about 1500 sq kms in size, but the Serengeti is 30,000 sq kms. But the north of Serengeti joins the Mara and becomes similar and hilly with more trees. The Serengeti is so vast that you cannot doubt it's sheer variety and abundance of wildlife, plus you can really find the classic 'plains of Africa' here.

How many lions are there in Serengeti?
Serengeti has the largest population of lions in Africa, an estimated 3000 in the whole park which is 5700 sq miles in size. Being such a huge area you do have to look for them though, but it's undeniably worth it when you do. Large prides on the open plains is what people come here for.

Serengeti safari cost is £1645.00 for this itinerary on this web page based on five people travelling, but most itineraries are flexible and custom made according to different preferences. 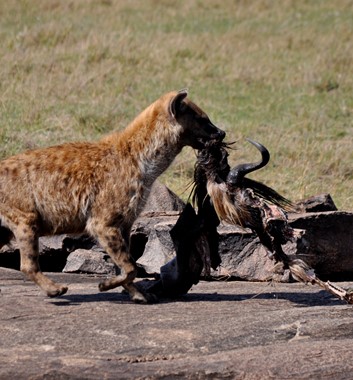 All round safari for ten days taking in the best of the northern area, perfect for families and staying in a combination of mobile tented camps and hotels.