Russia is by far the largest country in the world covering more than 6.5 million square miles and spanning 11 time zones! It is also the ninth most populated country with 142 million people and spans the whole of north Asia and 40% of Europe. It has many different land forms and environments and the planets largest mineral and energy reserves. It’s lakes are also home to ¼ of the worlds fresh water. Russia also has access to the Atlantic, Arctic and Pacific Oceans. 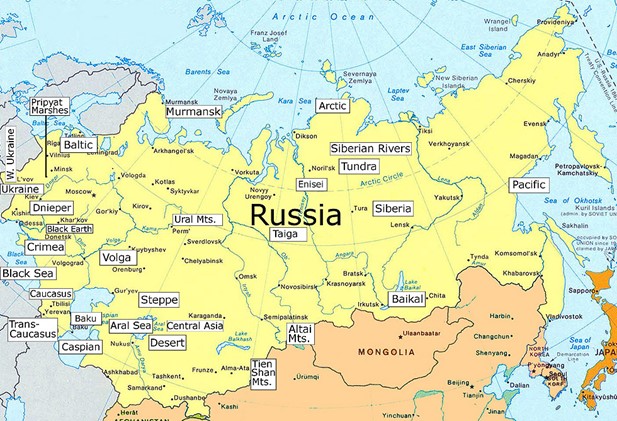 A Brief Cultural History of Russia

Historically Russia is a fascinating country from the Kievan Rus to Tsardom to Imperial Russia through to the Soviet days and right up to modern times and her Super Power status.

Most of Russia consists of vast stretches of plains that are predominantly steppe to the south and heavily forested to the north, with tundra along the northern coast. Russia possesses 10% of the world's arable land and has Mountain ranges along the southern borders, such as the Caucasus (containing Mount Elbrus, which at 5,642 m (18,510 ft) is the highest point in both Russia and Europe) and the Altai (containing Mount Belukha, which at the 4,506 m (14,783 ft) is the highest point of Asian Russia); and in the eastern parts, such as the Verkhoyansk Range or the volcanoes on Kamchatka. The Ural Mountains, rich in mineral resources, form a north-south range that divides Europe and Asia. Russia has an extensive coastline of over 37,000 km (22,991 mi) along the Arctic and Pacific Oceans, as well as along the Baltic Sea, Sea of Azov, Black and Caspian seas.

Russian Orthodox Church would be the main religious group however, the vast majority of Orthodox believers do not attend church on a regular basis. Nonetheless, the church is widely respected by both believers and nonbelievers, who see it as a symbol of Russian heritage and culture. Smaller Christian denominations such as Roman Catholics, Armenian Gregorians, and various Protestants exist. Islam, Buddhism and Judaism are also traditional religions and deemed part of Russia's "historical heritage"

There are over 160 different ethnic groups and indigenous peoples in Russia. Ethnic Russians with their Slavic Orthodox culture, Tatars and Bashkirs with their Turkic Muslim culture, Buddhist nomadic Buryats and Kalmyks, Shamanistic peoples of the Far North and Siberia, highlanders of the Northern Caucasus, Finno-Ugric peoples of the Russian North West and Volga Region all contribute to diverse and rich culture of Russia. The ethnic culture is preserved in various museums and ethno-parks, reproduced in cuisine, architecture, cinema and arts, and developed by folk bands, dance ensembles and choirs.

What Currency is Used in Russia?

The Russian Ruble is the official currency of Russia. You can see today's exchange rates here. For more information regarding accepted currencies and ATMs see our Practicalities page.

What Is the Time difference in Russia?

Russia spans a whopping 11 different time zones. From +2 UTC in Kaliningrad all the way to +12 UTC in Kamchatka. Check out the current local times in Russia. The country code is +7. International calls in Russia are extraordinarily expensive by most country’s standards. It is advisable to either rely on internet calling in major cities, or purchase a local SIM card. However, keep in mind that cellular service in Russia works a little differently. Each city is on a different network. Therefore, you will incur roaming charges if you buy a SIM card in Moscow and attempt to make calls in say, Kamchatka. Therefore, if you want to call home regularly, you should obtain a new SIM card in each area you plan to visit.

Cellular service is widely available in cities, but outside of the cities service quickly becomes spotty. There are also quite a few rules regarding making calls while in Russia. If you don’t want to bother with the headache, consider downloading WhatsApp, an application that can make digital calls if there is WiFi available.

For more information regarding WiFi and communication, please see our practicalities section.

How Do I Charge My Electronics While in Russia?

Russia uses a Type C Europlug as well as the Type E and Type F Schuko. The voltage is 220-240. Electricity is widely available in larger cities and towns throughout Russia. Electricity even exists on huts along Mt Elbrus. However, whenever you are camping or in remote areas, electricity may be un-reliable or unavailable. Consider bringing a supplementary solar charger or battery pack to re-charge your electronics.

Remember: batteries hate cold weather! Make your electronics last longer by keeping them on your body during the day, and in your sleeping bag at night.

What Language is Spoken in Russia?

Russian is the official language of Russia. English is not widely spoken or written in Russia. All of our guides at Adventure Alternative can understand and speak English, however, outside of that do not expect to hear much English. Most of the younger generation do speak or know at least a little English. However, learning the Cyrillic alphabet prior to visiting Russia is extremely helpful.

What is the climate in Russia?

The climate of the Russian Federation varies hugely due to the enormous size of the country and the remoteness of many areas from the sea result in the dominance of the humid continental and subarctic climate, which is prevalent in European and Asian Russia except for the tundra and the extreme southeast. Mountains in the south obstruct the flow of warm air masses from the Indian Ocean, whilst the plain of the west and north makes the country open to Arctic and Atlantic influences.

Throughout much of the territory there are only two distinct seasons — winter and summer; spring and autumn are usually brief periods of change between extremely low temperatures and extremely high. The coldest month is January (February on the shores of the sea), the warmest usually is July. Great ranges of temperature are typical. In winter, temperatures get colder both from south to north and from west to east. Summers can be quite hot and humid, even in Siberia. A small part of Black Sea coast around Sochi has a subtropical climate. The continental interiors are the driest areas.