What Vaccinations do I need for Tanzania?

We advise that you schedule an appointment with your doctor, or a travel doctor a few months prior to coming to Tanzania because there are vaccination requirements, in particular if you are coming from a country where yellow fever is endemic. It's a good idea to be sensible about the level of exposure to disease, and different areas of the country present different levels of risk.

For all of our destinations and activities, like climbing Kilimanjaro or going on a safari, you will not be coming into contact with rabid animals so the risk of rabies is not high, unless you plan to travel to rural areas. Similarly you will not be coming into contact with stagnant water; however there is no guarantee that salads, ice or fruit purchased locally might not have been washed or prepared with boiled water so it is advisable to consider vaccinations like Hepatitis A and even typhoid. It would also be a good idea to ensure you are up to date with your tetanus booster, and consider polio and diphtheria. The Doctor will advise what is best,

Malaria is probably the biggest concern for any visit to Tanzania and it is important that you take an anti-malarial prophylaxis before, during and after your visit. There are a number of anti malarial prophylaxes available to buy, a GP or travel clinic will advise which is best.

Even though mosquitoes do not live in the cold high climate of the mountains, you will still need to take the tablets for the period before and after climbing the mountain and definitely if you are on safari. This is true if you are only staying in Moshi; despite the altitude there are still mosquitoes in Moshi and it's important to protect yourself. If you have children with you, then there is a children's dose of Malorone available.

We have a specific page dedicated to the subject of avoiding malaria which we recommend reading, but most of all don't be complacent about this because Tanzania is a high risk malarial country and it only takes one bite from an infected anopheles mosquito to contract the disease.

Mosquito repellants normally have DEET as an active ingredient and they come in different strengths between 30% and 100%. Popular opinion suggests that the 100% version on your skin is not advisable because it is a strong chemical used as a pesticide but some companies like Sawyers use a 30% solution releases the DEET over a period of time and is also effective.

Some opinions suggest you should only use the stronger 100% DEET on clothing or materials, but again there are pros and cons to using it; another chemical that works on clothing is called permethrim which is also used as a pesticide.

It is worth doing some research on which product you want to buy, this consumer report is a useful summary of the pros and cons between Deet and Permethrim as tick repellants, while this article by the American Mosquito Association is also helpful. This expert Review site offers a selection of commercially available products, and this Incognito brand sells natural mosquito repellants.

As some countries list Tanzania as a Yellow Fever endemic country you may also be asked for a certificate after departing Tanzania and arriving at other destinations.

Basic Swine Flu checks are carried out at the main points of entry to Tanzania. This will mean somebody taking your temperature before entering the airport building.

What is the Water Quality in Tanzania?

The water out of the tap throughout Tanzania is unfit to drink, however it is suitable for showering and washing your hands. Be sure to take care to keep your mouth closed while showering. Use bottled or treated water when cleaning your teeth.

On Kilimanjaro the cooks will boil water to fill water bottles and this is safe to drink, and similarly on safari.

We want to avoid people buying disposable or single use plastic bottles for water so we advise bringing a lifetime bottle (like Nalgene) and treating the water. One option is a steripen which uses ultraviolet light to kill bacteria and viruses , and another is LifeStraw which uses filters to remove contaminants.

Western style, sit toilets are common in hotels in major cities and in safari lodges. Along trekking routes on Kilimanjaro, the quality and cleanliness of toilet facilities vary widely, usually a long drop squat style toilet with a wooden privacy shed meaning there is a slat-opening in the floor where your business goes and a long drop to the bottom of the pit.

The most well known hospital in the Arusha area of northern Tanzania where most of our clients visit is the Selian Hospital which has a hospital outside the city and a clinic in the city. In Moshi the biggest and most popular hospital is the Kilimanjaro Christian Medical Centre where there is also a special altitude treatment area run by the Kilimanjaro Search and Rescue services.

The facilities are not the same as Western hospitals, and it is likely that severe cases will be evacuated to either Nairobi or back home. Having adequate travel insurance to cover repatriation, medical treatment and also helicopter rescue is a must.

Is it safe to travel in Tanzania?

Tanzania is a safe country to visit, especially if you are part of an organised group climbing Kilimanjaro or going on a safari. The UK Foreign Office offers advice about safety and security in Tanzania but the rule is obviously to be sensible about travelling alone after dark, keeping valuables hidden and to a minimum, and not upsetting local people with insensitive behaviour.

Read more about Safety on Kilimanjaro including emergency procedures and working with the guides to decide when to go down and visit the hospital for altitude related illnesses.

For holidays to Northern Tanzania which includes the popular safari circuits, Mount Kilimanjaro and Mount Meru, the nearest airport to flt into is Kilimanjaro International airport (IATA code JRO) which is served by the following airlines:

Another option if you are flying via Kenya is to take the coach across the border, a journey of about six hours.

Getting a Tanzanian visa

Most passport holders need a visa to enter Tanzania; you can obtain an e-visa before travelling or you can buy a single entry visa at the airport on arrival which lasts for three months. You must hold a passport valid for a minimum period of six months to enter Tanzania and all visitors have to submit biometric fingerprints and photographs on arrival and departure. You receive your visa stamp at the Visa on Arrival counter when you arrive.

The cost of a single entry e-visa is USD$50.00 (the exception being US citizens who must pay USD$100.00). Multiple entry e-visas are USD$!00.00 and we recommend paying in dollars cash if you are applying on arrival.

You'll find more information on this page about preparing for Kilimanjaro which includes bringing adequate cash to pay for your visa and other expenses during your trip.

What Is the Time Difference in Tanzania?

Tanzania time is GMT/UTC +3 hours and does not utilise daylight saving scheme. The country has one time zone and operates under Eastern African Timezone (EAT). As a general rule, sunrise is at 0630 and sunset is at 1830. 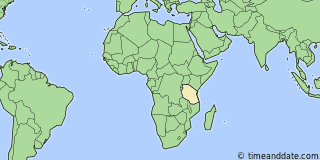 How to use your phone internationally without charges

Your unlocked GSM phone will work in Tanzania but international calls and data usage will be expensive using your foreign SIM card. We recommend turning off your mobile data, turning off automatic downloads and restricting app use in the background. You can also use airplane mode to avoid roaming charges but obviously you won't be able to send or receive text messages or phone calls.

Connect to a wi-fi network to use messaging apps like WhatsApp, Facetime, Messenger, Skype or Google Voice. You can use your other apps on the wi-fi network but you could also use some of your apps offline. For example you can pre-download maps on Google maps before leaving home.

You could also buy a local SIM card. The main mobile providers in Tanzania are Vodacom, Airtel and Tigo. Both of them work on Kilimanjaro but the signal is patchy. Vodacom has the widest coverage in the country and a SIM card is currently about 3000 Tzsh.

You can also buy a pre-paid international SIM card, for example TravelSIM which works in many countries and offers data as well. There are no costs for incoming calls or texts.

The Tanzania Country Code is +255.

Money and cash in Tanzania

ATMs are available in most popular areas and the official currency of Tanzania is the Tanzanian Shilling (TSH). US dollars are also widely accepted, so we would advise bringing cash dollars for your visa on arrival ($50) and for changing into local currency. Bring lower denomination notes and avoid damaged or very old notes

Credit cards are widely accepted, however there is usually a high service fee for using a credit card so do check about costs for paying bills or withdrawing cash from an ATM.

Tanzania uses plug types D and G. Type G plug is a standard UK plug, while the type D plug has three round pins. The voltage is 220-240V. Electricity is widely available in larger cities and urban areas throughout Tanzania. However, along trekking routes and in game reserves and national parks, there is no access to electricity except in the lodges. We advise that you bring a power pack for charging your phone, tablet or other items while on your holiday.

What Language is Spoken in Tanzania?

The most widely spoken languages are Swahili and English; most Tanzanians speak Swahili between but in major tourist areas English is widely spoken. All of our guides speak English and you will be able to communicate very easily.

Is tipping usual in Tanzania?

Tipping in Tanzania is not expected but it is certainly appreciated. At restaurants as a general rule tip between 5% and 10%. On safaris and climbs of Kilimanjaro however, tipping is customary and we recommend a driver/guide and the cook to receive about $10 per day for a tip based on a full car load of visitors. On Kilimanjaro the rate would be USD$100.00 per guide and cook for a seven day trip, and $70.00 per porter, but please remember to provide this money in local currency.

Tipping on Kilimanjaro can be quite fraught, we have more information to explain how it works, but we strongly recommend against giving the cash to the guides before the end of the climb. Instead, gather the money in advance of the climb and change into local currency and hand it to Castro Kapela at the gate on your final day. He will manage the handing out of tips at the same time as paying the salaries.

Vegetarian and vegan diets in Tanzania

We can provide people with prefer a vegetarian diet and to some extent a vegan diet, but the range of products on sale in the shops is rather limited. Similarly there is not a wide range of gluten free products for celiacs or for people with specific food allergies.We therefore do recommend talking to us in advance and discussing about bringing some food items with you from home.

Tanzania information
About Us