Tanzania is bordered by Kenya and Uganda to the north, Rwanda, Burundi and the Democratic Republic of the Congo to the west, and Zambia, Malawi and Mozambique to the south. It eastern border lies on the Indian Ocean. It is about the same size as Nigeria (945,000 sq km). The country used to be called Tanganyika under British colonial rule but changed to Tanzania in 1961 after independence. The country then united with Zanzibar to become the United Republic of Tanzania under the first President Julius Nyerere.

The capital is Dodoma, although the coastal city of Dar es Salaam remains the principal city; and with more than 127 ethnic groups, each with its own language, Swahili is the official language although English is widely spoken.

Geologically, the northeast of Tanzania has a number of volcanoes which appeared in the Great Rift Valley - Kilimanjaro, Meru and Oldonyo Lengai are the most famous ones - while to the northwest are the great lakes of Victoria (Africa's largest) and Tanganyika (Africa's deepest). The central area of the country is a large plateau of plains and arable land, while the eastern shores are hot and humid.

Tanzania is a large nation and has a varied equatorial climate. Overall the climate is tropical, with hot and humid coastal areas while the northwestern highlands are cool and temperate. In the highlands of the northeast temperatures range between 10C and 20C while the rest of the country rarely drops below 20C. Generally the hottest period of the year is November to February and the coolest period from May to August.

Tanzania also has two rainy seasons in the northern and eastern regions, the short and long rains. The short rains known as Vuli happen from October to December, while the long rains known as Masika are from March until June. In southern, central and western parts of the country there is only one rainy season between December and April.

Global climate change has blurred the traditional dates of the rainy seasons, which has an impact on climbing Kilimanjaro, because clearly the best times to attempt a summit would be during the dry periods from June to October. Nowadays however there can still be rains in July and longer rains can start early in September.

For up-to-date weather information on the mountain you can check out snow-forecast.com or see our Climate Information Page.

The warm Tanzania climate lasts from mid-December to March, roughly corresponding with the rainy period of the south, west, and central region of the country.  From June to October, it is generally colder and drier across the country.  Temperatures on Mount Kilimanjaro and Mount Meru drop below freezing at night.

Knowing the temperature and climate during the month in which you want to climb Kilimanjaro is clearly of great importance in preparing for Kilimanjaro and in particular your Kilimanjaro packing list.

November - December
This is the beginning of the short rains in Tanzania’s North. In late this period, the herds of wildebeest arrive on the plains of the Serengeti from the Mara and then continue to migrate further South spreading across the plains.

January - March
The animals are now settled in the South and East of the Serengeti; the South of Seronera around Ndutu area and includes the North of the Ngorongoro Conservation. This is the calving season where most wildebeest calves are born in the window around February.

April - May
Gradually the animals begin to migrate Northwards seeking fresh grazing water. The area around Moru Kopjes and west of Seronera is then hectic with the might movement of hundreds of thousands of wildebeest and including the Thomson Gazelles and zebra. Some of the migration then head due north of Seronera, but most are usually further west.

June
The wildebeest migration slows down around the Grumeti River in the Western Corridor, concentrating here. The river here is normally a series of pools and channels, but it's not continuous – and so whilst they always represent an annual feast for the Grumeti River's large crocodiles, these aren't usually quite as spectacular as the crossings of the Mara River, further north.

July - October
They migrate towards Northeast Serengeti (Bologonja and Ikorongo and Ikoma Game Reserve) to Maasai Mara in Kenya.Only those animals (excluding predators) which can stand without surface water for long periods and adapted to the poor forage remain there. The biggest and the most demanding task for the animals is when they have to cross Mara Rivers in the North. Many animals drown or get caught and eaten by the crocodiles whilst lions await them on the other side.

November
When the pasture has been exhausted in the North and Maasai Mara, this army of animals surges back to the now green pastures of the Serengeti North and continue to migrate South…and the cycle begins all over again…

Tanzania is formerly known as Tanganyika, a name that was given to the country by a British civil servant in the early 1920’s (Tanga meaning sail and Nyika meaning arid plain). The previously known German East Africa became known as Tanganyika Territory. In 1964, Tanganyika was joined with Zanzibar and other offshore islands to become what is known as today: United Republic of Tanzania.

Being a former colony of both Germany and Britain, architectural styles in Tanzania reflect Arab, German, and British influence and occupation. There is also a long rich history of slave trade and other goods that can be seen in the architectural remains and buildings of the coastal towns and Zanzibar Island (The Portuguese, Arabs and Indians  and Chinese were also involved in this trade). For instance, ruins of Arab mosques as well as nineteenth-century stone houses on narrow streets can be seen in Bagamoyo, which was one of the main endpoints of the East African slave trade. There are also tombs embedded with Chinese ceramics dating to the twelfth century.

Suburban dwellings include the Swahili house, a rectangular structure made of either stone with a corrugated roof or earth on a wooden frame with a thatch roof. This type of house is found all along the coast and was strongly influenced by Indo-Persian culture during the 13th and 14th centuries. 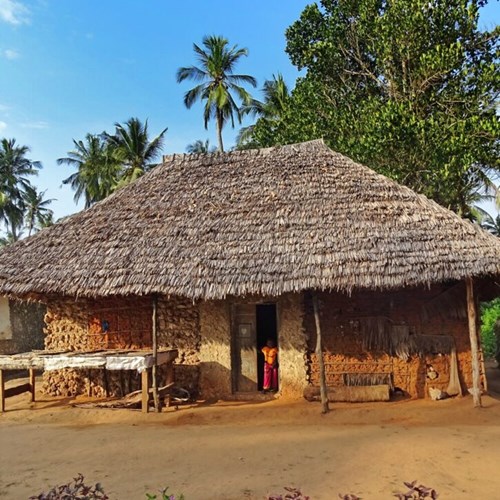 Tanzania has a harmonious national culture that is based on a subtle but strong social code of courtesy and respect with politeness, respect and modesty being virtues that highly valued in the community. The ability to keep control of one's temper and emotions in public is highly valued, and this repression is true of mutual affection as well. Boys and men however commonly holds hands in public as a sign of friendship or comradeship

There are many factors that have contributed to the national identity of Tanzanians.

There are more than 120 ethnic tribes in Tanzania, the largest being the Sukuma (over three million), and the Chagga, Haya, and Nyamwezi with over one million each. They are all united by the use of Kiswahili, a coastal Bantu language with Arabic influence.

In his quest for his people to identify themselves as one people the first president Julius Nyerere encouraged all Tanzanians to communicate in Swahili, which facilitated trade, political debate, nationalism and information.

English is also spoken by most of the Tanzanians of post-secondary education in addition to their tribal languages. When traveling it’s always a good idea to go with a little local language knowledge.

The staple food in Tanzania depends on the region that one is coming from. The people from the North West prefer plantains, those from the South West prefer Ugali and those along the coast prefer rice. These staple carbohydrates are accompanied by a fish, beef, goat, chicken or mutton stew or fried pieces of meat, along with several types of vegetables such as beans and sukuma (greens), pumpkin or sweet potatoes.

Walking along the streets especially in urban market areas, many local delicacies are sold such as fried plantains, sweet potatoes, charcoal roasted maize on the cob, pieces of dried or fried fish, mshikaki, grilled pieces of meat, samosas, and chapatis to name a few.

The extended family is the basic family structure. In most cases, the man is the head of the home and usually makes all major decisions. Throughout the nation, children are raised with the strong influence of parents as well as close relatives, friends, and neighbours. Elders are honoured and respected by the rest of the community.

In rural areas especially, the role of women and girls is basically to take care of the household chores, take care of children and work in the fields. The men also work in farms, care for their livestock and make the important family decisions. However, all these roles are changing gradually with the increase in development, and increased girl child education.

These divisions of labour however are not so pronounced in urban areas. The market economy has placed significant pressure on the stability of the domestic unit and the extended family. Educated, wealthy family members are often called upon to provide resources to other family members for their education and general welfare.

Tanzania is popular for its sophisticated indigenous healing systems found in almost all Tanzanian ethnic groups. Healing can cure almost anything ranging from barrenness and infertility, as well as love matters, psychological problems, social problems such as finding a job, a lover, or even financial breakthrough to complicated chronic and infectious illnesses. All these are facilitated by the mganga (medicine man/ traditional healer). Predicated on a holistic approach to health, traditional healers treat body, mind, and spirit as an integrated system, often in the communal sense of the ‘social body.’

Christianity and Islam are the main religions in Tanzania, although Islam is more predominant in the coastal regions.Traditional beliefs and minority beliefs such as Hinduism and Sikhism can also be found.

Religion plays a big role in Tanzania and major events such as Easter and Christmas, Ramadhan and Eid are big events in the annual calendar which are shared by the whole extended family and community.

Major Holidays and Festivals in Tanzania

Dar es Salaam and Zanzibar are the best spots for enjoying the many festivals in Tanzania. Here a few notable festivals that happen every year. Aside from the festivals mentioned below, Eid, Christmas, and Easter are also popular holidays. Be aware that Eid changes every year, so be sure to check your calendar.

Kiliman Adventure Challenge: A triathlon event that includes a hike up Mt Kilimanjaro, a mountain bike ride around the great circumference and a Kilimanjaro Marathon. Happens in February.

Kilimanjaro Marathon: This is a road race under the view of Kilimanjaro. The event even includes a half marathon. Happens in February.

Karibu Travel and Tourism Fair: A fair with many items for purchase from gemstones to safari gear. It’s the largest of such festivals in East Africa. Happens in Arusha around May/June.

Festival of the Dhow Countries: A film and music festival in Zanzibar. Happens in early July and goes for two weeks.

Mwaka Kogwa Festival: Happens in Zanzibar where the local men beat each other with banana stalks to settle arguments from the previous year. There is a big fire and a feast. A four day event happening in July/August.

Bagamoya Arts Festival: The town of Bagamoya between Dar es Salaam and Zanzibar holds a week-long event in September that celebrates music and dance.

Serengeti Wildebeest Migration: December through February the wildebeest numbers are at their peaks.

We strongly advise visiting the UK Foreign Office website and checking for current advice on law and order in Tanzania, especially with regard to prevailing cultural, religious and political environment in the country. If you are any doubt as to what to do in a given situation it is usually possible to identify the "safest" fallback option and go with it. For example, not buying something, not taking a photo etc.

Some laws which may be relevant to foreign visitors are:

Tanzanians are welcoming and well disposed towards visitors but do be sensitive to local culture. Try to follow some sensible rules:

Tanzania information
About Us