This fifteen day trip in-country includes ten days trekking in the stunning Langtang region of Nepal, which is the closest National Park to Kathmandu and requires no internal flights to reach it. The Tamang Heritage trail adds a circular loop to the trek which avoids going the whole way up and down the same path. There is also an option to add on a summit of Yala Peak which adds three days to the trip.

The area is renowned for its beautiful cedar forests and flowers and jaw dropping views of soaring Himalayan peaks including the mighty Shishapangma which is one of the 8000 metre peaks, Manaslu Massif, Ganesh, Langtang and Jugal Himal. The Tamang trail is a relatively new circular addition to the route which promotes an income to the Tamang hill people who settled in the area. 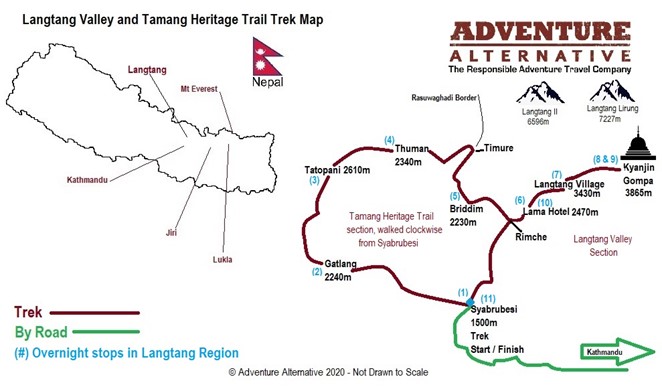 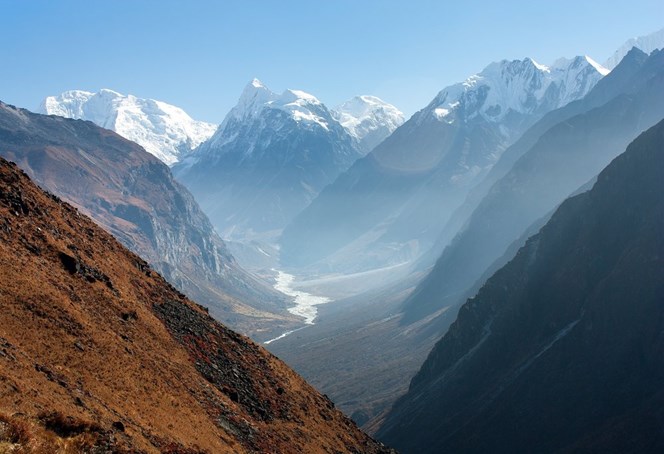 Langtang is situated north of Kathmandu and borders Tibet. The terrain is mountainous but not precipitous with forests, terraced hill slopes and valley paths leading to high pastures and eventually the moraine of the glaciers and peaks. It does not reach the same heights as the treks in the Khumbu valleys and therefore has far less of the altitude related issues.

The Tamang Heritage trail visits an area where the people who originally came from Tibet as horse traders settled in Nepal several hundred years ago. They have a distinct Tibetan identity with Tibetan and their own language with colourful dancing and interesting customs. The Tamang villages in Langtang were badly affected during the 2015 earthquake and this trek helps promote an income to the villagers.

Below are a couple of independent clips covering the area:

Description of the Langtang Valley trek

The overall distance is in the range of 95km. You do not need to be super-fit for the Langtang trek section however the Tamang Heritage Trail section does have some moderately challenging ascent sections. The entire trek has mostly 6 hours days of sustained walking with a light backpack - your main pack goes by porter. The effects of altitude will tax your body, though this trek is not overly high, plus the pace is slow and the rate of ascent very gradual.

The trek follows a well trodden path all the way through which can be rocky and uneven in parts and there is no need of any rock climbing or ‘mountaineering’ nor specialist equipment. Walking poles are useful though. Higher up, the open slopes and moraine may give you added reassurance with a pole, but again the path is quite easy to follow and of course you'll be in the expert hands of your guide. 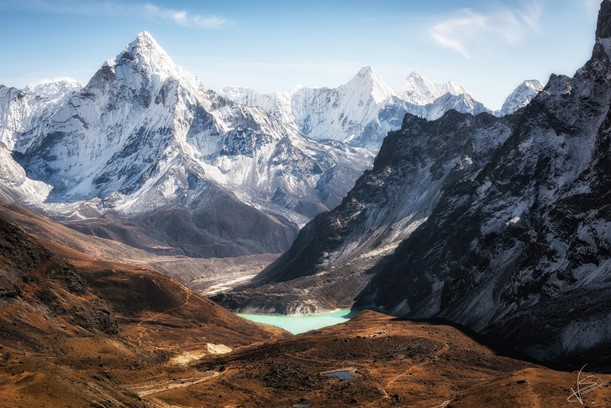 ALTITUDE PROFILE FOR THE LANGTANG VALLEY AND TAMANG HERITAGE TREK 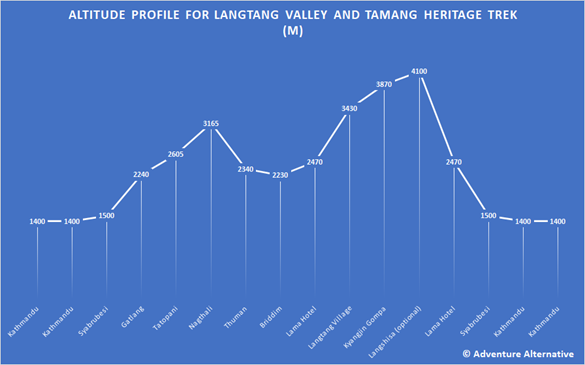 Accommodation varies between the more traditional Tamang Heritage Trail and the central valley section. The former is less westernised and more rural. This specific area was badly hit by the Nepal earthquake so you have a mixture of traditional lodges and in many places new builds, though of traditional style. The second section of the trek, up into the Langtang Valley is in comfortable and more established lodges. Accommodation in both sections are run by local families. Each lodge has a central communal area with a large stove that provides heat and a cosy atmosphere. The bedrooms are unheated and generally have two beds per room with mattresses, pillows and a blanket. You will need to bring a sleeping bag (3 season is normally enough) and we'd recommend a pillow case.

The lodges generally have showers and toilets with the first section being more basic and the latter powered by gas and with sit down flush toilets (some lodges do also have squat toilets). Food in the lodges is very good quality, a mixture of local Nepali food and in the Langtang western recipes. You will find a Nepal price guide here. There are also many shops selling all types of drinks and snacks, sweets and chocolate. You can also buy any gear that you may, or forget on the trail or in Kathmandu.

Normal trekking clothes and some warm layers for the evenings and a rain jacket are needed for this trek. You won't need any specilist equipment or kit. Have a look at our Nepal Trekking Kit List page for information about what gear and clothing we recommend.

The basic idea of the kit needed is to keep you warm, dry, protected from the sun, able to move comfortably in the mountains and able to be comfortable in the evenings and night. The main points to cover are as follows:-

Kathmandu has an area called Thamel which is full of hundreds of equipment shops, each one an emporium of new, used, quality and fake equipment all very reasonably priced for rental and buying. You can buy anything needed for any trek.

IS THE LANGTANG VALLEY AND TAMANG HERITAGE TREK GOOD FOR A FAMILY TRIP?

The Langtang Valley trek is a great itinerary for people thinking about trekking in Nepal with their children. The days are not too demanding, the views and scenery is beautiful and the villages and people interesting and friendly. It's not too high, there are none of the precipitous bridges crossing torrents and gorges plus it's not too busy an area and it's close to Kathmandu.

WHAT IS THE TAMANG HERITAGE TRAIL?

The Tamang Heritage Trail has only relatively recently been opened up for trekkers. It offers a lovely addition to the Langtang trek. It is an excellent way to experience the culture of the local Tamang people who live here. Life is very traditional along this unique trail and slower than on the main trails. With more tradition you can expect less westernised lodges, but a warm and friendly welcome and of course amazing views and fantastic flora and fauna.

WHAT IS THE HISTORY OF THE LANGTANG TREKKING REGION?

The Langtang National Park is a protected area where the majority of residents are Tamang and the climatic zones range from subtropical to alpine. It remained unknown until Bill Tilman’s expedition in 1949, the same year that the Royal Geographic Society and the Alpine Club asked for permission to explore the south side of Everest; this was refused, but Tilman was allowed into Langtang, where he searched for a way into Tibet. He discovered a pass (still called Tilman’s Pass) beyond Gangchempo leading south through the wild Jugal Himal and back to Kathmandu.

Today, despite the road going up the Trisuli Valley all the way to Dhunche, the valley is still a less visited area compared to the Khumbu or Annapurna regions. The Park has similar climatic pattern to Sagamartha National Park, but the subtropical area to the south ensures a wider variety of animals, including musk deer, Himalayan black bears and the Himalyan tahr (a large ungulate), langur monkeys, ghorals, and the rare snow leopard and red pandas.

Trees include oak, blue pine, birch, maple and in the springtime the hillsides are heavy with rhododendron flowers. The valley also boasts several glacial lakes including Gosainkunda Lake which is sacred to Hindus and a possible add on to your trek if you have a few more days. There are also lot's of very high technical peaks and lower trekkig peaks which can also be added to you itinerary such as Yala Peak.

A deposit of £100.00 is required on booking to secure your place and we ask that the remaining balance (trip price minus the deposit) is paid in full 6 weeks prior to your departure. When you book with us you're given your own secure online account which you can access 24/7. Through this account you can edit your booking, add flight, health, insurance and dietary details and also make interim payments. We make payments as flexible as possible and you can choose, if you wish, to pay a bit off your trip fee whenever it suits you.

This trek supports the Tamang Heritage Association because the route passes through their land and staying in their community lodges allows them to benefit from tourism revenue. 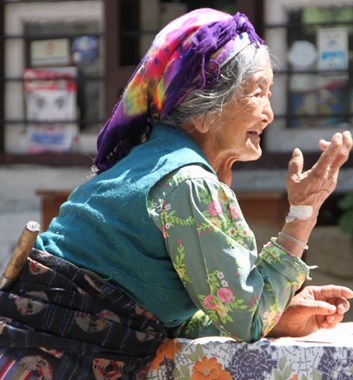 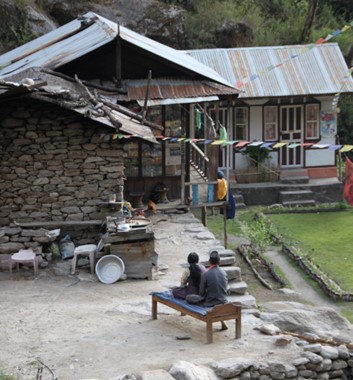 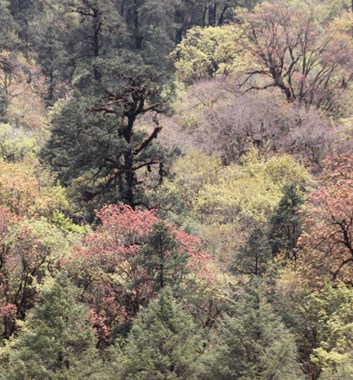 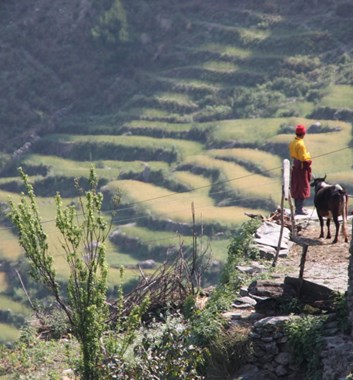 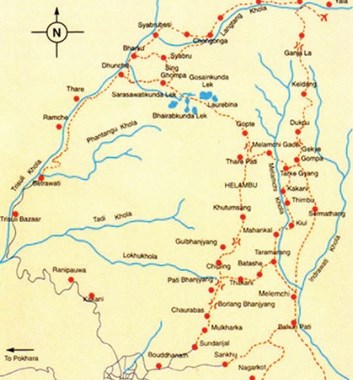 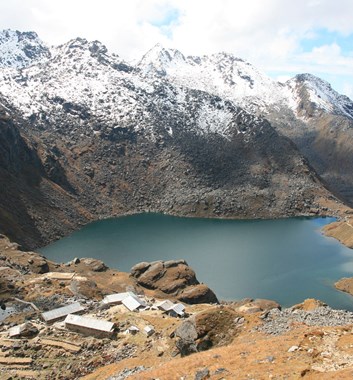 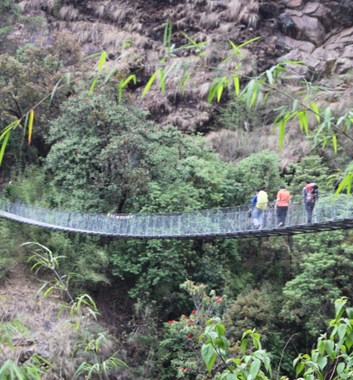 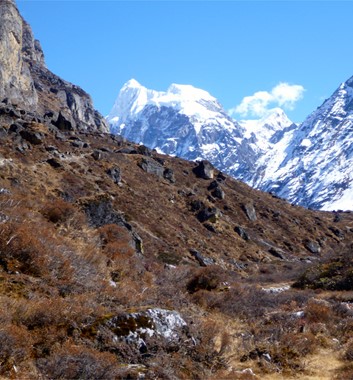 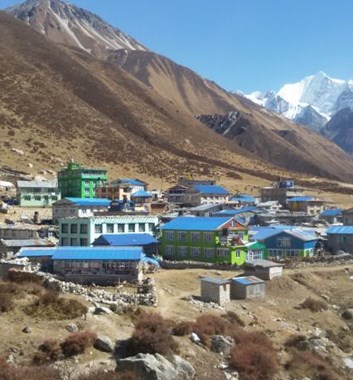 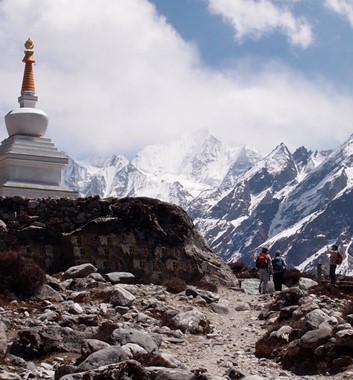 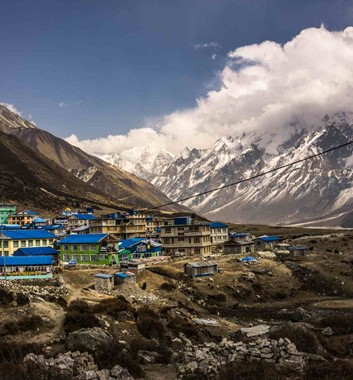 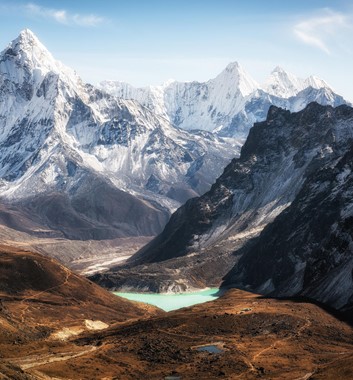 C1 strap-on crampons suitable for most boot types - B1, B2 or B3 rated. They also come with a bag and anti-balling plate.

Three day climb of Yala Peak. First day from Kyanjin gompa to the high camp, second day up to the summit and back to the Kyanjin, and the third day is a weather day which could be used as acclimatisation or an extra day at Kyanjin or a day to walk up to Tserko Ri.

Bed and breakfast in the 3 star Hotel Manang in the heart of Thamel in Kathmandu. Base pice is per person for three nights in a twin or double room.

This luxury hotel in central Kathmandu is a blend of modern day sophistication and cultural heritage with its 100-year-old palace and the newly designed structure of the hotel.

Bed and breakfast in the famous Kathmandu Guest House in Thamel, central Kathmandu. Base pice based on three nights sharing a twin or double.