We offer a unique chance to fly over the Himalayas in a glider with world class pilot Klaus Ohlmann, the first person to fly over Everest in a glider and holder of numerous aerial world records. Adventure Alternative is the UK agent for this experience which is offered for one person planning to visit Nepal for a period of two weeks between December and March. 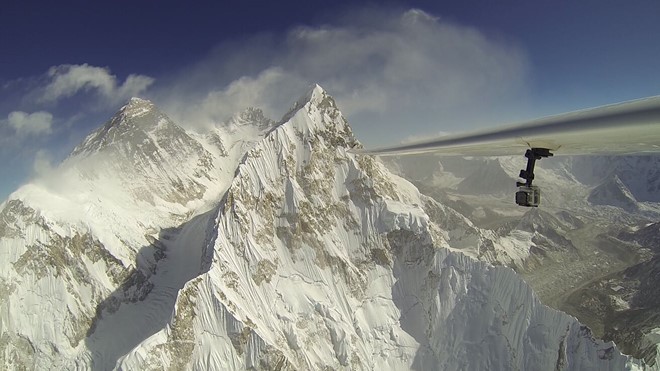 The experience of flying over 8000 metres in Nepal with Klaus begins at Pokhara Airport in a Stemme S10VT glider, the very same plane used to make the first historic pass over Everest in 2014. Onboard cameras are used for spectacular footage throughout, and the double cockpit allows a 360ᵒ view of the mountains. 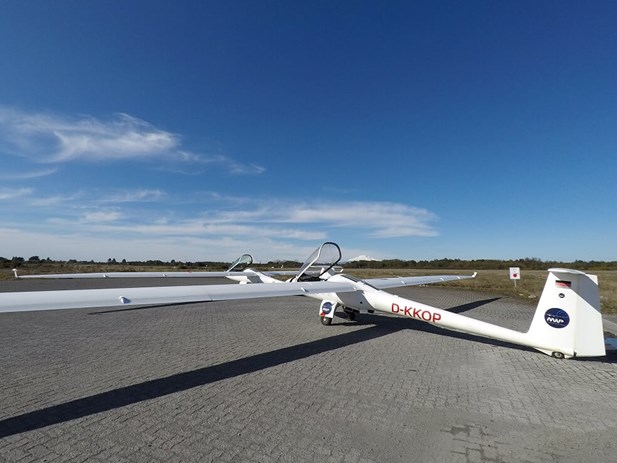 The Stemme glider has a double cockpit and during the two week holiday you will make several introductory flights before attempting the main journey flying past 8 of the 8000m peaks including Everest.

From Pokhara the route heads to the Kali Gandaki gorge, ascending to an altitude of 6000m after which the motor is stopped and this high performance glider climbs on the thermals to the higher jetstream where it really becomes a Ferrari of the air.

Flying over the Kali Gandaki after taking off from Pokhara. A height of 6000m is reached initially and then the motor is stopped. The glider then catches the thermals to rise a further thousand metres and beginning the journey over the Himalayan giants.

Surfing the impressive Himalayan range over the mighty Dhaulagiri and Annapurna, the glider is in a constant climb of 1000m towards Manaslu, with the breath-taking Tibetan plateau and peaks of Shishapangma and Cho Oyu to the left, until eventually it soars towards the Everest massif itself to circle Quomolungma, the mother of the universe according the Tibetan Buddhists, and the triumvirate of mountains which also includes Lhotse and Nuptse.

Continuing eastwards this remarkable journey visits the third highest peak on the planet Kanchenjunga before descending back to the lowlands and landing again at Pokhara. 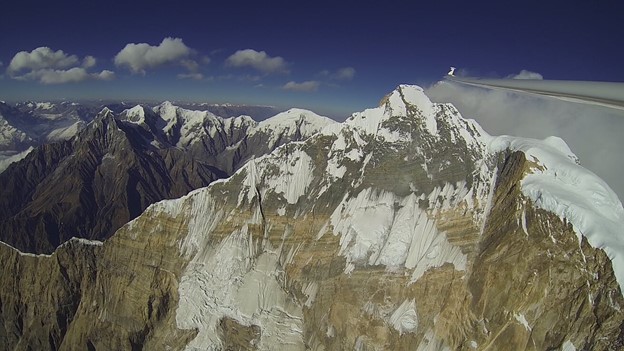 Klaus Ohlmann has mastered the art of riding the waves of high altitude jetstream winds in order to achieve supreme length of journey in a glider. 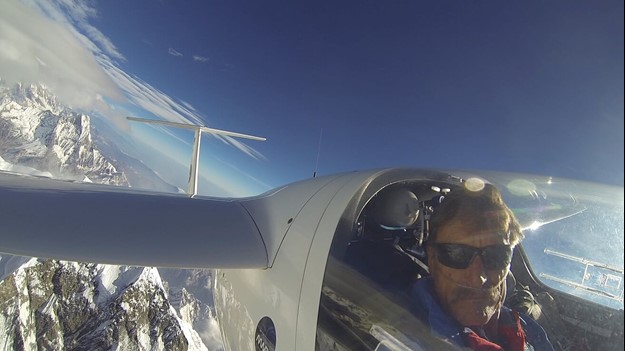 Klaus Ohlmann is the recognised world expert on 'wave riding' and has achieved many records for his exploits in the glider, including the first glider flight over  Everest and the longest uninterrupted glider flight ever recorded.

The jetstream is a strong band of wind which undulates as it flows over the mountains. Much like a surfer rides a wave on the sea, Klaus uses the updrafts of air to gain altitude in the glider and reaching speeds of 200 kilometres per hour. This technique requires considerable skill and experience, and Klaus is the recognised master; aside from the world record for flying to the highest altitude he also holds the world record for flying the longest distance.

The Stemme glider is itself a marvel of technology, superbly built and tuned to perform at such high altitudes and over great distances. This spectacular flight offers the chance for an experience in the air like no other, soaring over the giant peaks of the Himalayas, with a professional pilot of world class standard. 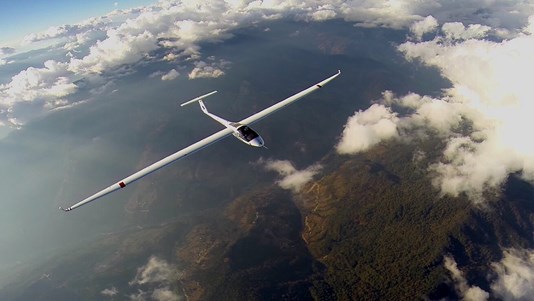 How is this experience different to ‘normal’ glider flights in Nepal?
Local gliding and paragliding companies offer short flights up to 4000m in a restricted area near the Annapurna range. We have the special authorization to fly much further throughout the Himalayan range, visiting the far west of the country.

Our experience is in a specially built glider which can fly much higher and has the highly specialized oxygen systems on board to fly over 8000 metres. There is very little comparison between standard gliding trips and this unique gliding experience which requires world class skills to fly in such a demanding environment.

What insurance would I need for this flight?
Clients are covered in pilot`s passenger insurance, details will be taken prior to the trip and an additional amount applied to the trip cost for the premium.

What is the best time of year to do this adventure?
The best time is from the beginning of November to the end of February when the jetstream is needed for flying at such high altitudes.

What would be the broad itinerary?
Clients would visit Nepal for a two period, staying in a top hotel, during which there would be up to five days of gliding around the Annapurna region acclimatizing to the flying and gaining experience with being in the plane, culminating in the special flight over the main 8000m mountains detailed above.

Weather and wind conditions need to be perfect for the main flight over the 8000m peaks but during the months of November to March there is a very good likelihood of having those conditions within two weeks. If not then the client would have the right to repeat the flight in following months.

What requirements are expected of me?
There are no special requirements for this experience but a medical examination is advised in case of any special risk to altitude exposure. Each individual will talk with Klaus before booking to discuss the particulars of the flight and any issues relating to specific health issues.

What safety measures are taken, what training is provided and what type of equipment is provided?
The safety of the glider is paramount and Klaus Ohlmann is in charge of the integrity of the plane. There will be briefings and preliminary training is provided in the use of the oxygen system on board the glider. There will also be up to four preliminary flights in the Pokhara region first of all before embarking on the main Himalayantrip.

Who is Klaus Ohlmann?
Klaus Ohlmann (68) is a four-time world champion and, with over 60 world records, the most successful glider pilot of all time. In addition to his successful practice as a dentist he runs his own mountain flying school "Quo Vadis" in southern France. Wiki.

He has specialized in long range and high altitude flights and is holder of the FAI glider world record for the longest free distance of 3009 kms uninterrupted flight and also is the first person to fly over Mount Everest in a glider. His world record for the fastest ever speed reached in a glider of 307 km/h remains unbroken in a decade.

He has perfected the art of ‘wave riding’ in a glider, a specific skill in catching updrafts in the jetstream in order to fly long distances. In 1998 he founded Mountain-Wave-Project, a research facility  with the aim to make gliding more visible in an exciting contrast between science, adventure, spectacular landscapes and records.

He has also been involved as a pilot in electric airplanes and is an ambassador for renewable energies used in aircraft. In 2014 he was the chief pilot of a German Aerospace scientific mission to the Himalayas , taking high tech cameras to high altitude and obtaining spectacular high-resolution 3D images of Mount Everest.

Klaus is also an author, filmmaker and an inspiring professional speaker. His exciting lectures are presented in German, English, French or Spanish.

He lives with his wife and two children in his home in the French Southern Alps. 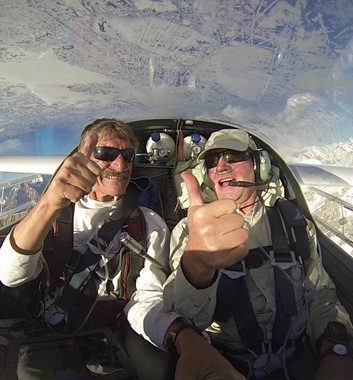 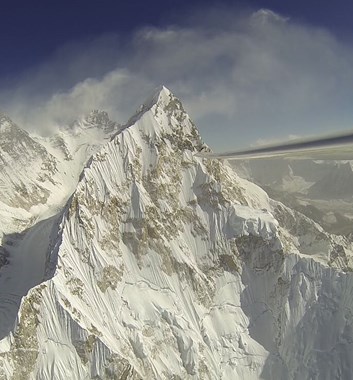 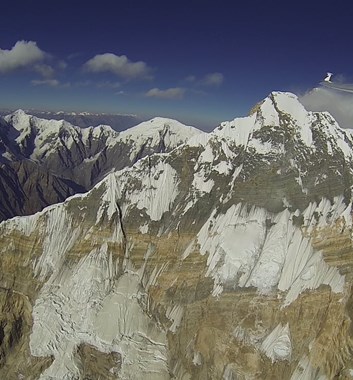 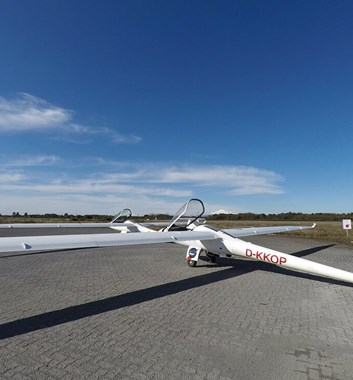 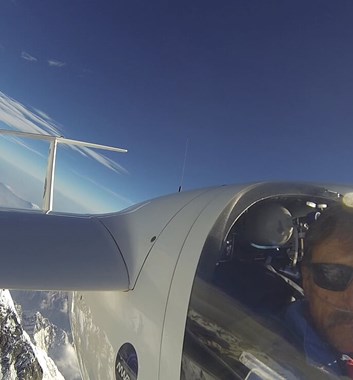 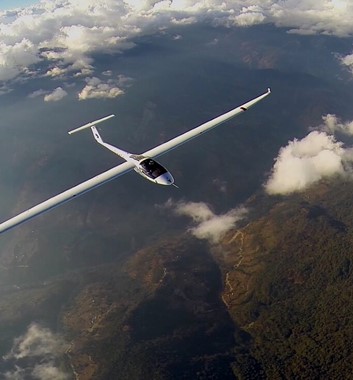 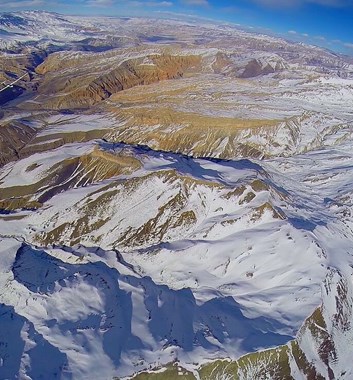