The Republic of Kenya lies across the equator in East Africa, on the coast of the Indian Ocean. It is bordered to the south by Tanzania, west by Uganda, north-west by Sudan, north by Ethiopia and the east by Somalia. With an area of 580,367 square kilometres and a population of over 45 million, Kenya is the world's 48th largest country by land mass and the 30th most populous country. Nairobi is the nation's capital and the country's largest metropolitan city. 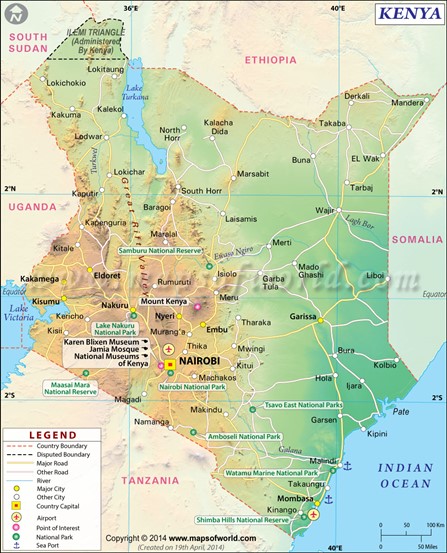 What Currency is Used in Kenya?

The official currency of Kenya is the Kenyan Shilling. You can view current exchange rates here.  For more information pertaining to ATMs and other accepted currencies, please see our Practicalities Section.

What is the Climate in Kenya?

Kenya enjoys a tropical climate. It is hot and humid at the coast, temperate inland and very dry in the north and northeast parts of the country. Temperatures in these areas are fairly constant year-round with an average of 27°C (80°F) at the coast, 21°C to 27°C in the hinterland, while in Nairobi and the highlands over 5,000ft, the daytime temperatures normally range between 19°C and 24°C.

It is usually sunny throughout the year, the hottest periods are between  February – March, and the coldest between July-August. The long heavy rains are from March – May, and short rains from October to December.  The highlands of western Kenya have a single rainy season, lasting from March to September.

In the mountains, expect alpine temperatures. Cool during the day and very cold at night. However, like most alpine conditions if the sun is out it can feel quite warm. Come prepared for wild temperature swings if you plan on climbing peaks.

Remember that you will often be on safari early in the day, and temperatures can be quite chilly. Do anticipate cold weather and dress in layers for the changing weather. If you plan on diving or exploring ocean life while in Kenya, the sea conditions are typically best from October to March.

Few countries in the world can boast of such a wide diversity of activities  and attractions as Kenya. Here you will find breath-taking beauty and great environmental contrasts ranging from spectacular palm fringed sandy beaches to the majestic summits of Mount Kenya, from tropical rain forests to searing deserts; from vast open plains and savannah to acacia woodlands; from small farms to rich ranches and estates of tea, coffee, pineapple, banana, wheat and sisal; from small muddy rivers teeming with hippo and crocodiles to Lake Victoria, the source of the Nile river and the largest lake in Africa, not forgetting the Great  Rift Valley- everything you need for adventure, relaxation and discovery.

Here you will find one of the highest concentration and diversity of wildlife, a vibrant array of cultures and encounter every day beauty of African life, from the notorious matatus in Nairobi streets, the hawkers announcing their goods on a street corner, to the warm innocent joyful welcome you receive from the children when you get to the villages, the beginning of a connection and ‘love affair’ that makes you never want to leave.

What is the Culture and History of Kenya?

Kenya has been called the ‘cradle of mankind’: the place where the first humans appeared. Fossils found in the Great Rift Valley, around Lake Turkana (in the north of Kenya) suggest that hominids (the family of man apes and humans) walked around there over two million years ago.

The patchwork of ethnic groups, which today exist side by side in modern Kenya are the result of the waves of migration, some from as early as 2000 BC, from every corner of Africa – Turkanas from Ethiopia; Kikuyu, Akamba and Meru from West Africa; and the Masai, Luo and Samburu from the southern part of Sudan.

By around the 8th century Arabic, Indian, Persian and even Chinese merchants were trading on the Kenyan coastline. By the 16th century, Europeans realised the potential of the East African coast, and most of the trading towns were occupied by the Portuguese. The Omani Arabs finally ousted the Portuguese in 1720, but it wasn’t long before the coast came into the control of the British in 1895.

The route to independence was marked by the violent struggle of the Mau Mau Rebellion in the 1950s and on 12th December 1963, the British granted full independence to Kenya. Jomo Kenyatta became the first president and after his death in 1978, Daniel Arap Moi took over.  Moi remained in power until the 30th December 2002 when Mwai Kibaki was inaugurated as Kenya’s third president.

What Currency is Used in Kenya?

The Kenyan Shilling is the official currency of Kenya. This is the preferred currency to have on hand while in Kenya. Here are the latest conversion. If you are obtaining a visa on arrival, you may want to carry USD, GBP, or Euros to purchase your visa. For more information on both visas and ATMs please see our Practicalities Section.

What Is the Time Difference in Kenya?

Borneo time is GMT/UTC plus 3 hours. Check out the local time in Kenya here. The country code for Kenya is +254. For information regarding internet connectivity and cellular service please see our Practicalities Section.

How Do I Charge My Electronics While in Kenya?

Kenya uses British BS-1363 socket type. The voltage is 220-240. Electricity is widely available throughout major cities in Kenya. However, on safari, in lodges, and on the mountain, finding an electrical outlet will be a bit of a challenge. Depending on your accommodation there may or may not be any electricity in your room. If so, chances are it is run by a generator or solar power and will not be reliable or only available during certain times of day. It is recommended that you ensure your electronics are charged prior to traveling to rural areas. If you are concerned, back a rechargeable battery pack with you.

What Language is Spoken in Kenya?

Swahili and English are the official languages of Kenya. English still lingers from the time of colonial rule. However, more people are fluent in Swahili than English. However, those who work in the tourism industry do speak English.

It is always a good idea to learn a few words of the local language before you arrive at your destination. Even if you can only say hello, it goes a long way in the minds of the local people. Check out Adventure Alternative's list of helpful Swahili words and phrases.