Khan Tengri roughly translates as 'Lord of the Skies' in Uighur and Turkic language and is also called 'Kan-Tau' meaning 'Blood Mountain' by local Kyrgyz people. The marble in the rock glows red at sunset, like blood, and is a particularly memorable sight on expedition.

It is on the Kyrgyz/Kazakh border in the heart of the central Tien Shan range, close to the Chinese border. It is the highest point between the northern and southern Inylchek glaciers and second highest in the Tien Shan after Pobeda Peak at 7439m.

It was first documented by Russian explorer Piotr Semenov in 1856 when he described a giant snow-white pointed pyramid rising above a magnificent mountain range. Indeed it's shape and symmetry is aesthetically very striking; Russian mountaineer Anatoli Boukreev, who achieved the first solo speed ascent in 1990, described it as perhaps the world's most beautiful peak.

It took until 1931 when a Ukrainian team first reached the summit by the south side in Kyrgyzstan, and the first ascent from the north in Kazakhstan was in 1964.

The marble in rock glowing red at sunset on Khan Tengri. The local Kyrgyz people call it Kan-Tau which means 'blood mountain'.

WHAT ARE THE SNOW LEOPARD PEAKS?

Khan Tengri is one of the five Soviet Snow Leopard peaks being all five peaks above 7000m located in the former Soviet Union. They are:

Khan Tengri is probably the second hardest of the Snow Leopard peaks, Pobeda being the hardest and Pik Lenin being the easiest. There are far fewer foreign climbers on Khan Tengri compared to those from the former Soviet block, access has become easier now because of the helicopter service to base camp. 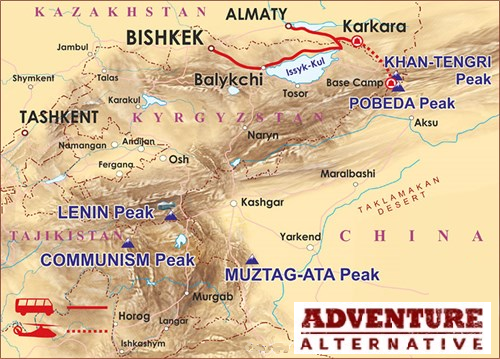 Map showing four of the five Snow Leopard peaks - and also Mustagh Ata in Xinjiang, China which is also over 7000m but not in the former Soviet bloc.

* As in all big expeditions the climb period has no fixed itinerary due to so many variable factors. The altitude profile below is based on one possible climb phase. We have plenty of time to acclimatise and practice skills.

WHAT IS THE ROUTE AND GRADE OF CLIMB ON KHAN TENGRI?

Our trip flies into Almaty in Kazakhstan and takes a helicopter up to the base camp on the glacier and ascends the North Face of the mountain with three high camps, and then joins the west ridge to the summit at the col between Khan Tengri and Chappaev. This classical route was first climbed in 1974 and is also known as the Solamatov route, with Russian grade 5b or Alpine D or IV/V UIAA.

It is worth noting that the Russian grading system is one of the oldest in the world and almost uniquely takes altitude into consideration. The grading factors include: 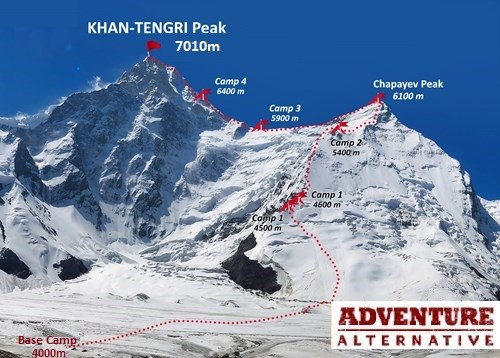 Classic north side route of Khan Tengri following an obvious ridge to Camps 1 and 2, crossing the col and making a final high camp at 6400m. From the summit it is possible to descend all the way back to Camp 1. 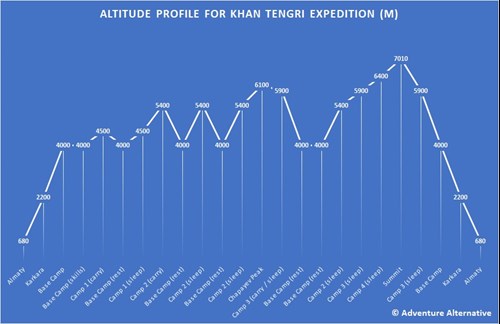 Click on the image above for a larger version

WHAT EXPERIENCE IS NEEDED TO CLIMB KHAN TENGRI?

Confidence with Alpine AD or Scottish 2/3 with previous experience at altitude and self-sufficiency camping high. This is a strenuous expedition with high level carries up to 25kgs, so very good fitness and good knowledge and experience of managing yourself, at times in extreme weather, over several weeks. 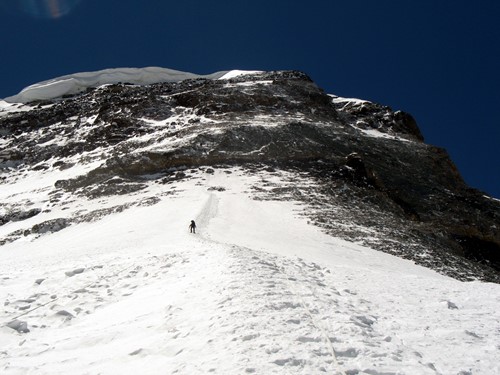 Climbing above 5800m on Khan Tengri between camp 3 and 4. Mixed climbing, high altitude, exposed ridge but not technically demanding. Although at this altitude any activity becomes difficult, and a small pack will seem much heavier.

WHEN IS THE BEST TIME TO CLIMB KHAN TENGRI?

Being the most northerly 7000m peak in the world, the climbing season in quite short running from mid July to end of August. The north side has severe weather from northerly winds and hurricanes are not uncommon. 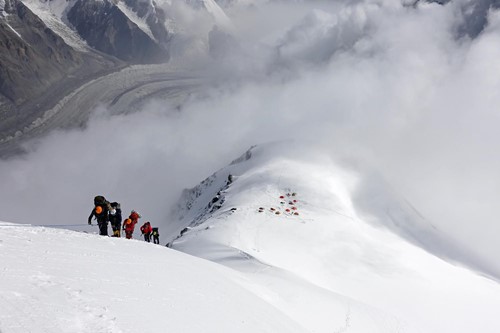 Climbing above Camp 2 with the clouds rising up from the glacier below.

Trip cost of Khan Tengri is on sliding scale based on numbers. 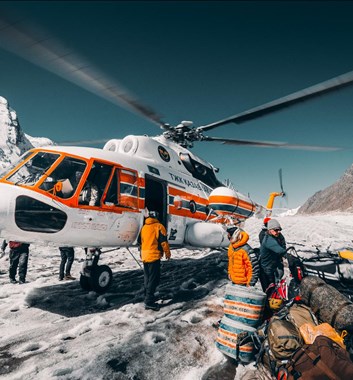 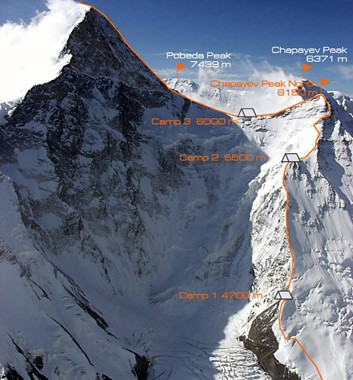 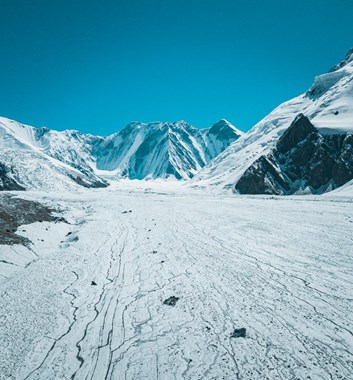 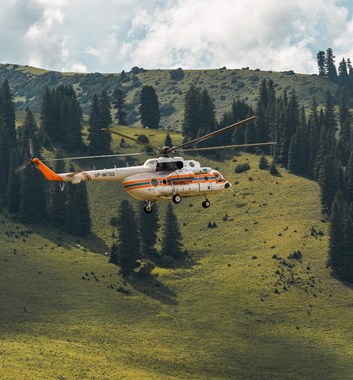 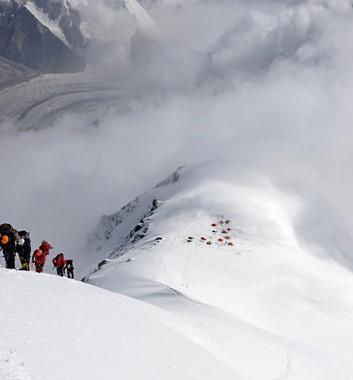 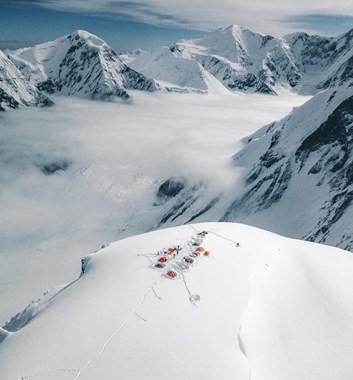 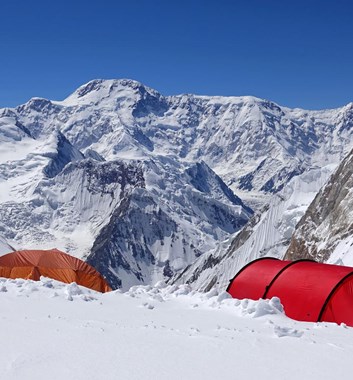 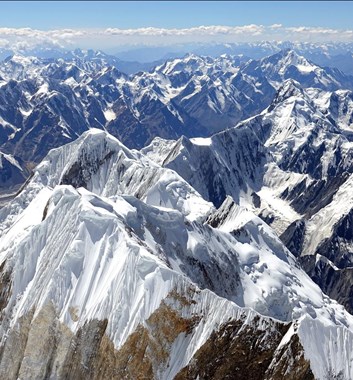 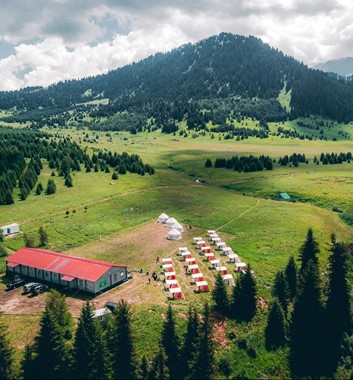 £100 deposit secures your place & you can spread the balance payments