This is a fascinating two week trek through the remote Baliem Valley on hunting trails in Papua's central highlands, staying in local Dani villages and culminating in a visit to the annual Tribal Festival, when all the various highland tribes come together for a mock war and big party in Wamena – it's a photographers dream and a remarkable experience.

Part of the interest is in the natural environment, but staying in local homes and being immersed in the culture to experience an ancient way of life that is deeply in tune with the local environment is equally as fascinating. It is the type of isolated wilderness in which communities only survive by working together and establishing a cohesive social structure.

Th highlight is the visit to see the Baliem Valley Festival, also known as the pasola festival, when all the diverse tribes from the highlands of Wamena and the Baliem Valley such as the Dani, Lani, and the Yali congregate to celebrate their annual festival. This year the festival will be in August, high in the Jayawijaya mountains on the Indonesian side of the island of New Guinea. The festival includes mock tribal warfare held to maintain the agility and preparedness of the tribes to defend their villages.

These battles are accompanied by Papuan traditional music of Pikon, a musical instrument made out of wood bark which is difficult to play and produces a soothing and melodic sound. Additionally the festival aims to preserve the values and culture of the traditional tribes with art and culture, including traditional dances, pig racing, Puradan Rattan Spear Throwing and Sikoko Spear games.

This is not one of our most strenuous treks in terms of the distances that you walk or the altitude that you travel to. However, it is quite committing with the heat and humidity and the nature of the experience itself. Generally you walk with a small rucksack wearing good hiking boots and trekking clothes, sleeping in the homes with a lightweight sleeping bag. Food is all provided locally and there is an English speaking local guide to lead the teams.

Travel in the Baliem Valley

The Baliem Valley sits in the centre of the Indonesian half of the island of New Guinea. The valley is walled in on both sides by the high mountain ridges of the Sudirman, Maoke, Star and Jayawijaya ranges. The valley its self is at an altitude of between 1600-1700m with its surrounding peaks rising to over 4000m.

As a consequence of its geography the valley was not know to the outside world until 1938 when a reconnaisance flight from a zoological expedition flew over it. Even to this day the only practical way to access the valley is by flying to the airstrip of Wamena. Prior to the 1940's the communities of the valley lived in a way that had changed little since the stone age, including using polished stone for blades and axes.

There are three main tribal groups living in the valley; the Yali, the Dani and the Lani. Each tribe has its own distinct language and cultural practices. All do share some common practices, one of the more famous being the penis-gourd or Koteka, worn by most of the men of the tribes. Many of the men will little else, other than perhaps a wooly hat!

Inevitably, with different tribal groups all occupying a single 'walled' region, there was a long history of some degree of inter-tribal conflict. Legend had it that some tribes would also eat their vanquished enemies. Nowadays the annual Baliem Valley festival plays host to a mock war where the tribes meet and celebrate their own and their shared cultures.

The tribal communities largely live by subsistence farming. They cultivate sweet potatoes, sago palm and taros, a broad-leafed plant that is mainly grown for its root tuber or 'corm'.

Raising pigs is also another essential part of the local food supply. Pig feasts therefore form a very significant part of the cultural rituals of the area such as celebrations. Pigs also usually form the dowry given by the prospective groom to his bride-groom's family. Social superiority is also inevitably measured in part by the number of pigs a family own.

The cultural rituals of the local communities have evolved over millenia and most of the practices can be traced to the essential aspects of survival in a remote and isolated region. One example is the taboo associated with sex for a woman within 2-5 years following giving birth. This would ensure that each child received undivided attention through their most vulnerable early years.

Local village houses are made from the natural materials available to them. The Dani build oval-shaped huts with a framework of wood in-filled with straw and heavy thatching to keep out the rain. Open fires are used cor cooking and also to keep out the mosquitos.

The best time to visit the Baliem Valley in terms of weather is the season from March til September. This will ensure that you miss the worst of the regions high rainfall. However, even during this time the global location and local geography make it inevitable that there will be some rain and possible disruption to the internal flight to and from Jayapura.

When flying to West Papua on the island of New Guinea your international flight will arrive at Sentani Airport near to Jayapura City; (Bandar Udara Sentani) (IATA: DJJ, ICAO: WAJJ).

Flights can be rather expensive due to the number of connections so do shop around and consider using flight comparison sites such as SkyScanner.com.The most economic way to fly to Jayapura (Sentani) is often to buy two seperate tickets; a return to Jakarta and a return from Jakarta to Jayapura. There are a few operators flying this final leg and their ticket prices can vary a lot. Please do note however that if you have two seperate tickets and you miss a connection, the airlines have no obligation to re-schedule your second leg. Therefore it is wise to leave a large amount of time for connection between flights.

British nationals need a visa to enter Indonesia. You can get a 30-day visa on arrival at a cost of US $25. You will also need a permit to travel to Papua and West Papua. The UK FCO advise that entry requirements can change at any time, so you should get the latest information from the Indonesian Embassy in London before you travel and talk to us about helping you with the relevant permissions. It is recommended that you carry your passport with you at all times when travelling around Papua.

Baggage
Do check the baggage allowance for you particular airline and flight. Also, be sure to mark your bags clearly with your own name and address and the contacts for Adventure Alternative (which will be advised prior to departure).

Vaccinations and Travel Health
You will need to visit your GP well in advance of your trip to discuss vaccinations; we recommend asking about; Primary courses and boosters: diphtheria; tetanus; hepatitis A; typhoid. Also consider:  hepatitis B; Japanese encephalitis; cholera.

A yellow fever vaccination certificate is required from travellers over 1 year of age coming from areas with risk of yellow fever transmission.

You are also advised to enquire about anti-malarial medication. Anyone known to have allergic reactions to insect bites should carry their own EpiPen.

We have a contract with Interhealth in London which can provide expert travel advice and guidance on travel in any country. Benefits include:

Insurance
You will need a policy that covers trekking in the rainforest and to moderate altitude. There are plenty of companies to choose from, such as DogTag, Campbell Irvine, Snowcard or STA Travel.

We encourage people to buy insurance as soon as you have booked your flight and trip, in case there is a need for cancellation. Do also take your papers with you and make sure your team mates and group leader know where it is, in case somebody else needs to make a phone call for you.

This is an optional addition to the trip for people who want to explore this interesting peak.

Puncak Trikora was until 1963, known as Wilhelmina Peak, Puncak meaning Peak. It’s exact height has been of some debate over the years but the accepted height of the summit is 4750m. Perhaps one of the factors in this debate is the fact that it is the third highest peak on the continent of Oceania, only just behind Puncak Jaya (4884m) and Puncak mandala (4760m).

The name Trikora was chosen in 1063 to commemorate a speech by the first president of Indonesia, Kusno “Sukarno” Sosrodihardjo. The speech is known as the Trikora, Tri Komando Rakyat, or "People’s Triple Command". The command being: to defeat the formation of an independent state of West Papua, raise the Indonesian flag in that country, and be ready for mobilization at any time.

The local Dani people who live near Lake Habbema at the foot of the mountain call it Ettiakup.

Trikora sits in the Maoke/Jayawijaya Range which forms part of the mountainous the spine of New Guinea, running East-West across the island.

Despite being in the tropics the peak does occasionally receive a blanket of snow on the summit. At the time of its first recorded ascent in 1913 the upper regions still hosted a permanent ice cap. From around 1936 the ice cap was observed to be in retreat and around 1962 it had disappeared altogether.

The vegetation on an ascent of Trikora ranges as you ascend. We find mountain rain-forest then scrub beech trees,  grassy swamp, tree-ferns then alpine scrub to lichen-covered scree then bare rock on the summit.

Note this price does include internal Flights from Jayapura to Wamena but this is to be paid locally.

**Please speak to us to confirm that we have the minimum required group size before you book any flights.

A deposit of £100 is required on booking to secure your place and we ask that the remaining balance (trip price minus the deposit) is paid in full 6 weeks prior to your departure. 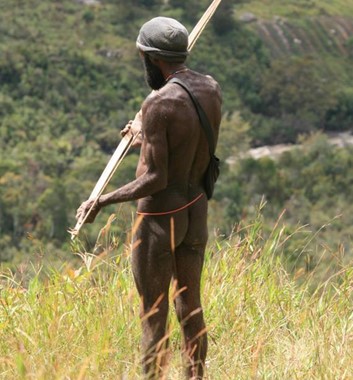 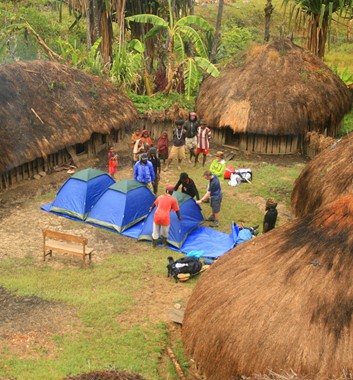 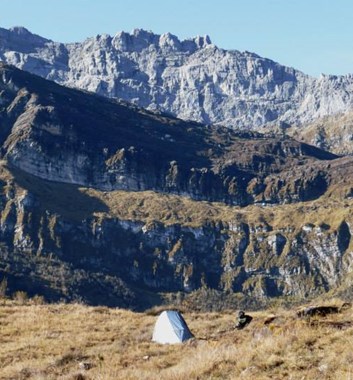 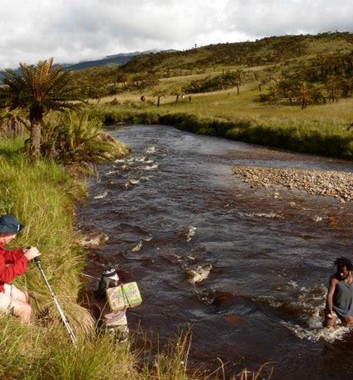 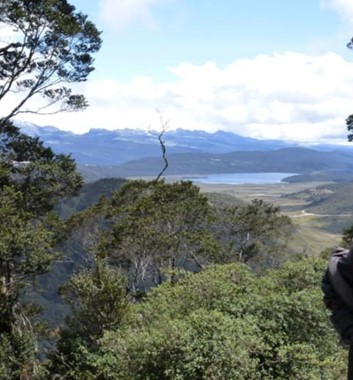 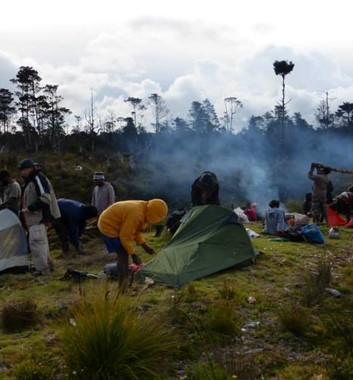 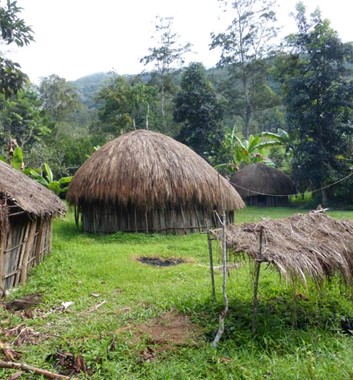